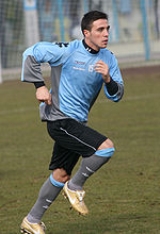 Encyclopedia
Berkant Göktan is a Turkish
Turkey
Turkey , known officially as the Republic of Turkey , is a Eurasian country located in Western Asia and in East Thrace in Southeastern Europe...
-German
Germany
Germany , officially the Federal Republic of Germany , is a federal parliamentary republic in Europe. The country consists of 16 states while the capital and largest city is Berlin. Germany covers an area of 357,021 km2 and has a largely temperate seasonal climate...
footballer. He was considered one of the hottest prospects in Germany during the late 1990s.

Giovanni Trapattoni
Giovanni Trapattoni
Giovanni Trapattoni , sometimes known as "Trap" or "Il Trap", is an Italian football coach and former player, considered the most successful club coach in the history of Serie A. As a player he was part of Italy's squad at the 1962 FIFA World Cup....
called him up to train with Bayern's senior squad when he was 16 years old, while Ottmar Hitzfeld
Ottmar Hitzfeld
Ottmar Hitzfeld is a German former football player and manager, nicknamed der General ....
granted him his professional debut at age 17. He replaced Hasan Salihamidžić
Hasan Salihamidžic
Hasan Salihamidžić is a Bosnian football midfielder currently playing for VfL Wolfsburg in the Bundesliga.-Early life:His father Ahmed and mother Šefika gave him the nickname "Braco" meaning "little brother" in Bosnian since Hasan has an older sister, hence his current nickname "Brazzo". He...
in a 1998–99 UEFA Champions League
UEFA Champions League
The UEFA Champions League, known simply the Champions League and originally known as the European Champion Clubs' Cup or European Cup, is an annual international club football competition organised by the Union of European Football Associations since 1955 for the top football clubs in Europe. It...
game against Manchester United with 30 minutes left when the score was 2–1 for Manchester. Bayern ended up tying the game.

In September 2006, Göktan joined TSV 1860 München
TSV 1860 München
Turn- und Sportverein München von 1860, commonly known as TSV 1860 München or 1860 Munich, is a German sports club based in Munich, Bavaria. The club's football team plays in the Second Bundesliga, after relegation from the Bundesliga following the 2003–04 season...
in the Bundesliga and beaome a star of the team. On 21 October 2008, he was released from his contract after being positively tested for Cocaine
Cocaine
Cocaine is a crystalline tropane alkaloid that is obtained from the leaves of the coca plant. The name comes from "coca" in addition to the alkaloid suffix -ine, forming cocaine. It is a stimulant of the central nervous system, an appetite suppressant, and a topical anesthetic...
consumption.

On 21 January 2010, he has signed a one-year contact with Thai Premier League champions Muangthong United who were hoping to qualify for their first ever AFC Champions League
AFC Champions League
The AFC Champions League is the premier Asian club football competition hosted annually by Asian Football Confederation . The tournament is contested among the top thirty-two clubs from the top 10 Asian leagues, two of which must qualify through the playoffs...
. Göktan was the club’s first signing under new coach René Desaeyere
René Desaeyere
René Desaeyere is a Belgian former football player and former manager of Muangthong United.-Career:Desaeyere played for Beerschot, Daring Club Bruxelles, Royal Antwerp, R.W.D...
. He left the club without featuring in a single match because of fitness.