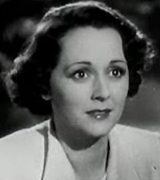 Encyclopedia
Benita Hume was an English film actress. She appeared in 44 films between 1925 and 1955.

She was married to actor Ronald Colman
Ronald Colman
Ronald Charles Colman was an English actor.-Early years:He was born in Richmond, Surrey, England, the second son and fourth child of Charles Colman and his wife Marjory Read Fraser. His siblings included Eric, Edith, and Marjorie. He was educated at boarding school in Littlehampton, where he...
from 1938 to his death in 1958; they were the parents of a daughter, Juliet. She starred with Colman in both versions of the situation comedy
Situation comedy
A situation comedy, often shortened to sitcom, is a genre of comedy that features characters sharing the same common environment, such as a home or workplace, accompanied with jokes as part of the dialogue...
The Halls of Ivy
The Halls of Ivy
The Halls of Ivy is an NBC radio sitcom that ran from 1950-1952. It was created by Fibber McGee & Molly co-creator/writer Don Quinn before being adapted into a CBS television comedy produced by ITC Entertainment and Television Programs of America...
, an NBC Radio program (1949–1952) and a CBS Television show (1954–1955). She also made occasional guest appearances with her husband on The Jack Benny Show on radio, where the Colmans were portrayed as Benny's long-suffering next-door neighbors. She was also married to actor George Sanders
George Sanders
George Sanders was a British actor.George Sanders may also refer to:*George Sanders , Victoria Cross recipient in World War I...
from 1959 to her death in 1967. She died in Egerton, Kent
Egerton, Kent
Egerton is a village and civil parish in the Ashford District of Kent, England. The village is located on the Greensand Ridge 9 miles north of Ashford. The parish is a scattered rural one; the settlement of Stonebridge Green, adjacent to Egerton, is also in the parish.The 13th century parish...
, England
England
England is a country that is part of the United Kingdom. It shares land borders with Scotland to the north and Wales to the west; the Irish Sea is to the north west, the Celtic Sea to the south west, with the North Sea to the east and the English Channel to the south separating it from continental...
from bone cancer at age 61.