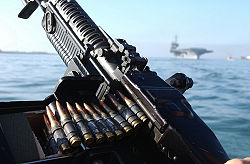 A belt or ammunition belt is a device used to retain and feed cartridges
Cartridge (firearms)
A cartridge, also called a round, packages the bullet, gunpowder and primer into a single metallic case precisely made to fit the firing chamber of a firearm. The primer is a small charge of impact-sensitive chemical that may be located at the center of the case head or at its rim . Electrically...
into a firearm. Belts and the associated feed systems are typically employed to feed machine gun
Machine gun
A machine gun is a fully automatic mounted or portable firearm, usually designed to fire rounds in quick succession from an ammunition belt or large-capacity magazine, typically at a rate of several hundred rounds per minute....
s or other automatic weapons. Belt-fed systems minimize the proportional weight of the ammunition to the feeding device along with allowing high rates of continuous fire.

Belts were originally composed of canvas or cloth with pockets spaced evenly to allow the belt to be mechanically fed into the gun. These designs were prone to malfunctions
Firearm malfunction
A firearm malfunction is the partial or complete failure of a firearm to operate as intended. Malfunctions range from temporary and relatively safe situations, such as a casing that didn't eject, to potentially dangerous occurrences that may permanently damage the gun and cause injury or death...
due to the effects of oil and other contaminants altering the belt. Later belt designs used permanently connected metal links to retain the cartridges during feeding. These belts were more tolerant to exposure to solvents and oil. Many weapons designed to use non-disintegrating or canvas belts are provided with machines to automatically reload these belts with loose rounds or rounds held in stripper clip
Stripper clip
A stripper clip or charger is a speedloader that holds several cartridges together in a single unit for easier loading of a firearm's magazine. A stripper clip is used only for loading the magazine and is not necessary for the firearm to function...
s. In use during World War I
World War I
World War I , which was predominantly called the World War or the Great War from its occurrence until 1939, and the First World War or World War I thereafter, was a major war centred in Europe that began on 28 July 1914 and lasted until 11 November 1918...
, reloaders allowed ammunition belts to be recycled quickly to allow practically continuous fire.

Modern infantry machine guns often have feed systems allowing the use of linked ammunition or other forms of feed like magazines or drums. In some instances—like the FN
Fabrique Nationale de Herstal
Fabrique Nationale d'Herstal — self identified as FN Herstal and often referred to as Fabrique Nationale or simply FN — is a firearms manufacturer located in Herstal, Belgium....
MINIMI
FN Minimi
The Minimi is a Belgian 5.56mm light machine gun developed by Fabrique Nationale in Herstal by Ernest Vervier. First introduced in 1974, it has entered service with the armed forces of over thirty countries...
/M249 SAW and the IMI Negev
IMI Negev
The Negev is an Israeli 5.56 mm light machine gun, developed by Israel Military Industries Ltd. of Ramat HaSharon , as a replacement for the 5.56 mm Galil ARM light machine gun, whose barrel would overheat easily during sustained fire...
—the feed system requires no modification to fire with either mechanism. Other designs—like the Heckler and Koch HK21-based designs or MG34—require the exchange of modular parts to allow belt or alternate feeding. Due to the lack of protection provided by the belt, belt-fed infantry weapons typically use a flexible or rigid container to retain the belt on the weapon. In some designs—like the MG3—the belt container appears to be a magazine causing some confusion to people unfamiliar with the design. The capacity of belts and carriers is typically a function of weight and bulk. Their size is limited by caliber and the portability of the combined weapon and ammunition. The most common sizes typically carried on a man-portable weapon run from 50 to 300 rounds.

Found on mostly early machine guns. Two-stage cartridge feed system (cartridge withdrawn from the belt to the rear, and then pushed forward into the barrel). Examples are the Darne mle 1922 and Vickers
Vickers machine gun
Not to be confused with the Vickers light machine gunThe Vickers machine gun or Vickers gun is a name primarily used to refer to the water-cooled .303 inch machine gun produced by Vickers Limited, originally for the British Army...

Some weapons—such as the M134 Minigun and related design—use a hybrid mechanism to strip rounds from disintegrating belts into a linkless feed system or a specialized delinker to allow for more reliable feeding at extreme rates of fire.