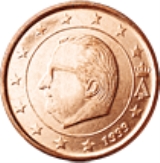 Encyclopedia
Belgian euro coins feature only a single design for all eight coins: the portrait or effigy
Effigy
An effigy is a representation of a person, especially in the form of sculpture or some other three-dimensional form.The term is usually associated with full-length figures of a deceased person depicted in stone or wood on church monuments. These most often lie supine with hands together in prayer,...
of King Albert II
Albert II of Belgium
Albert II is the current reigning King of the Belgians, a constitutional monarch. He is a member of the royal house "of Belgium"; formerly this house was named Saxe-Coburg-Gotha...
of the Belgians and his royal monogram
Monogram
A monogram is a motif made by overlapping or combining two or more letters or other graphemes to form one symbol. Monograms are often made by combining the initials of an individual or a company, used as recognizable symbols or logos. A series of uncombined initials is properly referred to as a...
. Also part of the design by Jan Alfons Keustermans are the 12 stars of the EU
European symbols
A number of symbols of Europe have emerged throughout history. Depending on the symbol, they can apply to Europe as a whole, European unity or merely to the European Union...
and the year of imprint.

For images of the common side and a detailed description of the coins, see euro coins
Euro coins
There are eight euro coin denominations, ranging from one cent to two euros . The coins first came into use in 2002. They have a common reverse, portraying a map of Europe, but each country in the eurozone has its own design on the obverse, which means that each coin has a variety of different...
.

In Belgium, the euro was introduced in 2002. However, the first sets of coins were minted, as preparation, in 1999. Hence the first euro coins of Belgium have minted the year 1999 instead of 2002.

In order to conform to the common guidelines on the design of national faces of coins, Belgium
Belgium
Belgium , officially the Kingdom of Belgium, is a federal state in Western Europe. It is a founding member of the European Union and hosts the EU's headquarters, and those of several other major international organisations such as NATO.Belgium is also a member of, or affiliated to, many...
has updated the design of the Belgian national face of euro coins to be produced from 2008. Coins from previous years featuring the old Belgian national face will remain valid.

Belgium is the second state in the EMU, after Finland
Finnish euro coins
Finnish euro coins feature three separate designs. Heikki Häiväoja provided the design for the 1 cent – 50 cent coins, Pertti Mäkinen provided the design for the 1 euro coin, and Raimo Heino provided the design for the 2 euro coin, which shows cloudberry, the golden berry of northern Finland...
, to, from 2008 on, change the design of their standard circulation euro coins in accordance with recommendations defined by the Economic and Financial Affairs Council of the European Union
Economic and Financial Affairs Council
The Economic and Financial Affairs Council is one of the oldest configurations of the Council of the European Union and is composed of the Economics and Finance Ministers of the 27 European Union member states, as well as Budget Ministers when budgetary issues are discussed.ECOFIN often works with...
.
The 2008 portrait did not comply with previous decisions by the ECOFIN in 2005 and 2008. Therefore, an amendment was made, which reverted to the portrait of Albert II
Albert II of Belgium
Albert II is the current reigning King of the Belgians, a constitutional monarch. He is a member of the royal house "of Belgium"; formerly this house was named Saxe-Coburg-Gotha...
found in the 2007 series. Mint marks, year and stars remain the same. Some collectors consider this as a third series but since unlike all series it was not published in the official journal of the European Union, it is actually an amendment and not a new series.

The following table shows the mintage quantity for all Belgian euro coins, per denomination, per year (the numbers are represented in millions).

Each year the Royal Belgian Mint issues a limited edition of its Euro coins in proof quality.

Belgium has a good collection of euro commemorative coins, solely in silver
Silver
Silver is a metallic chemical element with the chemical symbol Ag and atomic number 47. A soft, white, lustrous transition metal, it has the highest electrical conductivity of any element and the highest thermal conductivity of any metal...
and gold
Gold
Gold is a chemical element with the symbol Au and an atomic number of 79. Gold is a dense, soft, shiny, malleable and ductile metal. Pure gold has a bright yellow color and luster traditionally considered attractive, which it maintains without oxidizing in air or water. Chemically, gold is a...
. Their face value range from 10 euro to 100 euro. This is mainly done as a legacy of old national practice of minting gold and silver coins. These coins are not really intended to be used as means of payment, so generally they do not circulate. Here you can find some samples: