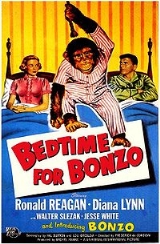 This movie is one of the most remembered of Reagan's acting career, although it was Reagan's least favorite; he never even saw the film until 1984.

The film was later referenced in connection with Reagan in the 1986 Ramones
Ramones
The Ramones were an American rock band that formed in the New York City neighborhood of Forest Hills, Queens, in 1974. They are often cited as the first punk rock group...
song "My Brain Is Hanging Upside Down (Bonzo Goes to Bitburg)
My Brain is Hanging Upside Down (Bonzo Goes to Bitburg)
"Bonzo Goes to Bitburg" is a song by American punk rock band the Ramones. Initially issued as a single in Great Britain by Beggars Banquet Records in 1985, it did not receive an American single release. An emotionally charged protest of the visit by U.S. president Ronald Reagan to a German cemetery...
", and in a track on a 1984 Jerry Harrison
Jerry Harrison
Jerry Harrison is an American songwriter, musician and producer...
record, sampling Reagan and credited to "Bonzo goes to Washington
Five Minutes (Bonzo Goes to Washington song)
"Five Minutes" is a song by Jerry Harrison, Bootsy Collins and producer Daniel Lazerus, and credited to Bonzo Goes to Washington. It was released on the Sleeping Bag Records label in 1984....
". An anti-Reagan song entitled "Bad Time for Bonzo" is featured on The Damned's fourth studio album, Strawberries
Strawberries (album)
Strawberries is the fifth album by The Damned, released in October 1982 on Bronze Records.Limited editions included a strawberry scented lyric insert...
. It was also referenced in a Calvin and Hobbes
Calvin and Hobbes
Calvin and Hobbes is a syndicated daily comic strip that was written and illustrated by American cartoonist Bill Watterson, and syndicated from November 18, 1985, to December 31, 1995. It follows the humorous antics of Calvin, a precocious and adventurous six-year-old boy, and Hobbes, his...
comic strip, and the 1966 Stan Freberg
Stan Freberg
Stanley Victor "Stan" Freberg is an American author, recording artist, animation voice actor, comedian, radio personality, puppeteer, and advertising creative director whose career began in 1944...
comedy album Freberg Underground.