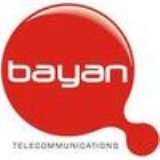 BayanTel is also a provider of data and communications services such as dedicated domestic and international leased lines, frame relay services, Internet access, and other managed data services like Digital Subscriber Lines (DSL).

BayanTel, was the operating arm of BTHC and formerly known as International Communications Corporation, it was incorporated on April 18, 1961.

BayanTel has 83% capacity interest in the NDTN project. The NDTN is the only major alternative telecommunications backbone in the Philippines
Philippines
The Philippines , officially known as the Republic of the Philippines , is a country in Southeast Asia in the western Pacific Ocean. To its north across the Luzon Strait lies Taiwan. West across the South China Sea sits Vietnam...
, while the other being was operated by PLDT. the network also includes RCPI's existing Synchronous Digital Hierarchy (SDH) microwave network with spur links that also extends from Luzon to Mindanao. Both BayanTel and RCPI's networks are linked together to form a seamless and redundant system.

BTHC is 85.4 owned by the Lopez Group and Benpres, a publicly-listed holding company owning the Lopez Group’s investments in communications, power, infrastructure and real estate, among others. BTHC’s other main shareholder is the AIF. AIF is advised by AIFML which oversees approximately US$1 billion in private equity funds focused on Asia with 46% investment in telecoms. Major investors of AIF include Frank Russell Company of the US, the International Finance Corporation of the World Bank and the Asian Development Bank.

The principal companies under BTHC are BTI (98% owned) and Marifil Holdings Corporation (100% owned ) which in turn owns 47% of Extelcom and Nagatel (91.5% owned).

Extelcom, through the granting of a PA in 1988 and a CPCN in 1993, operates as an analogue cellular service provider in Metro Manila and selected urban centers in the provinces, from northern Luzon to as far south as Visayas and Mindanao.

BTHC purchased its initial interest in Extelcom for approximately US$140.0 million in 1996. It then infused PhP765.5 million as part of a capital-raising exercise undertaken by Extelcom in 1997. No further investments or advances have been made by BTHC since. In 30 June 1999, BTHC decided to write-off its investment in Extelcom in recognition of its share in losses incurred by the latter.
-