Encyclopedia
The BayArena is a football
Football (soccer)
Association football, more commonly known as football or soccer, is a sport played between two teams of eleven players with a spherical ball...
stadium
Stadium
A modern stadium is a place or venue for outdoor sports, concerts, or other events and consists of a field or stage either partly or completely surrounded by a structure designed to allow spectators to stand or sit and view the event.)Pausanias noted that for about half a century the only event...
in Leverkusen
Leverkusen
Leverkusen is a city in North Rhine-Westphalia, Germany on the eastern bank of the Rhine. To the South, Leverkusen borders the city of Cologne and to the North is the state capital Düsseldorf....
, Germany
Germany
Germany , officially the Federal Republic of Germany , is a federal parliamentary republic in Europe. The country consists of 16 states while the capital and largest city is Berlin. Germany covers an area of 357,021 km2 and has a largely temperate seasonal climate...
, which has been the home ground of Bundesliga club Bayer Leverkusen
Bayer Leverkusen
Bayer 04 Leverkusen is a German football club based in Leverkusen, North Rhine-Westphalia. It is the most well-known department of TSV Bayer 04 Leverkusen, a sports club whose members also participate in athletics, gymnastics, basketball and other sports.-Origins and early years:On 27 November...
since 1958. 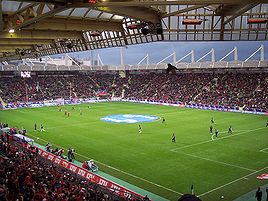 The stadium was originally known as Ulrich-Haberland-Stadion (Ulrich Haberland Stadium), named after a former chairman of Bayer AG
Bayer
Bayer AG is a chemical and pharmaceutical company founded in Barmen , Germany in 1863. It is headquartered in Leverkusen, North Rhine-Westphalia, Germany and well known for its original brand of aspirin.-History:...
, the club's founders. Its original capacity was 20,000. In 1986, a rebuilding project began to convert it into a modern facility; the project continued intermittently over the following decade. The project was completed in 1997, making the stadium an ultramodern all-seater with a capacity of 22,500. The stadium was renamed BayArena in 1998.

In 1999, a hotel attached to the stadium was completed, with some rooms having a view of the pitch. The stadium complex also includes a high-class restaurant, which also overlooks the pitch, and conference facilities.

The city of Leverkusen originally bid to become a venue for the 2006 World Cup, with an expanded BayArena as the site. However, the city, Bayer Leverkusen, and the German organizing committee soon agreed that expanding BayArena to the FIFA
FIFA
The Fédération Internationale de Football Association , commonly known by the acronym FIFA , is the international governing body of :association football, futsal and beach football. Its headquarters are located in Zurich, Switzerland, and its president is Sepp Blatter, who is in his fourth...
-mandated minimum 40,000 capacity for World Cup matches would not be practical, and the city withdrew its bid. Instead, it was agreed that BayArena would be the main training facility for the German national team
Germany national football team
The Germany national football team is the football team that has represented Germany in international competition since 1908. It is governed by the German Football Association , which was founded in 1900....
during the 2006 finals. Jürgen Klinsmann
Jürgen Klinsmann
Jürgen Klinsmann is a German football manager and former player who is currently the coach of the United States Men's National Team. As a player, Klinsmann played for several prominent clubs in Europe and was part of the West German team that won the 1990 FIFA World Cup and the German one that...
, former national coach, however decided against Leverkusen and opted for Berlin as the main training facility. BayArena will supposedly host two national matches as compensation, which were never played.

On March 30, 2007 Bayer AG agreed on the extension of the stadium to a capacity of over 30,000. Construction works began end of 2007 and are supposed to be finished at the beginning of the 2009–10 season.
On September 30, 2008, BayArena was selected as one of nine venues to be used during the 2011 FIFA Women's World Cup to house three group and one quarterfinal match.

As the new stadium design was planned in the 80s, it was based on the design of the Rewirpowerstadium in Bochum. A steep single-tier football stadium without a running track with seating for 35,000 spectators. The stadium was intended to be constructed section by section over time in order to save costs and grow with the demands of the club. In the middle of the rebuild, the demands of modern football stadiums changed. Suites and VIP Areas became necessary, a family friendly section as well as design modification to all-seater following the Bundesliga riots of the 1990s. The south section was built as box suites, making the stadium unique in the Bundesliga with its South American style horseshoe design.