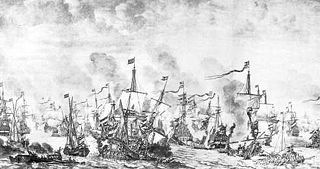 The naval Battle of the Sound took place on 8 November 1658 (29 October O.S.) during the Second Northern War
Second Northern War
The Second Northern War was fought between Sweden and its adversaries the Polish–Lithuanian Commonwealth , Russia , Brandenburg-Prussia , the Habsburg Monarchy and Denmark–Norway...
, near the Sound or Oresund
Oresund
The Sound , is the strait that separates the Danish island Zealand from the southern Swedish province of Scania. Its width is just at the narrowest point between Helsingør, Denmark, and Helsingborg, Sweden...
, just north of the Danish capital, Copenhagen
Copenhagen
Copenhagen is the capital and largest city of Denmark, with an urban population of 1,199,224 and a metropolitan population of 1,930,260 . With the completion of the transnational Øresund Bridge in 2000, Copenhagen has become the centre of the increasingly integrating Øresund Region...
. Sweden had defeated Denmark and an army under Charles X of Sweden
Charles X Gustav of Sweden
Charles X Gustav also Carl Gustav, was King of Sweden from 1654 until his death. He was the son of John Casimir, Count Palatine of Zweibrücken-Kleeburg and Catherine of Sweden. After his father's death he also succeeded him as Pfalzgraf. He was married to Hedwig Eleonora of Holstein-Gottorp, who...
had Copenhagen itself under siege. The Dutch fleet was sent to prevent Sweden from gaining control of both sides of the Sound and controlling Baltic trade.

The Dutch, under the command of Lieutenant-Admiral Jacob van Wassenaer Obdam
Jacob van Wassenaer Obdam
Jacob, Banner Lord of Wassenaer, Lord Obdam, Hensbroek, Spanbroek, Opmeer, Zuidwijk and Kernhem was a Dutch Lieutenant-Admiral, and supreme commander of the confederate Dutch navy. The name Obdam was then also spelled as Opdam...
with Egbert Bartholomeusz Kortenaer
Egbert Bartholomeusz Kortenaer
Egbert Bartholomeuszoon Kortenaer or Egbert Meussen Cortenaer was an admiral of the United Provinces of the Netherlands. His second name is also given as Bartolomeuszoon or Meeuwiszoon. All of these are variations on the patronym "Son of Bartholomew".Kortenaer was born in 1604 in Groningen of...
as his flag captain
Flag captain
In the Royal Navy, a flag captain was the captain of an admiral's flagship. During the 18th and 19th centuries, this ship might also have a "captain of the fleet", who would be ranked between the admiral and the "flag captain" as the ship's "First Captain", with the "flag captain" as the ship's...
, who had sailed to the Baltic
Baltic Sea
The Baltic Sea is a brackish mediterranean sea located in Northern Europe, from 53°N to 66°N latitude and from 20°E to 26°E longitude. It is bounded by the Scandinavian Peninsula, the mainland of Europe, and the Danish islands. It drains into the Kattegat by way of the Øresund, the Great Belt and...
in support of Denmark, had 41 ships with 1413 guns while the Swedes had 45 ships with 1838 guns, arranged in groups of three within each Division. The seven Danish ships with about 280 guns were unable to assist their Dutch allies because of adverse northern winds and could only watch. Obdam, who first received very complicated written instructions from Grand Pensionary
Grand Pensionary
The Grand Pensionary was the most important Dutch official during the time of the United Provinces. In theory he was only a civil servant of the Estates of the dominant province among the Seven United Provinces: the county of Holland...
Johan de Witt
Johan de Witt
Johan de Witt, heer van Zuid- en Noord-Linschoten, Snelrewaard, Hekendorp and IJsselveere was a key figure in Dutch politics in the mid 17th century, when its flourishing sea trade in a period of globalization made the United Provinces a leading European power during the Dutch Golden Age...
and asked his boss to explain them again "in three words", summed up his mission in a single sentence: "Save Copenhagen and punch anyone in the face who tries to prevent it". That "anyone" was the English fleet; the British didn't intervene however. The Swedes aggressively attacked, but failed as the approaching Dutch had the weather gage
Weather gage
The weather gage is a nautical term used to describe the advantageous position of a fighting sailing vessel, relative to another. The term is from the Age of Sail, and is now antiquated. A ship is said to possess the weather gage if it is in any position, at sea, upwind of the other vessel...
. The Dutch forced the Swedish fleet to end the blockade of the Danish capital, which eventually forced Charles to abandon the siege entirely.