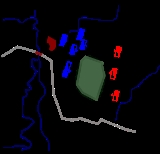 Encyclopedia
The Battle of Civitate was fought on 18 June 1053 in Southern Italy, between the Normans, led by the Count of Apulia
Apulia
Apulia is a region in Southern Italy bordering the Adriatic Sea in the east, the Ionian Sea to the southeast, and the Strait of Òtranto and Gulf of Taranto in the south. Its most southern portion, known as Salento peninsula, forms a high heel on the "boot" of Italy. The region comprises , and...
Humphrey of Hauteville
Humphrey of Hauteville
Humphrey of Hauteville , surnamed Abagelard, was the Count of Apulia and Calabria from 1051 to his death.Humphrey was probably the youngest son of Tancred of Hauteville by his first wife Muriel. Some sources make Geoffrey and Serlo his younger brothers...
, and a Swabia
Swabia
Swabia is a cultural, historic and linguistic region in southwestern Germany.-Geography:Like many cultural regions of Europe, Swabia's borders are not clearly defined...
n-Italian-Lombard
Lombards
The Lombards , also referred to as Longobards, were a Germanic tribe of Scandinavian origin, who from 568 to 774 ruled a Kingdom in Italy...
army, organised by Pope Leo IX
Pope Leo IX
Pope Saint Leo IX , born Bruno of Eguisheim-Dagsburg, was Pope from February 12, 1049 to his death. He was a German aristocrat and as well as being Pope was a powerful secular ruler of central Italy. He is regarded as a saint by the Roman Catholic Church, with the feast day of April 19...
and led on the battlefield by Gerard, Duke of Lorraine
Gerard, Duke of Lorraine
Gerard IV, Duke of Alsace was the count of Metz and Chatenois from 1047/1048, when his brother Duke Adalbert resigned them to him on becoming the Duke of Upper Lorraine. On Adalbert's death the next year, Gerard became duke and was so until his death...
, and Rudolf
Rudolf of Benevento
Rudolf was the papal rector of the Duchy of Benevento under Pope Leo IX from 1053 to 1054....
, Prince of Benevento
Benevento
Benevento is a town and comune of Campania, Italy, capital of the province of Benevento, 50 km northeast of Naples. It is situated on a hill 130 m above sea-level at the confluence of the Calore Irpino and Sabato...
. The Norman victory over the allied army marked the start of a conflict that ended with the recognition of the Norman conquest in South Italy.


The arrival of the Normans in Southern Italy

The Normans had arrived in Italy in 1017, in a pilgrimage to the sanctuary of St. Michael Archangel
Michael (archangel)
Michael , Micha'el or Mîkhā'ēl; , Mikhaḗl; or Míchaël; , Mīkhā'īl) is an archangel in Jewish, Christian, and Islamic teachings. Roman Catholics, Anglicans, and Lutherans refer to him as Saint Michael the Archangel and also simply as Saint Michael...
in Monte Sant'Angelo sul Gargano (Apulia).
These warriors had been used to counter the threat posed by the Saracens, who, from their bases in Sicily, raided South Italy without much resistance from the Lombard and Byzantine rulers of the affected lands.

The availability of this mercenary force (the Normans were famous for being militariter lucrum quaerens, "looking for their payback with the military service") could not escape the Christian rulers of South Italy, who employed the Normans in their internal wars. And the Normans looked for their own payback in these turmoils: in 1030, Rainulf Drengot obtained the County of Aversa
Aversa
Aversa is a town and comune in the Province of Caserta in Campania southern Italy, about 15 kilometres north of Naples. It is the centre of an agricultural district, the agro aversano, producing wine and cheese...
.

The Norman advances in southern Italy had alarmed the Pope. In 1052, Leo met Henry III, Holy Roman Emperor
Henry III, Holy Roman Emperor
Henry III , called the Black or the Pious, was a member of the Salian Dynasty of Holy Roman Emperors...
and his relative, in Saxony
Saxony
The Free State of Saxony is a landlocked state of Germany, contingent with Brandenburg, Saxony Anhalt, Thuringia, Bavaria, the Czech Republic and Poland. It is the tenth-largest German state in area, with of Germany's sixteen states....
, and asked for aid in curbing the Normans. Aid was refused and Leo returned to Rome in March 1053 with only 700 Swabia
Swabia
Swabia is a cultural, historic and linguistic region in southwestern Germany.-Geography:Like many cultural regions of Europe, Swabia's borders are not clearly defined...
n infantry.

But there were others worried about the Norman power, in particular the Italian and Lombard rulers in the south. The Prince of Benevento
Benevento
Benevento is a town and comune of Campania, Italy, capital of the province of Benevento, 50 km northeast of Naples. It is situated on a hill 130 m above sea-level at the confluence of the Calore Irpino and Sabato...
, Rudolf, the Duke of Gaeta
Gaeta
Gaeta is a city and comune in the province of Latina, in Lazio, central Italy. Set on a promontory stretching towards the Gulf of Gaeta, it is 120 km from Rome and 80 km from Naples....
, the Counts of Aquino
Aquino
Aquino is a town and comune in the province of Frosinone, in the Lazio region of Italy, 12 km northwest of Cassino.-History:The ancient Aquinum was a municipium in the time of Cicero, and made a colony by the Triumviri...
and Teano
Teano
Teano is a town and comune of Campania, Italy, in the province of Caserta, 30 km north-west of that town on the main line to Rome from Naples. It stands at the south-east foot of an extinct volcano, Rocca Monfina.- Ancient times and Middle Ages:...
, the Archbishop and the citizens of Amalfi
Amalfi
Amalfi is a town and comune in the province of Salerno, in the region of Campania, Italy, on the Gulf of Salerno, c. 35 km southeast of Naples. It lies at the mouth of a deep ravine, at the foot of Monte Cerreto , surrounded by dramatic cliffs and coastal scenery...
—together with men from Apulia, Molise, Campania, Abruzzo and Latium—answered the call of the Pope, and formed a coalition that moved against the Normans.

The Pope had also another friendly power, the Byzantine Empire
Byzantine Empire
The Byzantine Empire was the Eastern Roman Empire during the periods of Late Antiquity and the Middle Ages, centred on the capital of Constantinople. Known simply as the Roman Empire or Romania to its inhabitants and neighbours, the Empire was the direct continuation of the Ancient Roman State...
ruled by Constantine IX. At first, the Byzantines, established in Apulia, had tried to buy off the Normans and press them into service within their own largely mercenary army; since the Normans were famous for their avarice
Greed
Greed is an excessive desire to possess wealth, goods, or abstract things of value with the intention to keep it for one's self. Greed is inappropriate expectation...
. So, the Byzantine commander, the Lombard Catepan of Italy Argyrus, offered money to disperse as mercenaries to the Eastern frontiers of the Empire, but the Normans rejected the proposal, explicitly stating that their aim was the conquest of southern Italy. Thus spurned, Argyrus contacted the Pope, and when Leo and his army moved from Rome to Apulia to engage the Normans in battle, a Byzantine army led by Argyrus personally moved from Apulia with the same plan, catching the Normans in a pinch.

The Normans understood the danger and collected all available men and formed a single army under the command of the Count of Apulia, Humphrey of Hauteville
Humphrey of Hauteville
Humphrey of Hauteville , surnamed Abagelard, was the Count of Apulia and Calabria from 1051 to his death.Humphrey was probably the youngest son of Tancred of Hauteville by his first wife Muriel. Some sources make Geoffrey and Serlo his younger brothers...
, the Count Richard of Aversa, and other Hautevilles, amongst which was Robert, later known under the name of Robert Guiscard
Robert Guiscard
Robert d'Hauteville, known as Guiscard, Duke of Apulia and Calabria, from Latin Viscardus and Old French Viscart, often rendered the Resourceful, the Cunning, the Wily, the Fox, or the Weasel was a Norman adventurer conspicuous in the conquest of southern Italy and Sicily...
.

Leo moved to Apulia, and reached the Fortore
Fortore
The Fortore is a river which flows through the provinces of Benevento, Campobasso and Foggia in southern Italy. It has a length of 110 km....
river near the city of Civitate
San Paolo di Civitate
San Paolo di Civitate is a town and comune in the province of Foggia in the Apulia region of southeast Italy.-History:San Paolo was founded in the mid-15th century, mostly as a colony of Albanians...
(or Civitella, northwest of Foggia
Foggia
Foggia is a city and comune of Apulia, Italy, capital of the province of Foggia. Foggia is the main city of a plain called Tavoliere, also known as the "granary of Italy".-History:...
). The Normans went forth to intercept the Papal army near Civitella and prevent its union with the Byzantine army, led by Argyrus. The Normans were short on supplies and had fewer men than their enemies, with no more than 3,000 horsemen and a few infantry against 6,000 horsemen and infantry. They asked for a truce, but before the negotiations ended, they attacked the Papal army.

The two armies were divided by a small hill. The Normans put their horsemen in three formations, with the men of Richard on the right, Humphrey in the center, and Robert Guiscard, with his horsemen and his infantry (the sclavos, the Slavic infantry), on the left. In front of them, the Papal army was divided into two parts, with the Swabian horsemen (able to fight even on foot) on a thin and long line on the right, and the Italians amassed on the left, under the command of Rudolf. Pope Leo was in the city, but his standard, the vexillum sancti Petri, was with his allied army.

The battle started with the attack of the Count of Aversa against the Italians. After moving across the plain, they arrived in front their opponents, who broke formation and fled without even trying to resist; the Normans killed many of them and moved further towards the Papal field-camp.

The Swabians, in the meantime, had moved to the hill, and came into contact with the Norman center, overwhelming it despite a numerical disadvantage. Robert Guiscard, seeing his brother in danger, moved with the left wing to the hill, and succeeded in easing the Swabian pressure, and also displayed his personal bravery.

The situation on the center was balanced. The day was decided by the return of Richard, which resulted in the defeat of the Swabians and of the Papal coalition.

The Pope was taken prisoner by the victorious Normans.

There is some uncertainty over how this happened. Papal sources say that Leo left Civitate and surrendered himself to prevent further bloodshed. Other sources indicate that the inhabitants of Civitate handed over the Pope. He was treated respectfully but was imprisoned at Benevento for almost nine months, and forced to ratify a number of treaties favorable to the Normans.

After six years, and three more anti-Norman Popes, the Treaty of Melfi
Treaty of Melfi
The Treaty of Melfi was signed in August of 1059 between Pope Nicholas II and the Normans. Based on the terms of the accord, the Pope recognized Norman influence over southern Italy. Moreover, the Pope recognized Robert Guiscard as the Duke of Apulia, the Duke of Calabria, and the Count of...
(1059) marked the recognition of the Norman power in South Italy. There were two reasons for this change in Papal politics.

First, the Normans had shown to be a strong (and close by) enemy, while the Emperor a weak (and far away) ally. Second, Pope Nicholas II had decided to cut the bonds between the Roman Church and the Holy Roman Emperors, reclaiming for the Roman cardinals the right to elect the Pope, thus reducing the importance of the Emperor. And in the foreseeable struggle against the Empire, a strong ally was more important than a strong enemy.