What part of France is Basse Normandie

Are there any different languages in basse-normandie
More 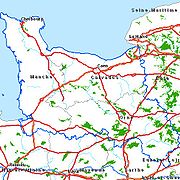 The traditional districts of Lower Normandy include the Cotentin Peninsula
Cotentin Peninsula
The Cotentin Peninsula, also known as the Cherbourg Peninsula, is a peninsula in Normandy, forming part of the north-western coast of France. It juts out north-westwards into the English Channel, towards Great Britain...
and La Hague
La Hague
La Hague is a region on the tip of the Cotentin peninsula in Normandy, France.La Hague is a picturesque place of Precambrian granite cliffs, coves and small fields surrounded by hedges. It faces the Channel Islands and there any many cousins on both side of the Alderney race.The dialect of the...
, the Campagne de Caen
Caen
Caen is a commune in northwestern France. It is the prefecture of the Calvados department and the capital of the Basse-Normandie region. It is located inland from the English Channel....
, the Norman Bocage
Bocage
Bocage is a Norman word which has entered both the French and English languages. It may refer to a small forest, a decorative element of leaves, a terrain of mixed woodland and pasture, or a type of rubble-work, comparable with the English use of 'rustic' in relation to garden...
, the Bessin
Bessin
The Bessin is an area in Normandy, France, corresponding to the territory of the Bajocasse tribe of Gaul who also gave their name to the city of Bayeux, central town of the Bessin.-History:The territory was annexed by the Duchy of Normandy in 924....
and the Avranchin
Avranchin
The Avranchin is an area in Normandy, France, corresponding to the territory of the Abrincates, tribe of Celts who also gave their name to the city of Avranches, main town of the Avranchin....
.

Regions relating to Lower Normandy: Gallia Lugdunensis
Gallia Lugdunensis
Gallia Lugdunensis was a province of the Roman Empire in what is now the modern country of France, part of the Celtic territory of Gaul. It is named after its capital Lugdunum , possibly Roman Europe's major city west of Italy, and a major imperial mint...
, Neustria
Neustria
The territory of Neustria or Neustrasia, meaning "new [western] land", originated in 511, made up of the regions from Aquitaine to the English Channel, approximating most of the north of present-day France, with Paris and Soissons as its main cities...
, and Normandy
Normandy
Normandy is a geographical region corresponding to the former Duchy of Normandy. It is in France.The continental territory covers 30,627 km² and forms the preponderant part of Normandy and roughly 5% of the territory of France. It is divided for administrative purposes into two régions:...
.

The traditional province of Normandy, with an integral history reaching back to the 10th century, was divided in 1957 into two regions: Lower Normandy and Upper Normandy.

During the Roman era, the region was divided into several different city-states. That of Vieux
Vieux, Calvados
-Sights:*The archaeological museum of Vieux la Romaine .*Villa of Bas de Vieux-External links:*...
was excavated in the 17th century, revealing numerous structures and vestiges bearing testimony to the prosperity of the Caen
Caen
Caen is a commune in northwestern France. It is the prefecture of the Calvados department and the capital of the Basse-Normandie region. It is located inland from the English Channel....
region.

The region was conquered by the Franks
Franks
The Franks were a confederation of Germanic tribes first attested in the third century AD as living north and east of the Lower Rhine River. From the third to fifth centuries some Franks raided Roman territory while other Franks joined the Roman troops in Gaul. Only the Salian Franks formed a...
in the 5th century.

In the 9th century, the Norman
Normans
The Normans were the people who gave their name to Normandy, a region in northern France. They were descended from Norse Viking conquerors of the territory and the native population of Frankish and Gallo-Roman stock...
conquests devastated the region. Much of the territory of Lower Normandy was added to the Duchy of Normandy in the 10th century.

In 1066, Duke William I of Normandy
William I of England
William I , also known as William the Conqueror , was the first Norman King of England from Christmas 1066 until his death. He was also Duke of Normandy from 3 July 1035 until his death, under the name William II...
conquered England
England
England is a country that is part of the United Kingdom. It shares land borders with Scotland to the north and Wales to the west; the Irish Sea is to the north west, the Celtic Sea to the south west, with the North Sea to the east and the English Channel to the south separating it from continental...
. He was buried in Caen.

The victory of Tinchebray
Battle of Tinchebray
The Battle of Tinchebray was fought 28 September 1106, in the town of Tinchebray , Normandy, between an invading force led by Henry I of England, and his older brother Robert Curthose, the Duke of Normandy...
in 1106 gave Normandy to the Plantagenets. Nearly one hundred years later, in 1204, King Philip II Augustus of France conquered the region. Then, during the Hundred Years' War
Hundred Years' War
The Hundred Years' War was a series of separate wars waged from 1337 to 1453 by the House of Valois and the House of Plantagenet, also known as the House of Anjou, for the French throne, which had become vacant upon the extinction of the senior Capetian line of French kings...
, it was regained by the Plantagenets. However, the French recovered the region between 1436 and 1450. By 1453, the French monarchy controlled all of France apart from Calais
Calais
Calais is a town in Northern France in the department of Pas-de-Calais, of which it is a sub-prefecture. Although Calais is by far the largest city in Pas-de-Calais, the department's capital is its third-largest city of Arras....
, which remained in English hands.

During the Second World War
World War II
World War II, or the Second World War , was a global conflict lasting from 1939 to 1945, involving most of the world's nations—including all of the great powers—eventually forming two opposing military alliances: the Allies and the Axis...
, the main thrust of Operation Overlord
Operation Overlord
Operation Overlord was the code name for the Battle of Normandy, the operation that launched the invasion of German-occupied western Europe during World War II by Allied forces. The operation commenced on 6 June 1944 with the Normandy landings...
was focussed on Lower Normandy. The beaches of Calvados
Calvados
The French department of Calvados is part of the region of Basse-Normandie in Normandy. It takes its name from a cluster of rocks off the English Channel coast...
were the site of the D-Day
D-Day
D-Day is a term often used in military parlance to denote the day on which a combat attack or operation is to be initiated. "D-Day" often represents a variable, designating the day upon which some significant event will occur or has occurred; see Military designation of days and hours for similar...
landings in June 1944. Lower Normandy suffered badly during the War, with many of its towns and villages being destroyed or badly damaged during the Battle of Normandy.

The region's economy is heavily agricultural, with livestock and dairy farming, textiles and fruit production among its major industries. The region is the leader in France in the sectors of butter, fromage frais, soft cheeses, cider apples, cider, leeks, turnips, and flax. The region also breeds more horses than any other in France. The western part of the region is used mainly for farming, because of the prairies. Iron ore is mined near Caen. Tourism
Tourism
Tourism is travel for recreational, leisure or business purposes. The World Tourism Organization defines tourists as people "traveling to and staying in places outside their usual environment for not more than one consecutive year for leisure, business and other purposes".Tourism has become a...
is also a major industry. The region has direct ferry links to England
England
England is a country that is part of the United Kingdom. It shares land borders with Scotland to the north and Wales to the west; the Irish Sea is to the north west, the Celtic Sea to the south west, with the North Sea to the east and the English Channel to the south separating it from continental...
(via the port of Cherbourg and Caen Ouistreham
Ouistreham
Ouistreham is a commune in the Calvados department' in the Basse-Normandie region in northwestern France.Ouistreham is a small port with fishing boats, leisure craft and a ferry-harbour. It serves as the port of the city of Caen. The town is about the mouth of the Canal de Caen à la...
).

In addition to French
French language
French is a Romance language spoken as a first language in France, the Romandy region in Switzerland, Wallonia and Brussels in Belgium, Monaco, the regions of Quebec and Acadia in Canada, and by various communities elsewhere. Second-language speakers of French are distributed throughout many parts...
, Normandy has its own regional language
Regional language
A regional language is a language spoken in an area of a nation state, whether it be a small area, a federal state or province, or some wider area....
, Norman
Norman language
Norman is a Romance language and one of the Oïl languages. Norman can be classified as one of the northern Oïl languages along with Picard and Walloon...
. It is still in use today in Lower Normandy, with the dialects of the Cotentin more in evidence than others. Lower Normandy has also been the home of many well-known French authors, including Guy de Maupassant
Guy de Maupassant
Henri René Albert Guy de Maupassant was a popular 19th-century French writer, considered one of the fathers of the modern short story and one of the form's finest exponents....
, Marcel Proust
Marcel Proust
Valentin Louis Georges Eugène Marcel Proust was a French novelist, critic, and essayist best known for his monumental À la recherche du temps perdu...
, Jules Barbey d'Aurevilly. Notable Norman language authors connected especially with Lower Normandy include Alfred Rossel, Louis Beuve, and Côtis-Capel
Côtis-Capel
Côtis-Capel was the pen name of Albert Lohier, a Norman language poet. He was from La Hague and wrote in the Haguais dialect of Cotentinais.-Bibliography:* Poetry collections** Rocâles ,...
.

In terms of music, composer Erik Satie
Erik Satie
Éric Alfred Leslie Satie was a French composer and pianist. Satie was a colourful figure in the early 20th century Parisian avant-garde...
also hailed from this region. And in the visual arts, Jean-François Millet
Jean-François Millet
Jean-François Millet was a French painter and one of the founders of the Barbizon school in rural France...
was a native of La Hague. Eugène Boudin
Eugène Boudin
Eugène Boudin was one of the first French landscape painters to paint outdoors.Boudin was a marine painter, and expert in the rendering of all that goes upon the sea and along its shores...
was born in Honfleur and Fernand Léger
Fernand Léger
Joseph Fernand Henri Léger was a French painter, sculptor, and filmmaker. In his early works he created a personal form of Cubism which he gradually modified into a more figurative, populist style...
in Argentan. Important events include Deauville Asian Film Festival
Deauville Asian Film Festival
The Deauville Asian Film Festival takes place annually in Deauville, France since 1999 and focuses on Asian cinema...
and Deauville American Film Festival
Deauville American Film Festival
The Deauville American Film Festival is a yearly film festival devoted to American cinema, taking place since 1975 in Deauville, France. It was established by Lionel Chouchan and André Halimi....
.