In the early twentieth century, the players of Basque fought encounters between Spanish regions in the combined created in 1915 under the name " Team North ", which also included players from Cantabria . In his first encounters won in Madrid by 1-0 and tied to the Catalan one with the locals. In May 1916 , the "Team North" was faced with Barcelona, winning by 1-3 and 5-0. In 1922 teams were separate Basque and Cantabrian by not accepting recent renaming of the Northern Federation of Biscay Federation. In 1930 and 1931 under the name of the Basque, played two games against the Catalan team winning again both by 0-1 in Montjuïc and 3-2 in Bilbao .

In 1937 , during the Spanish Civil War , the first regional president , José Antonio Aguirre , who was player of Athletic Bilbao , organized a call Euzkadi selection in order to raise funds abroad to civil war. The team consisted of the following players:
Goalkeepers: Gregory Blasco (Athletic) and Rafael Egusquiza (Arenas).
Defenders: Serafin Aedo (Betis), Peter Areso (FC Barcelona) and Pablito Boats (Media: Leonardo Cilaurren (Athletic), Jose Muguerza (Athletic), Pedro Regueiro (Madrid), Roberto Echevarria (Athletic), Ángel Zubieta (Athletic), Sabino Aguirre (Nîmes) and Enrique Larrinaga (Racing)
Forwards: Jose Iraragorri (Athletic), Emiline Alonso (Madrid), Isidro Langara (Oviedo), Luis Regueiro (Madrid), Chirri II (no team), Jose Manuel Urquiola (Ath.Madrid), Guillermo Gorostiza (Athletic) As coach, Peter Vallana ; as a masseur, Perico Birichinaga, and as a delegate, Ricardo Irezábal. He made his debut win in the Paris Parc des Princes the French champions, the Racing of Paris , by 0-3 and then the Olympique Marseille by 1-5. The first defeat was 3-2 against Czechoslovakia. Between 1937 and 1938 also played against Lokomotiv (1-5), twice against Olympique de Marseille (2-5 and 3-1), Czechoslovakia (2-1), selection of Silesia (4-5), Lokomotiv (0-5), Dynamo Moscow (0-1), Dinamo Leningrad (2-2), Dynamo Kiev (1-3), Dinamo Tbilisi (0-2), selection of Georgia (1-3), Spartak Moscow (6-2), FC Dinamo Moscow (4-7), Dinamo Minsk (1-6), selection of Norway (1-3), selection of workers in Norway (2-3) and complete the biggest win against the team of Denmark (1-11).After the fall of Bilbao the team crossed the Atlantic to play in Mexico where he won 13 of their 17 games and in Cuba where he won all matches except for one draw against Juventud Asturiana (4-4). He played under the name Club Deportivo Euzkadi Amateur League Federal District, one of the two major leagues in Mexico, 38-39 in the season where other teams participating peninsular tradition as the Real Club Spain and Asturias FC. The site selection indicates Euskadi champion with 13 wins, one draw and three defeats, although the website of the Mexican Football Federation indicates that this year was the Asturias champion. Finished civil war broke up the team as a reward each member receiving 10,000 pesetas. Some of their players were in America and Latin America participated in the competitions.

Until August 16 of 1979 would never play any game because of the dictatorship. The combined this first game played under the name of Euskadi in the San Mames stadium during the Semana Grande , with victory against Ireland (4-1) and expressed the government ban the song it sounded Basque (Gernikako Arbola) at the start of the match, which made the Lehendakari Garaikoetxea left the stage, a gesture that was accompanied by the presidents of the provincial councils and the mayors of provincial capitals. Osasuna Athletic Club was the only club with players named in refusing to provide players. Iraragorri Langara and made the kick off and Iribar served as captain. The game was played in one of the cultural events had more impact in the Basque society, as was the campaign of Euskara "Bai Euskarari" organized by Sustraiak.Months after repeated success in San Sebastian in the mythical stadium Atocha against Bulgaria (4-0). In 1980 in Vitoria against Hungary lost 1-5. Since then he has played 20 games with only 3 losses. Other: Tottenham defeats to Cameroon (0-1) and Wales (0-1), victory over Serbia (4-0) and tie at two goals in 2007 against Catalonia at Camp Nou On June 20th of 2007 , after 69 years without playing outside of Spain , Euskadi selection faced of Venezuela in San Cristobal (Venezuela), winning by 3-4. The last game was in full Spanish Civil War, had been against Cuba in Havana on June 20 of 1938. The selection of Euskadi then defeated by a resounding 0-6. 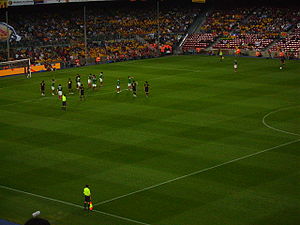 On December 29 of 2007 played a friendly match against the team of Catalonia in San Mames, first under the name of Euskal Herria. The result was Euskal Herria 1 to 1 Catalan The name change driven by the Basque Federation has been rejected by politicians sympathetic to the Basque Nationalist Party, including the very Lehendakari Juan Jose Ibarretxe. For the friendly match scheduled for the Christmas break of the 2008/2009 season , the Basque Football Federation had proposed returning to the team's previous name, "Selection of Euskadi". Many Basque players signed a statement announcing that the call would not go if not to play under the name "Euskal Herria". The controversy went beyond the sports arena and against the manifesto were positioned PNV , PSE - PSOE and PP , in favor of it were EA , IU - EB and ANV. Finally, in 2009 a consensus was reached under the name "Euskal Selekzioa" (which means selection Basque Castilian). However, discrepancies between the federation and players and Esait again led the match scheduled against the selection of Iran not to be played. In 2010 however and although again there was no agreement between players and federation, the players agreed to play the game to be played on December 29th in San Mames , between the Basque Selection and Selection of Venezuela . This party was given the gold insignia of the Basque Football Federation to Joseba Etxeberria, former player of Athletic Club Bilbao , Basque footballer for being the most games played for the team, which made the kick-off.