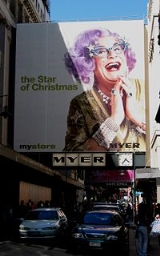 Overview
John Barry Humphries, AO
Order of Australia
The Order of Australia is an order of chivalry established on 14 February 1975 by Elizabeth II, Queen of Australia, "for the purpose of according recognition to Australian citizens and other persons for achievement or for meritorious service"...
, CBE
Order of the British Empire
The Most Excellent Order of the British Empire is an order of chivalry established on 4 June 1917 by George V of the United Kingdom. The Order comprises five classes in civil and military divisions...
(born 17 February 1934) is an Australian comedian, satirist
Satire
Satire is primarily a literary genre or form, although in practice it can also be found in the graphic and performing arts. In satire, vices, follies, abuses, and shortcomings are held up to ridicule, ideally with the intent of shaming individuals, and society itself, into improvement...
, dada
Dada
Dada or Dadaism is a cultural movement that began in Zurich, Switzerland, during World War I and peaked from 1916 to 1922. The movement primarily involved visual arts, literature—poetry, art manifestoes, art theory—theatre, and graphic design, and concentrated its anti-war politics through a...
ist, artist, author and character actor
Character actor
A character actor is one who predominantly plays unusual or eccentric characters. The Oxford English Dictionary defines a character actor as "an actor who specializes in character parts", defining character part in turn as "an acting role displaying pronounced or unusual characteristics or...
, best known for his on-stage and television alter ego
Alter ego
An alter ego is a second self, which is believe to be distinct from a person's normal or original personality. The term was coined in the early nineteenth century when dissociative identity disorder was first described by psychologists...
s Dame Edna Everage
Dame Edna Everage
Dame Edna is a character created and played by Australian dadaist performer and comedian, Barry Humphries, famous for her lilac-coloured or "wisteria hue" hair and cat eye glasses or "face furniture," her favorite flower, the gladiola and her boisterous greeting: "Hello Possums!" As Dame Edna,...
, a Melbourne housewife and "gigastar", and Sir Les Patterson
Sir Les Patterson
Dr Sir Leslie Colin Patterson is a fictional character portrayed by the Australian comedian Barry Humphries. Obese, lecherous and offensive, this farting, belching, nose-picking figure of Rabelaisian excess is an antipodean Falstaff...
, Australia's foul-mouthed cultural attaché
Cultural attaché
A cultural attaché is a diplomat with special responsibility for promoting the culture of his or her homeland. The position has been used as an official cover for intelligence agents. Historically, the post has often been filled by writers and artists, giving them a steady income, allowing them to...
to the Court of St. James's
Court of St. James's
The Court of St James's is the royal court of the United Kingdom. It previously had the same function in the Kingdom of England and in the Kingdom of Great Britain .-Overview:...
. He is a film producer and script writer, a star of London's West End musical theatre, an award-winning writer and an accomplished landscape painter. For his delivery of dadaist and absurdist
Absurdism
In philosophy, "The Absurd" refers to the conflict between the human tendency to seek value and meaning in life and the human inability to find any...
humour to millions, biographer Anne Pender described Humphries in 2010 as not only the most significant theatrical figure of our time … [but] the most significant comedian to emerge since Charlie Chaplin
Charlie Chaplin
Sir Charles Spencer "Charlie" Chaplin, KBE was an English comic actor, film director and composer best known for his work during the silent film era. He became the most famous film star in the world before the end of World War I...
.

Humphries' characters, especially Dame Edna Everage, have brought him international renown, and he has appeared in numerous films, stage productions and television shows.

There is no more terrible fate for a comedian than to be taken seriously. &mdash; My Life as Me: A Memoir (2002)

Although there were many who did the dirty on him in the envious world of letters, Stephen never let any of them live rent-free in his brain. &mdash; My Life as Me: A Memoir

And so I set these things down before the onset of the first of a thousand small physical degradations as, in a still-distant suburb, Death strides whistling towards me. My Life as Me: A Memoir (closing line) "New Zealand is a country of thirty thousand million sheep, three million of whom think they are human. "

Hello possums! (Greeting to her audience)

I was born in Melbourne with a precious gift. Dame Nature stooped over my cot and gave me this gift. It was the ability to laugh at the misfortunes of others.

(to a member of the audience, Back with Vengeance tour, Melbourne, 2006) I'm trying to think of a word to describe your outfit ...affordable.

I'm that low I could parachute out of a snake's arsehole and still have room to free-fall.

Are you with me? (Sir Les's usual comment to the audience after a suggestive remark)