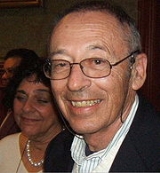 At Columbia
Columbia University
Columbia University in the City of New York is a private, Ivy League university in Manhattan, New York City. Columbia is the oldest institution of higher learning in the state of New York, the fifth oldest in the United States, and one of the country's nine Colonial Colleges founded before the...
he was a student of Paul Lazarsfeld
Paul Lazarsfeld
Paul Felix Lazarsfeld was one of the major figures in 20th-century American sociology. The founder of Columbia University's Bureau of Applied Social Research, he exerted a tremendous influence over the techniques and the organization of social research...
and Robert K. Merton
Robert K. Merton
Robert King Merton was a distinguished American sociologist. He spent most of his career teaching at Columbia University, where he attained the rank of University Professor...
and received a Ph.D.
Ph.D.
A Ph.D. is a Doctor of Philosophy, an academic degree.Ph.D. may also refer to:* Ph.D. , a 1980s British group*Piled Higher and Deeper, a web comic strip*PhD: Phantasy Degree, a Korean comic series* PhD Docbook renderer, an XML renderer...
in 1961. The dissertation was published in the book Organizational Scientists: Their Professional Careers. Post-doc Glaser started a research collaboration with Anselm Strauss
Anselm Strauss
Anselm Leonard Strauss was an American sociologist internationally known as a medical sociologist and as the developer of grounded theory, an innovative method of qualitative analysis widely used in sociology, nursing, education, social work, and...
at the University of California, San Francisco
University of California, San Francisco
The University of California, San Francisco is one of the world's leading centers of health sciences research, patient care, and education. UCSF's medical, pharmacy, dentistry, nursing, and graduate schools are among the top health science professional schools in the world...
. Together they wrote Awareness of Dying
Awareness of Dying
Awareness of Dying is a 1965 book by Barney Glaser and Anselm Strauss.The book was also the first application of grounded theory...
(1965) based on a study of dying in California
California
California is a state located on the West Coast of the United States. It is by far the most populous U.S. state, and the third-largest by land area...
n hospitals. The book was a success. As a response to the many methodological questions on the dying study the first grounded theory
Grounded theory
Grounded theory is a systematic methodology in the social sciences involving the generation of theory from data. It is mainly used in qualitative research, but is also applicable to quantitative data....
(GT) methodology appeared in 1967 co-authored with Strauss: The Discovery of Grounded Theory
The Discovery of Grounded Theory
The Discovery of Grounded Theory is a 1967 book by Barney Glaser and Anselm Strauss on grounded theory.After their success with Awareness of Dying, Glaser and Strauss decided to write a book on methodology. The Discovery of Grounded Theory was meant to invite and motivate people to use the newly...
.

In 1970 Glaser started the publishing company Sociology Press specializing in grounded theory methodologies and readers.
The second grounded theory methodology was written by Glaser in 1978 (Theoretical Sensitivity). Thereafter, Glaser has published several readers of grounded theory and four more methodologies. He has traveled throughout the world giving workshops and seminars to many researchers. In 1998 Glaser received an honorary doctorate from Stockholm University
Stockholm University
Stockholm University is a state university in Stockholm, Sweden. It has over 28,000 students at four faculties, making it one of the largest universities in Scandinavia. The institution is also frequently regarded as one of the top 100 universities in the world...
.

In 1999 Glaser founded the non-profit web based organization Grounded Theory Institute. He owned Cascade Acceptance Corporation, which filed for bankruptcy in November 2009. In July 2010, the bankruptcy trustee declared that the company had been insolvent for at least two years, and the case was converted from a reorganization to a liquidation.