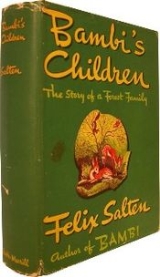 Encyclopedia
Bambi's Children, The Story of a Forest Family, originally titled Bambis Kinder, eine Familie im Walde, is a German
Germany
Germany , officially the Federal Republic of Germany , is a federal parliamentary republic in Europe. The country consists of 16 states while the capital and largest city is Berlin. Germany covers an area of 357,021 km2 and has a largely temperate seasonal climate...
Children's novel
Children's literature
Children's literature is for readers and listeners up to about age twelve; it is often defined in four different ways: books written by children, books written for children, books chosen by children, or books chosen for children. It is often illustrated. The term is used in senses which sometimes...
written by Felix Salten
Felix Salten
Felix Salten was an Austrian author and critic in Vienna. His most famous work is Bambi .-Life:...
as a sequel to his successful work Bambi, A Life in the Woods
Bambi, A Life in the Woods
Bambi, a Life in the Woods, originally published in Austria as Bambi. Eine Lebensgeschichte aus dem Walde, is a 1923 Austrian novel written by Felix Salten and published by Paul Zsolnay Verlag...
. The sequel follows the lives of the deer Bambi's twin fawns as they grow from fawns through adulthood. Salten wrote the sequel while living in exile in Switzerland
Switzerland
Switzerland name of one of the Swiss cantons. ; ; ; or ), in its full name the Swiss Confederation , is a federal republic consisting of 26 cantons, with Bern as the seat of the federal authorities. The country is situated in Western Europe,Or Central Europe depending on the definition....
after being forced to flee Nazi occupied Austria
Austria
Austria , officially the Republic of Austria , is a landlocked country of roughly 8.4 million people in Central Europe. It is bordered by the Czech Republic and Germany to the north, Slovakia and Hungary to the east, Slovenia and Italy to the south, and Switzerland and Liechtenstein to the...
as he was of Jewish heritage. Originally written in German, the novel was first published in English
English language
English is a West Germanic language that arose in the Anglo-Saxon kingdoms of England and spread into what was to become south-east Scotland under the influence of the Anglian medieval kingdom of Northumbria...
in the United States
United States
The United States of America is a federal constitutional republic comprising fifty states and a federal district...
in 1939 by Bobbs-Merrill. It was not published in Germany until the following year. Its language is gentler than that of Bambi, A Life in the Woods.

Twin fawns, Geno and Gurri learn the pleasures as well as downsides of nature and their forest home, as their mother Faline raises them to adulthood. Their father, Bambi, watches over them and, at times, takes care of them while their mother is busy. During their lives, they interact with Lana and Boso, twin fawns of their Aunt Rolla, and the orphaned siblings Nello and Membo. The deer also interact with a variety of humans including hunters seeking to kill them and forest rangers wishing to protect them.