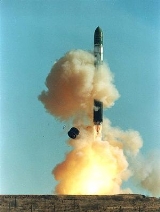 Encyclopedia
Site 109/95 at the Baikonur Cosmodrome
Baikonur Cosmodrome
The Baikonur Cosmodrome , also called Tyuratam, is the world's first and largest operational space launch facility. It is located in the desert steppe of Kazakhstan, about east of the Aral Sea, north of the Syr Darya river, near Tyuratam railway station, at 90 meters above sea level...
is a missile silo built for use by the R-36 missile, which has been converted into a launch site for the Dnepr-1 carrier rocket.

Nineteen R-36 ICBMs were launched on test flights from Site 109 between its activation in 1974, and deactivation in 1983. It was subsequently reactivated for the Dnepr programme, which uses a modified R-36 missile to place satellites into orbit. The Dnepr made its maiden flight from Site 109 on 21 April 1999. The most recent launch from Site 109 was a Dnepr, with the German TanDEM-X
TanDEM-X
TanDEM-X is the name of TerraSAR-X's twin satellite, a German Earth observation satellite using SAR - a modern radar imaging technology. It is a second, almost identical spacecraft to TerraSAR-X...
satellite, which was launched on 21 June 2010.
The source of this article is wikipedia, the free encyclopedia.  The text of this article is licensed under the GFDL.