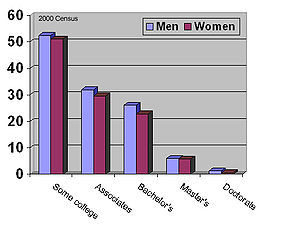 The term is sometimes used as a synonym for "college graduate" as it includes not only those with a bachelor's degree but all others who have completed a degree requiring more than four years of credits. While the term is sometimes used interchangeably with the term college graduate, it excludes those with an associate's degree, as this college degree only requires two years' worth of units and is thus lower than bachelor's degree.