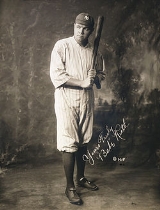 Overview
George Herman Ruth, Jr. (February 6, 1895 – August 16, 1948), best known as "Babe" Ruth and nicknamed "the Bambino" and "the Sultan of Swat", was an American Major League
Major League Baseball
Major League Baseball is the highest level of professional baseball in the United States and Canada, consisting of teams that play in the National League and the American League...
baseball
Baseball
Baseball is a bat-and-ball sport played between two teams of nine players each. The aim is to score runs by hitting a thrown ball with a bat and touching a series of four bases arranged at the corners of a ninety-foot diamond...
player from 1914–1935. Ruth originally broke into the major leagues with the Boston Red Sox
Boston Red Sox
The Boston Red Sox are a professional baseball team based in Boston, Massachusetts, and a member of Major League Baseball’s American League Eastern Division. Founded in as one of the American League's eight charter franchises, the Red Sox's home ballpark has been Fenway Park since . The "Red Sox"...
as a starting pitcher
Starting pitcher
In baseball or softball, a starting pitcher is the pitcher who delivers the first pitch to the first batter of a game. A pitcher who enters the game after the first pitch of the game is a relief pitcher....
, but after he was sold to the New York Yankees
New York Yankees
The New York Yankees are a professional baseball team based in the The Bronx, New York. They compete in Major League Baseball in the American League's East Division...
in 1919, he converted to a full-time right fielder
Right fielder
A right fielder, abbreviated RF, is the outfielder in baseball or softball who plays defense in right field. Right field is the area of the outfield to the right of a person standing at home plate and facing towards the pitcher's mound...
and subsequently became one of the league's most prolific hitters.

How many stolen bases di babe ruth have.
More

A man who knows he's making money for other people ought to get some of the profits he brings in. Don't make any difference if it's baseball or a bank or a vaudeville show. Its business, I tell you. There ain't no sentiment to it. Forget that stuff.

On his temper flaring on 25 May 1922, where he threw dirt at an umpire and chased after a heckler in the stands, as quoted in The Rivals: The Boston Red Sox Vs. the New York Yankees; An Inside History (2004) by Dan Shaughnessy, p. 41

What the hell has Hoover got to do with it? Besides, I had a better year than he did.

Anecdote of his response on being asked how he felt holding out for a salary higher than that of the US President, (variously reported as having been in 1929 or 1930) as quoted in Baseball: A History of America's Game (2002) by Benjamin G. Rader, p. 134

Yes, he's a prick, but he sure can hit. God Almighty, that man can hit!

About Ty Cobb, a notoriously vicious player. Quoted in The Sporting News (12 July 1950); as actually published in The Sporting News, "prick" was replaced by "[censored]" — elsewhere, including Field of Screams: The Dark Underside of America's National Pastime (1994) the quote has appeared as "Ty Cobb is a prick." or sometimes "Cobb is a prick. But he sure can hit. God Almighty, that man can hit."

To my little sick pal. I will try to knock you another homer, maybe two today

His note to a young fan in the hospital, as quoted in Baseball’s Greatest Quotations (1991) by Paul Dickson; sometimes misquoted: "To my sick little pal..."

If it wasn't for baseball, I'd be in either the penitentiary or the cemetery. I have the same violent temper my father and older brother had. Both died of injuries from street fights in Baltimore, fights begun by flare-ups of their tempers.

If I'd just tried for them dinky singles I could've batted around six hundred!

I decided to pick out the greatest hitter to watch and study, and Jackson was good enough for me.