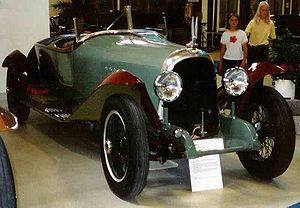 Avions Voisin was a French
France
The French Republic , The French Republic , The French Republic , (commonly known as France , is a unitary semi-presidential republic in Western Europe with several overseas territories and islands located on other continents and in the Indian, Pacific, and Atlantic oceans. Metropolitan France...
luxury automobile
Automobile
An automobile, autocar, motor car or car is a wheeled motor vehicle used for transporting passengers, which also carries its own engine or motor...
brand established by Gabriel Voisin
Gabriel Voisin
Gabriel Voisin was an aviation pioneer and the creator of Europe's first manned, engine-powered, heavier-than-air aircraft capable of a sustained , circular, controlled flight, including take-off and landing. It was flown by Henry Farman on January 13, 1908 near Paris, France...
.

Gabriel B. Voisin was an aviation pioneer and manufacturer who in 1919 started producing cars using Knight
Knight Engine
The Knight Engine was an internal combustion engine, designed by American Charles Yale Knight , that used sleeve valves instead of the more common poppet valve construction.- History :...
-type sleeve valve
Sleeve valve
The sleeve valve is a type of valve mechanism for piston engines, distinct from the usual poppet valve. Sleeve-valve engines saw use in a number of pre-World War II luxury cars and in USA in the Willys-Knight car and light truck...
engines at Issy-les-Moulineaux
Issy-les-Moulineaux
Issy-les-Moulineaux is a commune in the southwestern suburban area of Paris, France. It is located from the centre of Paris. On 1 January 2003, Issy-les-Moulineaux became part of the Communauté d'agglomération Arc de Seine along with the other communes of Chaville, Meudon, Vanves and Ville-d'Avray...
, an industrial suburb to the South West of Paris.
Former student of the Fine Arts School of Lyon
Lyon
Lyon , is a city in east-central France in the Rhône-Alpes region, situated between Paris and Marseille. Lyon is located at from Paris, from Marseille, from Geneva, from Turin, and from Barcelona. The residents of the city are called Lyonnais....
and enthusiast for all things mechanical since his childhood, Voisin's uncompromisingly individual designs made extensive use of light alloys, especially aluminum. One of the company's most striking early designs was the Laboratoire Grand Prix
Grand Prix motor racing
Grand Prix motor racing has its roots in organised automobile racing that began in France as far back as 1894. It quickly evolved from a simple road race from one town to the next, to endurance tests for car and driver...
car of 1923; one of the first cars ever to use monocoque
Monocoque
Monocoque is a construction technique that supports structural load by using an object's external skin, as opposed to using an internal frame or truss that is then covered with a non-load-bearing skin or coachwork...
chassis construction, and utilising small radiator-mounted propeller to drive the cooling pump. The characteristic Voisin style of 'rational' coachwork he developed in conjunction with his collaborator André Noel-Noel prioritized lightness, central weight distribution, capacious luggage boxes and distinctively angular lines. The 1930s models with underslung chassis were strikingly low.

In the early 1930s, Gabriel Voisin could not pay all of his draughtsmen any more and a young creative engineer called André Lefèbvre
André Lefèbvre
André Lefèbvre was a French automobile engineer.André, René Lefèbvre was born in Louvres, France . He began his career as an aviation engineer working to Gabriel Voisin Company...
quit, recommended by Gabriel to Louis Renault
Louis Renault (industrialist)
Louis Renault was a French industrialist, one of the founders of Renault and a pioneer of the automobile industry....
. Lefèbvre finally entered Citroën
Citroën
Citroën is a major French automobile manufacturer, part of the PSA Peugeot Citroën group.Founded in 1919 by French industrialist André-Gustave Citroën , Citroën was the first mass-production car company outside the USA and pioneered the modern concept of creating a sales and services network that...
where he conducted the three most profitable car projects of the firm: the Traction Avant, the 2CV
Citroën 2CV
The Citroën 2CV |tax horsepower]]”) was an economy car produced by the French automaker Citroën between 1948 and 1990. It was technologically advanced and innovative, but with uncompromisingly utilitarian unconventional looks, and deceptively simple Bauhaus inspired bodywork, that belied the sheer...
and the DS
Citroën DS
The Citroën DS is an executive car produced by the French manufacturer Citroën between 1955 and 1975. Styled by Italian sculptor and industrial designer Flaminio Bertoni and the French aeronautical engineer André Lefèbvre, the DS was known for its aerodynamic futuristic body design and innovative...
, using a lot of Gabriel's lessons.

The 1936 Voisin was used in the 2008 film 'Indiana Jones and the Kingdom of the Crystal Skull" as well as the 2005 Film "Sahara
Sahara (2005 film)
Sahara is a 2005 action-comedy adventure film directed by Breck Eisner and based on the best-selling book of the same name by Clive Cussler...
" which featured the inline 6 sleeve valve in capulae red.


After the Second World War

After the war Voisin presented the little "Biscooter Voisin" at the Paris Motor Show of 1950. This was a small voiturette intended for an impoverished age, with a front mounted 125cc engine from Gnôme & Rhône. The business had by now been nationalised in the period of political turmoil that directly followed the Liberation, however. Government installed directors had no appreciation of the company's engineering traditions. The Voison company failed to progress with the Voison designed Biscooter and instead mandated a Mr Moglia, previously employed by Hotchkiss
Hotchkiss et Cie
Société Anonyme des Anciens Etablissements Hotchkiss et Cie was a French arms and car company established by United States engineer Benjamin B. Hotchkiss, who was born in Watertown, Connecticut. He moved to France and set up a factory, first at Viviez near Rodez in 1867, then at Saint-Denis near...
to develop an alternative voiturette. Moglia's design appeared at the 1952 Paris Motor Show fitted with the same Gnôme & Rhône engine, but on Moglia's design the engine was moved to the rear of the little vehicle. The braking and suspension systems on the Moglia vehicle were also quite different from those on Gabriel Voison's "Biscooter Voisin" offering from two years earlier. The Moglia design was nevertheless presented as the new "Biscooter Voisin", a nomenclature which at least one angry commentator found "abusive".

The vehicle was later adapted for Spanish conditions, and about 12,000 were produced in Catalonia
Catalonia
Catalonia is an autonomous community in northeastern Spain, with the official status of a "nationality" of Spain. Catalonia comprises four provinces: Barcelona, Girona, Lleida, and Tarragona. Its capital and largest city is Barcelona. Catalonia covers an area of 32,114 km² and has an...
, where the little car was known as the Biscúter
Biscúter
Biscúter was a microcar manufactured in Spain during the mid-20th century.-Background:...
, between 1953 and 1960.