Established on the Boulevard Devaux in Poissy
Poissy
Poissy is a commune in the Yvelines department in the Île-de-France in north-central France. It is located in the western suburbs of Paris from the center.In 1561 it was the site of a fruitless Catholic-Huguenot conference, the Colloquy at Poissy...
. Gregoire started off by manufacturing engines in 1903. But in 1904, the company started to manufacture automobiles. The design was considered nothing special, but was easily recognisable by its pear-shaped radiator
Radiator
Radiators are heat exchangers used to transfer thermal energy from one medium to another for the purpose of cooling and heating. The majority of radiators are constructed to function in automobiles, buildings, and electronics...
. The company made cars with single, two and four-cylinder engine
Cylinder (engine)
A cylinder is the central working part of a reciprocating engine or pump, the space in which a piston travels. Multiple cylinders are commonly arranged side by side in a bank, or engine block, which is typically cast from aluminum or cast iron before receiving precision machine work...
s.
In 1911, a six-cylinder and a four-cylinder sleeve-valve engine were also produced. The Gregoire company never sold a lot of automobiles. In 1913, only 500 cars were made. 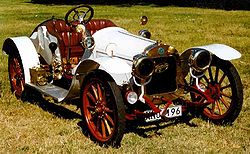 After World War I
World War I
World War I , which was predominantly called the World War or the Great War from its occurrence until 1939, and the First World War or World War I thereafter, was a major war centred in Europe that began on 28 July 1914 and lasted until 11 November 1918...
, Gregoire introduced its first car with an overhead-valve engine. Although the engine was only 2.3 litre, the car could reach up to 62 mi/h. The manufacture of this model was expensive, and it had disappointing financial results. In 1923, Gregoire only produced engines for the Bignan company. Gregoire closed its factory down in 1924.