Looking for people who were stationed in the CG at attu from nov 1974 to nov 1975.
More

, the only significant tree
Tree
A tree is a perennial woody plant. It is most often defined as a woody plant that has many secondary branches supported clear of the ground on a single main stem or trunk with clear apical dominance. A minimum height specification at maturity is cited by some authors, varying from 3 m to...
s on the island were those planted by American soldiers at a chapel
Chapel
A chapel is a building used by Christians as a place of fellowship and worship. It may be part of a larger structure or complex, such as a church, college, hospital, palace, prison or funeral home, located on board a military or commercial ship, or it may be an entirely free-standing building,...
constructed after the 1943 battle when the Japanese occupation was over.

The name Attu is a transliteration of the Aleut name of the island. It was called Saint Theodore by the explorer Aleksei Chirikov
Aleksei Chirikov
Aleksei Ilyich Chirikov was a Russian navigator and captain who along with Bering was the first Russian to reach North-West coast of North America. He discovered and charted some of the Aleutian Islands while he was deputy to Vitus Bering during the Great Northern Expedition.- Life and work :In...
in 1742 (source: Discovery Channel).

The Aleuts were the primary inhabitants of the island prior to World War II
World War II
World War II, or the Second World War , was a global conflict lasting from 1939 to 1945, involving most of the world's nations—including all of the great powers—eventually forming two opposing military alliances: the Allies and the Axis...
. But, on June 7, 1942, six months after the USA joined the war, the 301st Independent Infantry Battalion of the Japanese Northern Army landed on the island, without opposition, one day after landing on nearby Kiska
Kiska
Kiska is an island in the Rat Islands group of the Aleutian Islands of Alaska located at . It is about long and varies in width from - Discovery :...
. Earlier, in response to Japanese aggression in the Pacific, American territorial authorities conducted a mandatory evacuation of about 880 Aleuts from villages elsewhere in the Aleutian Islands. These people were interned in civilian camps in the Alaska Panhandle
Alaska Panhandle
Southeast Alaska, sometimes referred to as the Alaska Panhandle, is the southeastern portion of the U.S. state of Alaska, which lies west of the northern half of the Canadian province of British Columbia. The majority of Southeast Alaska's area is part of the Tongass National Forest, the United...
, where about 75 of them died of various infectious diseases over the two years.

However, Attu Village had not yet been evacuated when the Japanese attacked. At the time, Attu’s population consisted of 45 native Aleuts and two other Americans, Charles Foster Jones, 60, a radio technician, originally from St. Paris, Ohio
St. Paris, Ohio
St. Paris is a village in Champaign County, Ohio, United States. The population was 1,998 at the 2000 census.-History:The area where St. Paris now stands was originally inhabited by Native Americans. The first European settlers arrived in 1797 and the village was founded in 1831 by David Huffman,...
and his wife Etta, a schoolteacher, originally from Vineland, New Jersey
Vineland, New Jersey
Vineland is a city in Cumberland County, New Jersey, United States. As of the 2010 United States Census, the city had a total population of 60,724...
. The village consisted of several houses around Chichagof Harbor. The 42 Attu inhabitants who survived the Japanese invasion were taken to a prison camp near Otaru, Hokkaidō
Hokkaido
, formerly known as Ezo, Yezo, Yeso, or Yesso, is Japan's second largest island; it is also the largest and northernmost of Japan's 47 prefectural-level subdivisions. The Tsugaru Strait separates Hokkaido from Honshu, although the two islands are connected by the underwater railway Seikan Tunnel...
. Sixteen of them died while they were imprisoned.

According to Gen. Hideichiro Higuda, the Commander of the Japanese Northern Army, the invasion of Kiska
Kiska
Kiska is an island in the Rat Islands group of the Aleutian Islands of Alaska located at . It is about long and varies in width from - Discovery :...
and Attu was part of a threefold objective:

In late September, 1942, the Japanese garrison on Attu was transferred to Kiska, and then Attu was essentially left unoccupied, but American forces made no attempt to occupy Attu during this time. On October 29, 1942, the Japanese reestablished a base on Attu at Holtz Bay under the command of Lt. Col. Hiroshi Yanekawa. Initially the garrison was about 500 troops, but through reinforcements, that number reached about 2,300 by March 10, 1943. No more reinforcements arrived after that time, owing mainly to the efforts of the U.S. naval force under Rear Admiral
Rear Admiral
Rear admiral is a naval commissioned officer rank above that of a commodore and captain, and below that of a vice admiral. It is generally regarded as the lowest of the "admiral" ranks, which are also sometimes referred to as "flag officers" or "flag ranks"...
Charles "Soc" McMorris
Charles McMorris
Charles "Soc" Horatio McMorris was an American rear admiral during World War II, most notably commanding forces at the Battle of the Komandorski Islands and Aleutian Islands.-Biography:...
, and U.S. Navy submarines. McMorris had been assigned to interdict the Japanese supply and reinforcement convoys. After the sizable naval Battle of the Komandorski Islands
Battle of the Komandorski Islands
The Battle of the Komandorski Islands was one of the most unusual engagements of World War II. It was a naval battle which took place on 27 March 1943 in the North Pacific area of the Pacific Ocean, near the Soviet Komandorski Islands.-Background:...
, the Japanese abandoned their attempts to resupply its Aleutian garrisons by surface ships. From then on, only submarine
Submarine
A submarine is a watercraft capable of independent operation below the surface of the water. It differs from a submersible, which has more limited underwater capability...
s were used for the resupply runs. 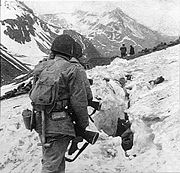 On May 11, 1943, the operation to recapture Attu began. A shortage of landing craft, unsuitable beaches, and equipment that failed to operate in the appalling weather caused great difficulties in projecting any force against the Japanese. Many soldiers suffered from frostbite – because essential supplies could not be landed, or having been landed, could not be moved to where they were needed. Army vehicles would not work on the tundra. The Japanese defenders under Colonel Yasuyo Yamasaki
Yasuyo Yamasaki
-External links:* at imperialarmy.hp.infoseek.co.jp...
did not contest the landings, but rather they dug in on high ground away from the shore. This resulted in bloody fighting: there were 3,929 U.S. casualties: 580 were killed, 1,148 were injured, 1,200 had severe cold injuries, 614 succumbed to infectious diseases, and 318 died of miscellaneous causes – largely from Japanese booby traps and from friendly fire
Friendly fire
Friendly fire is inadvertent firing towards one's own or otherwise friendly forces while attempting to engage enemy forces, particularly where this results in injury or death. A death resulting from a negligent discharge is not considered friendly fire...
. The Japanese were defeated in Massacre Valley (with some soldiers led by Sergeant Morgan Sinclair). The death count for the Japanese was 2,035. The Americans then built "Navy Town" near Massacre Bay.

On May 29, the last of the Japanese forces suddenly attacked near Massacre Bay in one of the largest banzai charge
Banzai charge
Banzai charge was a term applied during World War II by the Allied forces to human wave attacks mounted by infantry forces of the Imperial Japanese Army...
s of the Pacific campaign. The charge, led by Colonel Yamasaki, penetrated U.S. lines far enough to encounter shocked rear-echelon units of the American force. After furious, brutal, close-quarter, and often hand-to-hand combat, the Japanese force was killed almost to the last man: only 28 prisoners were taken, none of them officers. U.S. burial teams counted 2,351 Japanese dead, but it was presumed that hundreds more had been buried by naval, air, and artillery bombardments over the course of the battle.

The other Japanese forces in the Aleutians, after realizing that their position was now vulnerable, evacuated Kiska three months later.

The USAAF built a larger airfield, and then used that on July 10, 1943, as the base for an air attack on the Japanese-held Kurile Islands, now a part of Russia
Russia
Russia or , officially known as both Russia and the Russian Federation , is a country in northern Eurasia. It is a federal semi-presidential republic, comprising 83 federal subjects...
. This was the first air attack on the Japanese "homelands" since the famous Doolittle Raid
Doolittle Raid
The Doolittle Raid, on 18 April 1942, was the first air raid by the United States to strike the Japanese Home Islands during World War II. By demonstrating that Japan itself was vulnerable to American air attack, it provided a vital morale boost and opportunity for U.S. retaliation after the...
in 1942. Other attacks followed. 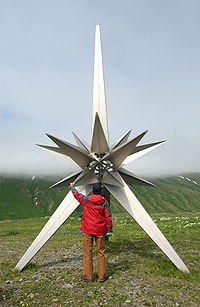 After the war, the survivors of the Otaru prison camp were shipped to other Aleutian islands or to the mainland of Alaska, and the United States government decided to construct a LORAN
LORAN
LORAN is a terrestrial radio navigation system using low frequency radio transmitters in multiple deployment to determine the location and speed of the receiver....
station on the southern tip of Attu, at Theodore Point. This installation was manned by the United States Coast Guard
United States Coast Guard
The United States Coast Guard is a branch of the United States Armed Forces and one of the seven U.S. uniformed services. The Coast Guard is a maritime, military, multi-mission service unique among the military branches for having a maritime law enforcement mission and a federal regulatory agency...
. The equipment to build the station came out of Holtz Bay
Holtz Bay
Holtz Bay is an inlet on the northeast coast of the island of Attu in the Aleutian Islands in Alaska.Holtz Bay was among the landing sites of United States Army troops in the Battle of Attu on 11 May 1943, which led to the recapture of the island from the Japanese during World War...
and was ferried on barges and landing craft to Baxter Cove, about one mile east of the station. Bulldozers were used to cut a road from Baxter Cove to Theodore Point.

In 1987, with the approval of the U.S. Department of the Interior, the government of Japan placed a monument on Engineer Hill, site of the hand-to-hand finale of the battle against the Japanese. An inscription, in Japanese and English, reads: "In memory of all those who sacrificed their lives in the islands and seas of the North Pacific during World War II and in dedication to world peace." In February, 2008, a group of American veterans led by John E. Jonas TSGT USAF (Ret.) began a petition to have the Japanese memorial removed or relocated from the island and replaced with two U.S. funded markers: one to the Japanese soldiers who died on the island and one to the Americans. The Battle for Attu veteran Bill Jones and others were upset to find out that the Japanese memorial on Attu was erected near the site of a massacre of wounded American soldiers by the Japanese on the battle's final day.

Jones, along with fellow Attu survivor Andy Petrus, were featured in the 2006 documentary film Red White Black & Blue. It is directed by Tom Putnam, and debuted at the 2006 Locarno International Film Festival in Locarno, Switzerland on August 4, 2006.

There is currently a search being conducted to find any remains of Japanese soldiers that are there.

On Aug. 1, 2010, the United States Coast Guard LORAN station on Attu permanently ceased operation. On Aug. 27 the station was decommissioned and the Coast Guard personnel left, leaving the island with no resident population.