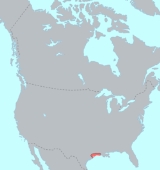 Encyclopedia
Atakapa is an extinct
Extinct language
An extinct language is a language that no longer has any speakers., or that is no longer in current use. Extinct languages are sometimes contrasted with dead languages, which are still known and used in special contexts in written form, but not as ordinary spoken languages for everyday communication...
language isolate
Language isolate
A language isolate, in the absolute sense, is a natural language with no demonstrable genealogical relationship with other languages; that is, one that has not been demonstrated to descend from an ancestor common with any other language. They are in effect language families consisting of a single...
native to southwestern Louisiana
Louisiana
Louisiana is a state located in the southern region of the United States of America. Its capital is Baton Rouge and largest city is New Orleans. Louisiana is the only state in the U.S. with political subdivisions termed parishes, which are local governments equivalent to counties...
and nearby coastal eastern Texas
Texas
Texas is the second largest U.S. state by both area and population, and the largest state by area in the contiguous United States.The name, based on the Caddo word "Tejas" meaning "friends" or "allies", was applied by the Spanish to the Caddo themselves and to the region of their settlement in...
. It was spoken by the Atakapa people (also known as "Ishak").

There were two varieties of Atakapa (i.e. dialects):

The Eastern Atakapa dialect is known from a French-Atakapa glossary with 287 entries written in 1802 by Martin Duralde. This dialect appears to be the most divergent of the three. These speakers lived around Poste des Attackapas (Saint Martinville) which is now Franklin, Louisiana
Franklin, Louisiana
Franklin is a city in and the parish seat of St. Mary Parish, Louisiana, United States. The population was 8,354 at the 2000 census. It is part of the Morgan City Micropolitan Statistical Area.-History:...
.

The Western Atakapa dialect is the best known with words, sentences, and texts recorded from 1885, 1907, and 1908 by Albert Gatschet. The main language consultant was recorded in Lake Charles, Louisiana
Lake Charles, Louisiana
Lake Charles is the fifth-largest incorporated city in the U.S. state of Louisiana, located on Lake Charles, Prien Lake, and the Calcasieu River. Located in Calcasieu Parish, a major cultural, industrial, and educational center in the southwest region of the state, and one of the most important in...
. The last speakers were Louison Huntington, Delilah Moss, Teet Verdine, and Armojean Reon. An older vocabulary is in a list of 45 words recorded in 1721 by Jean Béranger. These speakers were captured around Galveston Bay
Galveston Bay
Galveston Bay is a large estuary located along the upper coast of Texas in the United States. It is connected to the Gulf of Mexico and is surrounded by sub-tropic marshes and prairies on the mainland. The water in the Bay is a complex mixture of sea water and fresh water which supports a wide...
.

Although John Swanton claimed that Béranger vocabulary was an Akokisa dialect spoken by the Akokisa
Akokisa
The Akokisa were the indigenous tribe that lived on Galveston Bay and the lower Trinity and San Jacinto rivers in Texas, primarily in the present-day Greater Houston area...
, there is no real evidence to support this connection.

While considered an isolate, there have been attempts to connect Atakapa with other languages of the Southeast. In 1919 John R. Swanton
John R. Swanton
John Reed Swanton was an American anthropologist and linguist who worked with Native American peoples throughout the United States. Swanton achieved recognition in the fields of ethnology and ethnohistory...
proposed a Tunican language family that would include Atakapa, Tunica
Tunica language
The Tunica language was a language isolate spoken in the Central and Lower Mississippi Valley by in the United States by Native American Tunica peoples. There are no known speakers of the Tunica language remaining.When the last known fluent speaker Sesostrie Youchigant died, the language became...
, and Chitimacha
Chitimacha language
The Chitimacha language is a language isolate historically spoken by the Chitimacha people of Louisiana, United States. It went extinct in 1940 with the death of the last fluent speaker, Delphine Ducloux....
; Morris Swadesh
Morris Swadesh
Morris Swadesh was an influential and controversial American linguist. In his work, he applied basic concepts in historical linguistics to the Indigenous languages of the Americas...
would later provide later work focusing on connections between Atakapa and Chitimacha. Mary Haas
Mary Haas
Mary Rosamund Haas was an American linguist who specialized in North American Indian languages, Thai, and historical linguistics.-Early work in linguistics:...
later expanded the proposal by adding Natchez
Natchez language
Natchez was a language of Louisiana. Its two last fluent speakers, Watt Sam and Nancy Raven, died in the late 1930s. The Natchez nation is now working to revive it as a spoken language.-Classification:...
and the Muskogean languages
Muskogean languages
Muskogean is an indigenous language family of the Southeastern United States. Though there is an ongoing debate concerning their interrelationships, the Muskogean languages are generally divided into two branches, Eastern Muskogean and Western Muskogean...
, a hypothesis known as Gulf
Gulf languages
Gulf is a proposed native North American language family composed of the Muskogean languages, along with four extinct language isolates: Natchez, Tunica, Atakapa, and Chitimacha....
. These proposed families have not been proven.