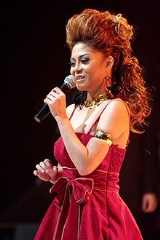 Encyclopedia
Asia Agcaoíli is a Filipino
Philippines
The Philippines , officially known as the Republic of the Philippines , is a country in Southeast Asia in the western Pacific Ocean. To its north across the Luzon Strait lies Taiwan. West across the South China Sea sits Vietnam...
actress, model, sexy columnist of FHM
FHM
FHM, originally published as For Him Magazine, is an international monthly men's lifestyle magazine.- History :The magazine began publication in 1985 in the United Kingdom under the name For Him and changed its title to FHM in 1994 when Emap Consumer Media bought the magazine, although the full For...
Philippines and TV
Television
Television is a telecommunication medium for transmitting and receiving moving images that can be monochrome or colored, with accompanying sound...
and radio host.

She was first seen in a reality TV show in ABC's
Associated Broadcasting Company
The Associated Broadcasting Company, Inc is a television network in the Philippines, with main broadcast facilities and transmitter located at 762 Quirino Highway, San Bartolome, Novaliches, Quezon City. The network was previously known as the , Associated Broadcasting Company remains the legal...
Singles where she agreed to acquire breast implants and had it broadcasted. She then joined in an episode of GMA Network
GMA Network
GMA Network is a major commercial television & radio network in the Philippines. GMA Network is owned by GMA Network, Inc. a publicly listed company...
reality game show Extra Challenge
Extra Challenge
Extra Challenge was a one-of-a-kind Filipino reality show that has blazed a trail in Philippine television. The show has attracted a wide following after it presented episodes where strange yet amusing predicaments befall on participants. It is shown in the Philippines by GMA Network every weekday...
were she displayed her intelligence and confidence when she was faced with conservative moralists who depicted her sexy ways.


Life in Radio and Magazine

She was a disk jockey on a radio station, Magic 89.9
Magic 89.9
DWTM is the flagship FM station of Quest Broadcasting Incorporated/The Radio Partners Inc. Known as Magic 89.9, the station's studios and transmitter are located at Paragon Plaza, Mandaluyong City...
until January 14, 2007, and an advice columnist for FHM Philippines] called "Asia's Sex Confidential. Agcaoíli is known for being very open in talking about sex.


As a regular comedian character

Asia was a regular on the ABS-CBN
ABS-CBN
ABS–CBN Corporation is a Philippine-based media conglomerate. It is the Philippines' largest media and entertainment conglomerate. The corporation was the merger of Alto Broadcasting System which at that time owned by James Lindenberg and Antonio Quirino, and the Chronicle Broadcasting Network ...
show, Bida si Mister, Bida si Misis. She has also appeared in Sex Guru, the first Philippine-made sex education film.


As an FHM Sex Columnist

Asia has a monthly column in FHM Philippines re-published on FHM.com.ph entitled Asia's Sex Confidential, where she talks about love, sex and relationships.

After her breast was exposed in a March 9, 2003, edition of MTB
MTB
MTB may refer to:* Mike Thomas Brown, Professional Mixed Martial Artist & WEC Featherweight Champion* Matlock Bath railway station, England; National Rail station code MTB* Motor Torpedo Boat* Mountain bike or Mountain biking* Mycobacterium tuberculosis...
, a variety show
Variety show
A variety show, also known as variety arts or variety entertainment, is an entertainment made up of a variety of acts, especially musical performances and sketch comedy, and normally introduced by a compère or host. Other types of acts include magic, animal and circus acts, acrobatics, juggling...
, Agcaoíli was suspended from the show for 20 days by the Movie and Television Review and Classification Board (MTRCB).

In a memorandum, the MTRCB said it found the program "objectionable" because of Agcaoili's "accidental left breast exposure."

Agcaoili spearheads the Pinoy Big Brother
Pinoy Big Brother
Pinoy Big Brother is the Philippine version of the reality television show Big Brother . It follows the same premise as its many foreign counterparts around the world: twelve Philippine residents are forced to live with each other inside a house for about 3 months or at least 100 days...
show for the viewers of Studio 23
Studio 23
Studio 23 is a Filipino television network owned by the ABS-CBN Corporation. The network is named for its flagship station in Metro Manila, DWAC-TV, which is carried on UHF channel 23...
. Her show, called Pinoy Big Brother: Si Kuya, KaBarkada Mo, not only features snippets from the primetime telecast the night before, but also features opinion polls both from the man on the street and those sending SMS
SMS
SMS is a form of text messaging communication on phones and mobile phones. The terms SMS or sms may also refer to:- Computer hardware :...
, spoof segments (such as predictions from "prominent" fortune tellers and insider news from the "resident" deep penetration agent, a cockroach), and live feed from inside the house.

She is also one of the hosts of Breakfast on Studio 23
Studio 23
Studio 23 is a Filipino television network owned by the ABS-CBN Corporation. The network is named for its flagship station in Metro Manila, DWAC-TV, which is carried on UHF channel 23...
every Thursday and was a part of teleseries Vietnam Rose
Vietnam Rose
Vietnam Rose is a television series that was aired on the Philippine station, ABS-CBN.-Synopsis:Vietnam Rose follows the journey of Nguyen Dang Thien Yeu, a Vietnamese woman, who embraces life in a foreign land to forget the memory of her tragic past....
on ABS-CBN
ABS-CBN
ABS–CBN Corporation is a Philippine-based media conglomerate. It is the Philippines' largest media and entertainment conglomerate. The corporation was the merger of Alto Broadcasting System which at that time owned by James Lindenberg and Antonio Quirino, and the Chronicle Broadcasting Network ...
, where she teamed up with her Bida si Mister, Bida si Misis and the Philippine's Diamond Star, Maricel Soriano.