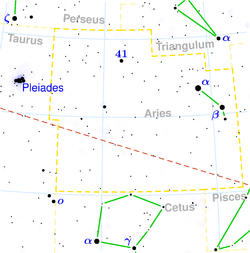 Asvini is the first nakshatra
Nakshatra
Nakshatra is the term for lunar mansion in Hindu astrology. A nakshatra is one of 27 sectors along the ecliptic...
(lunar mansion
Lunar mansion
A lunar mansion is a segment of the ecliptic through which the moon moves in its orbit around the earth, often used by ancient cultures as part of their calendar system...
) in Hindu astrology, corresponding to the head of Aries, including the stars β
Beta Arietis
Beta Arietis is a star in the constellation Aries, marking the Ram's second horn. It has the traditional name Sheratan , and the Flamsteed designation 6 Arietis...
and γ
Gamma Arietis
Gamma Arietis is a triple star system, 204 light years distant, in the constellation Aries. It has the traditional name Mesarthim, of obscure origin, and has been called "the First Star in Aries" as having been at one time the nearest visible star to the equinoctial point...
Arietis
Aries (constellation)
Aries is one of the constellations of the zodiac, located between Pisces to the west and Taurus to the east. Its name is Latin for ram, and its symbol is , representing a ram's horns...
.
The name aśvinī is used by Varahamihira
Varahamihira
Varāhamihira , also called Varaha or Mihira, was an Indian astronomer, mathematician, and astrologer who lived in Ujjain...
(6th century). The older name of the asterism, found in the Atharvaveda
Atharvaveda
The Atharvaveda is a sacred text of Hinduism and one of the four Vedas, often called the "fourth Veda"....
(AVS 19.7; in the dual) and in Panini (4.3.36), was aśvayúj "harnessing horses"

Ashvini is ruled by Ketu
Ketu (mythology)
Ketu is the descending lunar node. 'Ketu' is said to be the body of Rahu, after the head of the asura was cut off by God Vishnu. In Hindu mythology, Ketu is generally referred to as a "shadow" planet. It is believed to have a tremendous impact on human lives and also the whole creation...
, the descending lunar node.
In electional astrology
Electional astrology
Electional astrology, also known as event astrology, is a branch found in most traditions of astrology in which a practitioner decides the most appropriate time for an event based on the astrological auspiciousness of that time...
, Asvini is classified as a Small constellation, meaning that it is believed to be advantageous to begin works of a precise or delicate nature while the moon is in Ashvini.
Asvini is ruled by the Ashvins
Ashvins
The Ashvins , in Hindu mythology, are divine twin horsemen in the Rigveda, sons of Saranya , a goddess of the clouds and wife of Surya in his form as Vivasvat. The Ashvins are Vedic gods symbolising the shining of sunrise and sunset, appearing in the sky before the dawn in a golden chariot,...
, the heavenly twins who served as physicians to the gods. Personified, Asvini is considered to be the wife of the Asvini Kumaras. Ashvini is represented either by the head of a horse
Horse
The horse is one of two extant subspecies of Equus ferus, or the wild horse. It is a single-hooved mammal belonging to the taxonomic family Equidae. The horse has evolved over the past 45 to 55 million years from a small multi-toed creature into the large, single-toed animal of today...
, or by honey
Honey
Honey is a sweet food made by bees using nectar from flowers. The variety produced by honey bees is the one most commonly referred to and is the type of honey collected by beekeepers and consumed by humans...
and the bee hive
Beehive
A beehive is a structure in which bees live and raise their young.Beehive may also refer to:Buildings and locations:* Bee Hive, Alabama, a neighborhood in Alabama* Beehive , a wing of the New Zealand Parliament Buildings...
.

Traditional Hindu given names are determined by which pada (quarter) of a nakshatra the moon was in at the time of birth. In the case of Ashvini, the given name would begin with the following syllables:
The source of this article is wikipedia, the free encyclopedia.  The text of this article is licensed under the GFDL.