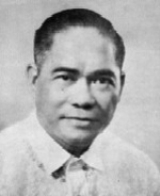 Arturo M. Tolentino was born in Manila of humble parentage. A self-made man, he is one of the best leaders in the legislative arm of the government. His record in public service speaks for itself.

As a debate
Debate
Debate or debating is a method of interactive and representational argument. Debate is a broader form of argument than logical argument, which only examines consistency from axiom, and factual argument, which only examines what is or isn't the case or rhetoric which is a technique of persuasion...
r and orator
Oratory
Oratory is a type of public speaking.Oratory may also refer to:* Oratory , a power metal band* Oratory , a place of worship* a religious order such as** Oratory of Saint Philip Neri ** Oratory of Jesus...
, he won seven gold medals (including the Quezon Medal) and two silver loving cups. He held the title of “Inter-Collegiate Oratorical Champion of the Philippines” in 1934. He successfully debated with American students from the University of Oregon
University of Oregon
-Colleges and schools:The University of Oregon is organized into eight schools and colleges—six professional schools and colleges, an Arts and Sciences College and an Honors College.- School of Architecture and Allied Arts :...
in 1933 and from the University of Washington
University of Washington
University of Washington is a public research university, founded in 1861 in Seattle, Washington, United States. The UW is the largest university in the Northwest and the oldest public university on the West Coast. The university has three campuses, with its largest campus in the University...
in 1934. In U.P., he was also editor-in-chief of the Philippine Collegian and a member of the Upsilon Sigma Phi
Upsilon Sigma Phi
-History:The Upsilon Sigma Phi is the oldest Greek-letter fraternity in Asia . Nebulously formed in 1918.It was formally organized on November 19, 1920 in a meeting held at the Metropolitan Restaurant in Intramuros. Four months later, on March 24, 1921, the Greek letters ΥΣΦ standing for the...
.

Tolentino engaged in the practice of law after passing the bar in 1934, and was a recognized legal luminary.

Tolentino was first elected as a Representative from Manila in 1949. He was re-elected in 1953. Shortly after his re-election as Congressman Arturo M. Tolentino was given the position of Majority Floor Leader, a position he has to hold until he entered the Senate four years later and one which, though less glamorous than that of Speaker, he preferred and enjoyed.

This was a very senior position for such a young man and inexperienced politician. But my father’s reputation of toughness had earned him the respect of President Magsaysay. As he took his seat in the House of Representatives that day he glowered at the assembled members and said, “I warn you gentlemen, I was once a champion wrestler and weightlifter!”

The duties and responsibilities of Majority Floor Leader and the reason Arturo M. Tolentino’s selection was neatly explained in an article by Manuel Martinez in “Tempo” October 7, 1983.

“Tolentino was often involved in great intellectual battles and feared for his parliamentary prowess. That is why he was elected floor leader at a very young age.

In legislation, the majority floor leader, not the Speaker or the presiding officer, is the key man around whom the parliamentary process revolves. The majority floor leader is the lightning rod, the clearing house, the yeoman and work-horse and spark-plug, the whipping boy if he does not watch out, the beast of burden, and center of attention. Only the tough are chosen as floor leaders.

And so Tolentino discharged his function with awesome skill. And so it came to pass that there was born a saying, given as wise advice to newcomers to the House and later the Senate, where he was floor leader! ‘Neophytes should observe two things above all. First they should learn parliamentary rules by heart. Second, they should pray not to tangle with Tolentino in a floor debate!”

It was not my father’s intention to run for the Senate. He was confident of re-election as Congressman, had already been nominated by his party for Manila and already started his campaigning when he was nominated for the Senate.

He left the decision to his party leaders because he was unsure of which route to choose. The party leaders agreed to allow him to accept the Senate nomination.

Many of the candidates were asked to make financial contribution for their campaign expense. My father did not have sufficient funds. He remembered when I asked him how he managed this financial difficulties.

"I have never forgotten the generosity of Senator Oscar Ledesma who paid my contribution and will always be grateful to him. As a sign of my appreciation, I saw to it that I was with him during the division of candidates into campaign teams and strongly endorsed his policies in my speeches.”

The Nationalista party had a strong Senatorial ticket. In fact, the only casualty that might occur was thought by some leaders to be my father. Their concern turned out to be unnecessary for when the returns came in, Arturo M. Tolentino was second behind Gil Puyat.

“Where did you get all these votes?” Amang Rodriguez, the party president asked him.

“I have a secret army,” my father replied laughingly. “All over the country there are thousands of lawyers who were once my student and thousands of high school graduates who studied my text books.”

On March 7, 1957 then President Magsaysay took off from the airport in Cebu. He was at the height of his popularity. A few minutes later, his plane crashed into the side of the mountain. All on board, with the exception of one newspaperman were killed.

"I had been going with the President on Provincial trips because the President wanted to introduce me to party leaders and rural electorate for possible candidacy as a senator in 1957. Normally he would go to series of towns briefly speaking in one before proceeding to the next. I would start my speech immediately after he had finished, then follow him as soon as mine was over.
On this occasion however I was committed to a speaking engagement in Manila even though I had been scheduled to accompany Magsaysay. I explained my predicament to the President who was very understanding, who gave my seat to the Education Secretary then, who perished with the others on that ill fated flight."

Tolentino said:
"I seem to have a lot of frustrations that come along in my life without invitation. When I was Senate President, my term was for two years. But somehow I understood later that President Marcos had made an agreement with another Senator, - Senator Puyat, that after one year he (Puyat) would take my place. In other words we would split the two year term between us.

I was not aware of that arrangement. President Marcos never informed me. So, after twelve months of my term as Senate President, Puyat insisted that he takes over. Naturally I resisted and pointed out that my term had not yet expired. He kept citing an agreement, but I pointed out there was no such agreement.

But at the next session of the Senate, Marcos maneuvered the other Senators to comply with this “commitment”, and voted for Puyat. As a result I got ousted as Senate President half way through my term of office.”

He was chosen by Ferdinand Marcos
Ferdinand Marcos
Ferdinand Emmanuel Edralin Marcos, Sr. was a Filipino leader and an authoritarian President of the Philippines from 1965 to 1986. He was a lawyer, member of the Philippine House of Representatives and a member of the Philippine Senate...
as his vice-presidential running mate for the February 7, 1986 snap elections
Philippine presidential election, 1986
The Presidential and Vice-Presidential snap elections were held on February 7, 1986 in the Philippines.-Background:President Ferdinand E...
. They were against the united opposition of Corazon Aquino
Corazon Aquino
Maria Corazon Sumulong Cojuangco-Aquino was the 11th President of the Philippines and the first woman to hold that office in Philippine history. She is best remembered for leading the 1986 People Power Revolution, which toppled Ferdinand Marcos and restored democracy in the Philippines...
and Salvador Laurel
Salvador Laurel
Salvador Roman Hidalgo Laurel , also known as Doy Laurel, was Vice President of the Philippines from 1986 to 1992 under Corazon Aquino. Before that, he briefly served as Aquino's first Prime Minister from February 25 to March 25 of 1986...
. According to the National Movement for Free Elections (NAMFREL) final tally, Aquino and Laurel were consistently in the lead. The final tally showed Laurel winning by over 800,000 votes—roughly the same margin by which it showed Aquino defeating Marcos. However, according to the COMELEC tally, Tolentino won over Laurel with a margin of around one million votes. He became the Vice President of the Philippines on February 16, 1986. His, however, was a short-lived tenure and without actual exercise of power and authority. The allegedly fraudulent outcome would eventually lead to the People Power Revolution which ousted Marcos and installed Aquino as president. 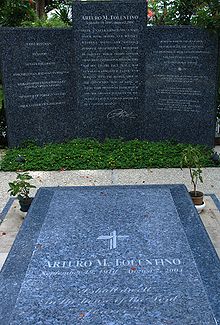 Tolentino then would launch a coup
Coup d'état
A coup d'état state, literally: strike/blow of state)—also known as a coup, putsch, and overthrow—is the sudden, extrajudicial deposition of a government, usually by a small group of the existing state establishment—typically the military—to replace the deposed government with another body; either...
on July 6, 1986 declaring that since Marcos was in exile, he was constitutionally the acting President of the Philippines. Marcos allies and about 100 soldiers marched to the luxurious Manila Hotel
Manila Hotel
The Manila Hotel is a 570-room, five star hotel in Manila, Philippines, located in the heart of the Manila Bay area. The Manila Hotel is the oldest premiere hotel in the Philippines, built in 1909 to rival Malacañang Palace, the official residence of the President of the Philippines, and opened in...
, barricading it with trucks, and installing a rebel seat of government there. He was expecting massive support, but only several thousands of Marcos loyalists supported the attempted power grab. On July 8, he agreed to disperse his thousands of civilian supporters and about a hundred military backers, ending the failed coup attempt.

When the 1987 Constitution of the Philippines was overwhelmingly approved in a plebiscite, Tolentino announced he would respect the will of the people.


Return to the Senate

In 1992, he successfully ran for the Senate. However, his bid for reelection in 1995 was not successful and he retired from politics.

Respected by many Filipinos not only for his extemporaneous amendments to major measures and enlightened brand of politics, Tolentino was also known as a scholar, writer, diplomat, and distinguished author of law books.

He died of a heart attack
Myocardial infarction
Myocardial infarction or acute myocardial infarction , commonly known as a heart attack, results from the interruption of blood supply to a part of the heart, causing heart cells to die...
on the night of August 2, 2004 at the age of 93. His remains lie in state at the Libingan ng mga Bayani
Libingan ng mga Bayani
is a national cemetery within Fort Bonifacio in Taguig City, Metro Manila in the Philippines. It was established as a fitting resting place for Filipino military personnel from privates to generals, as well as heroes and martyrs...
.

He had seven children, as acknowledged in his last will and testament (1971): Arturo Jr., Evelyn, and Annabella with Consuelo David; Bernadette, Salvador, and Victorio with Constancia Conde; and Ma. Elenita with Rosita Robles.