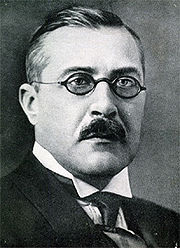 Artur Kapp was an Estonian
Estonians
Estonians are a Finnic people closely related to the Finns and inhabiting, primarily, the country of Estonia. They speak a Finnic language known as Estonian...
composer.

Born in Suure-Jaani
Suure-Jaani
Suure-Jaani is a town in the northern part of the county of Viljandimaa in Southern Central Estonia, 25 kilometres north of the town of Viljandi. Suure-Jaani is the centre of Suure-Jaani rural municipality.-History:...
, Estonia
Estonia
Estonia , officially the Republic of Estonia , is a state in the Baltic region of Northern Europe. It is bordered to the north by the Gulf of Finland, to the west by the Baltic Sea, to the south by Latvia , and to the east by Lake Peipsi and the Russian Federation . Across the Baltic Sea lies...
, then part of the Governorate of Livonia, Russian Empire
Russian Empire
The Russian Empire was a state that existed from 1721 until the Russian Revolution of 1917. It was the successor to the Tsardom of Russia and the predecessor of the Soviet Union...
, he was the son of Joosep Kapp, who was also a classically trained musician. Kapp began his musical career studying organ at the Saint Petersburg Conservatory
Saint Petersburg Conservatory
The N. A. Rimsky-Korsakov Saint Petersburg State Conservatory is a music school in Saint Petersburg. In 2004, the conservatory had around 275 faculty members and 1,400 students.-History:...
as a student of both Louis Homilius and composition with Nikolai Rimsky-Korsakov
Nikolai Rimsky-Korsakov
Nikolai Andreyevich Rimsky-Korsakov was a Russian composer, and a member of the group of composers known as The Five.The Five, also known as The Mighty Handful or The Mighty Coterie, refers to a circle of composers who met in Saint Petersburg, Russia, in the years 1856–1870: Mily Balakirev , César...
in 1891. Kapp graduated from the Conservatory in 1900 as a composer and from 1904 until 1920 worked as a music director in the southern Russia
Russia
Russia or , officially known as both Russia and the Russian Federation , is a country in northern Eurasia. It is a federal semi-presidential republic, comprising 83 federal subjects...
n city of Astrakhan
Astrakhan
Astrakhan is a major city in southern European Russia and the administrative center of Astrakhan Oblast. The city lies on the left bank of the Volga River, close to where it discharges into the Caspian Sea at an altitude of below the sea level. Population:...
, then returning to Estonia as a professor and conductor at the Tallinn
Tallinn
Tallinn is the capital and largest city of Estonia. It occupies an area of with a population of 414,940. It is situated on the northern coast of the country, on the banks of the Gulf of Finland, south of Helsinki, east of Stockholm and west of Saint Petersburg. Tallinn's Old Town is in the list...
Conservatory where he counted among his students such future notable Estonian composers as Evald Aav
Evald Aav
Evald Aav was an Estonian composer born in Tallinn, Governorate of Estonia, Russian Empire. He studied music composition there with Artur Kapp and wrote primarily vocal music to words in the Estonian language. In 1928 he composed the first national Estonian opera, Vikerlased . The opera premiered...
, Edgar Arro, Gustav Ernesaks
Gustav Ernesaks
Gustav Ernesaks was an Estonian composer and a choir conductor....
, Helen Tobias-Duesberg
Helen Tobias-Duesberg
Helen Tobias-Duesberg was an Estonian-American composer.Helen Tobias was born in New York City on June 11, 1919. Tobias was the youngest daughter of Estonian composer, Rudolf Tobias. She studied music composition at the Tallinn Conservatoire, which is now known as the Estonian Academy of Music...
, Riho Päts and Enn Võrk. He is, along with Rudolf Tobias
Rudolf Tobias
Rudolf Tobias was the first Estonian professional composer, as well as a professional organist. He studied at the Saint Petersburg Conservatory...
(1873-1918), generally considered to be one of the founders of Estonian symphonic music.

Kapp's son Eugen
Eugen Kapp
Eugen Kapp was an Estonian composer and music educator. Characterized by simple harmonies, march rhythms and an appealing melodic style, his music is reflective upon the musical ideas favoured by the Stalinist regime of the 1940s and 1950s...
(1908–1996) and nephew Villem (1913–1964) became notable composers as well, having studied at the Tallinn Conservatory under direction of the elder Kapp.

Some of Kapp's most enduring works are the 1899 overture
Overture
Overture in music is the term originally applied to the instrumental introduction to an opera...
Don Juan and the 1900 cantata
Cantata
A cantata is a vocal composition with an instrumental accompaniment, typically in several movements, often involving a choir....
Paradiis ja Peri ("Paradise and Peri"), both of which are large scale works that prominently feature the organ. He is possibly best recalled for his oratorio
Oratorio
An oratorio is a large musical composition including an orchestra, a choir, and soloists. Like an opera, an oratorio includes the use of a choir, soloists, an ensemble, various distinguishable characters, and arias...
Hiiob ("Job") and Metsateel ("On A Road Through The Woods"), a piece for solo voice. Kapp's work is abundant and diverse and covers many classical genres. He wrote five symphonies, five concertos, overtures, four orchestral suites, in addition to the above.

After the Soviet invasion of Estonia during World War II
World War II
World War II, or the Second World War , was a global conflict lasting from 1939 to 1945, involving most of the world's nations—including all of the great powers—eventually forming two opposing military alliances: the Allies and the Axis...
, Kapp was forced to resign his position as a composer and retired to Suure-Jaani. He died there in 1952 at the age of 73. His professional career spanned more than five decades.

In 1998, the annual Suure-Jaani Music Days festival was founded to celebrate Artur Kapp's musical legacy, as well as that of his sons and fellow composer Mart Saar
Mart Saar
Mart Saar was an Estonian composer, organist and collector of folk songs.-Childhood:Saar was born at the small borough of Hüpassaare, Estonia, then part of the Livonian Governorate, Russian Empire, to a family of forest keepers. He received his education in the village school at Kaansoo and the...
(1882-1963), who was also from the area. The Festival is organized by the Eesti Kontsert in conjunction with the town of Suure-Jaani and the International Artur Kapp Society. The venues for performances include Lutheran and Orthodox
Eastern Orthodox Church
The Orthodox Church, officially called the Orthodox Catholic Church and commonly referred to as the Eastern Orthodox Church, is the second largest Christian denomination in the world, with an estimated 300 million adherents mainly in the countries of Belarus, Bulgaria, Cyprus, Georgia, Greece,...
churches, the Kapp Museum, and the song festival stage.