Encyclopedia
Artificial respiration is the act of assisting or stimulating respiration
Respiration (physiology)
'In physiology, respiration is defined as the transport of oxygen from the outside air to the cells within tissues, and the transport of carbon dioxide in the opposite direction...
, a metabolic process referring to the overall exchange of gases in the body by pulmonary ventilation, external respiration, and internal respiration. Assistance takes many forms, but generally entails providing air for a person who is not breathing or is not making sufficient respiratory effort on their own (although it must be used on a patient with a beating heart or as part of cardiopulmonary resuscitation
Cardiopulmonary resuscitation
Cardiopulmonary resuscitation is an emergency procedure which is performed in an effort to manually preserve intact brain function until further measures are taken to restore spontaneous blood circulation and breathing in a person in cardiac arrest. It is indicated in those who are unresponsive...
to achieve the internal respiration).

Pulmonary anton ventilation (and hence external parts of respiration) is achieved through manual insufflation of the lungs either by the rescuer blowing into the patient's lungs, or by using a mechanical device to do so. This method of insufflation has been proved more effective than methods which involve mechanical manipulation of the patient's chest or arms, such as the Silvester method. It is also known as Expired Air Resuscitation (EAR), Expired Air Ventilation (EAV), mouth-to-mouth resuscitation, rescue breathing or colloquially the kiss of life.

Artificial respiration is a part of most protocols for performing cardiopulmonary resuscitation
Cardiopulmonary resuscitation
Cardiopulmonary resuscitation is an emergency procedure which is performed in an effort to manually preserve intact brain function until further measures are taken to restore spontaneous blood circulation and breathing in a person in cardiac arrest. It is indicated in those who are unresponsive...
(CPR) making it an essential skill for first aid
First aid
First aid is the provision of initial care for an illness or injury. It is usually performed by non-expert, but trained personnel to a sick or injured person until definitive medical treatment can be accessed. Certain self-limiting illnesses or minor injuries may not require further medical care...
. In some situations, artificial respiration is also performed separately, for instance in near-drowning
Drowning
Drowning is death from asphyxia due to suffocation caused by water entering the lungs and preventing the absorption of oxygen leading to cerebral hypoxia....
and opiate
Opiate
In medicine, the term opiate describes any of the narcotic opioid alkaloids found as natural products in the opium poppy plant.-Overview:Opiates are so named because they are constituents or derivatives of constituents found in opium, which is processed from the latex sap of the opium poppy,...
overdoses. The performance of artificial respiration in its own is now limited in most protocols to health professionals, whereas lay first aiders are advised to undertake full CPR in any case where the patient is not breathing sufficiently.

Mechanical ventilation
Mechanical ventilation
In medicine, mechanical ventilation is a method to mechanically assist or replace spontaneous breathing. This may involve a machine called a ventilator or the breathing may be assisted by a physician, respiratory therapist or other suitable person compressing a bag or set of bellows...
involves the use of a mechanical ventilator to move air in and out of the lungs when an individual is unable to breathe on his or her own, for example during surgery
Surgery
Surgery is an ancient medical specialty that uses operative manual and instrumental techniques on a patient to investigate and/or treat a pathological condition such as disease or injury, or to help improve bodily function or appearance.An act of performing surgery may be called a surgical...
with general anesthesia or when an individual is in a coma
Coma
In medicine, a coma is a state of unconsciousness, lasting more than 6 hours in which a person cannot be awakened, fails to respond normally to painful stimuli, light or sound, lacks a normal sleep-wake cycle and does not initiate voluntary actions. A person in a state of coma is described as...
.

Insufflation, also known as 'rescue breaths' or 'ventilations', is the act of mechanically forcing air into a patient's respiratory system. This can be achieved via a number of methods, which will depend on the situation and equipment available. All methods require good airway management
Airway management
In cardiopulmonary resuscitation, anaesthesia, emergency medicine, intensive care medicine and first aid, airway management is the process of ensuring that:# there is an open pathway between a patient’s lungs and the outside world, and...
to perform, which ensures that the method is effective. These methods include:

Most training organisations recommend that in any of the methods involving mouth to patient, that a protective barrier is used, to minimise the possibility of cross infection (in either direction).

Barriers available include pocket masks and keyring-sized face shields. These barriers are an example of Personal Protective Equipment to guard the face against splashing, spraying or splattering of blood or other potentially infectious materials.

These barriers should provide a one-way filter valve which lets the air from the rescuer deliver to the patient while any substances from the patient (e.g. vomit, blood) cannot reach the rescuer. Many adjuncts are single use, though if they are multi use, after use of the adjunct, the mask must be cleaned and autoclave
Autoclave
An autoclave is an instrument used to sterilize equipment and supplies by subjecting them to high pressure saturated steam at 121 °C for around 15–20 minutes depending on the size of the load and the contents. It was invented by Charles Chamberland in 1879, although a precursor known as the...
d and the filter replaced.

The CPR mask is the preferred method of ventilating a patient when only one rescuer is available. Many feature 18mm inlets to support supplemental oxygen, which increases the oxygen being delivered from the approximate 17% available in the expired air of the rescuer to around 40-50%.

Tracheal intubation
Tracheal intubation
Tracheal intubation, usually simply referred to as intubation, is the placement of a flexible plastic or rubber tube into the trachea to maintain an open airway or to serve as a conduit through which to administer certain drugs...
is often used for short term mechanical ventilation. A tube is inserted through the nose (nasotracheal intubation) or mouth (orotracheal intubation) and advanced into the trachea
Vertebrate trachea
In tetrapod anatomy the trachea, or windpipe, is a tube that connects the pharynx or larynx to the lungs, allowing the passage of air. It is lined with pseudostratified ciliated columnar epithelium cells with goblet cells that produce mucus...
. In most cases tubes with inflatable cuffs are used for protection against leakage and aspiration. Intubation with a cuffed tube is thought to provide the best protection against aspiration. Tracheal tubes inevitably cause pain and coughing. Therefore, unless a patient is unconscious or anesthetized for other reasons, sedative drugs are usually given to provide tolerance of the tube. Other disadvantages of tracheal intubation include damage to the mucosal lining of the nasopharynx
Nasopharynx
The nasopharynx is the uppermost part of the pharynx. It extends from the base of the skull to the upper surface of the soft palate; it differs from the oral and laryngeal parts of the pharynx in that its cavity always remains patent .-Lateral:On its lateral wall is the pharyngeal ostium of the...
or oropharynx
Oropharynx
The Oropharynx reaches from the Uvula to the level of the hyoid bone.It opens anteriorly, through the isthmus faucium, into the mouth, while in its lateral wall, between the two palatine arches, is the palatine tonsil....
and subglottic stenosis.


Efficiency of mouth to patient insufflation

Normal atmospheric air contains approximately 21% oxygen when created in. After gaseous exchange has taken place in the lungs, with waste products (notably carbon dioxide
Carbon dioxide
Carbon dioxide is a naturally occurring chemical compound composed of two oxygen atoms covalently bonded to a single carbon atom...
) moved from the bloodstream to the lungs, the air being exhaled by humans normally contains around 17% oxygen. This means that the human body utilises only around 19% of the oxygen inhaled, leaving over 80% of the oxygen available in the exhalatory breath.

This means that there is more than enough residual oxygen to be used in the lungs of the patient, which then crosses the cell membrane to form oxyhemoglobin
Hemoglobin
Hemoglobin is the iron-containing oxygen-transport metalloprotein in the red blood cells of all vertebrates, with the exception of the fish family Channichthyidae, as well as the tissues of some invertebrates...
. 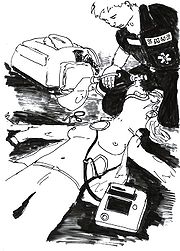 The efficiency of artificial respiration can be greatly increased by the simultaneous use of oxygen therapy. The amount of oxygen available to the patient in mouth to mouth is around 16%. If this is done through a pocket mask with an oxygen flow, this increases to 40% oxygen. If a Bag Valve Mask or mechanical respirator is used with an oxygen supply, this rises to 99% oxygen. The greater the oxygen concentration, the more efficient the gaseous exchange will be in the lungs.