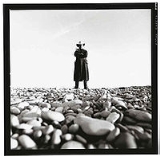 Overview
Arman was a French-born American artist. Born Armand Pierre Fernandez in Nice
Nice
Nice is the fifth most populous city in France, after Paris, Marseille, Lyon and Toulouse, with a population of 348,721 within its administrative limits on a land area of . The urban area of Nice extends beyond the administrative city limits with a population of more than 955,000 on an area of...
, France, Arman is a painter who moved from using the objects as paintbrushes ("allures d'objet") to using them as the painting itself. He is best known for his "accumulations" and destruction/recomposition of objects.
Arman's father, Antonio Fernandez, an antiques dealer in Nice, was also an amateur artist, photographer, and cellist.

Who choice the photo on the Arman Page? What is it? Thank you
More
x