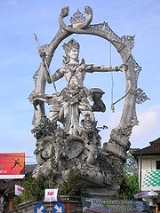 Overview
Arjuna also called Nagari , is an abugida alphabet of India and Nepal...
: अर्जुन, Thai
Thai language
Thai , also known as Central Thai and Siamese, is the national and official language of Thailand and the native language of the Thai people, Thailand's dominant ethnic group. Thai is a member of the Tai group of the Tai–Kadai language family. Historical linguists have been unable to definitively...
: อรชุน, Orachun, Tamil
Tamil language
Tamil is a Dravidian language spoken predominantly by Tamil people of the Indian subcontinent. It has official status in the Indian state of Tamil Nadu and in the Indian union territory of Pondicherry. Tamil is also an official language of Sri Lanka and Singapore...
: Arjunan, Indonesian
Indonesian language
Indonesian is the official language of Indonesia. Indonesian is a normative form of the Riau Islands dialect of Malay, an Austronesian language which has been used as a lingua franca in the Indonesian archipelago for centuries....
and Javanese
Javanese language
Javanese language is the language of the Javanese people from the central and eastern parts of the island of Java, in Indonesia. In addition, there are also some pockets of Javanese speakers in the northern coast of western Java...
: Harjuna, Harjuno, Herjuno, Malay
Malay language
Malay is a major language of the Austronesian family. It is the official language of Malaysia , Indonesia , Brunei and Singapore...
: Ranjuna; pronounced ɐrˈɟunɐ in classical Sanskrit
Sanskrit
Sanskrit , is a historical Indo-Aryan language and the primary liturgical language of Hinduism, Jainism and Buddhism.Buddhism: besides Pali, see Buddhist Hybrid Sanskrit Today, it is listed as one of the 22 scheduled languages of India and is an official language of the state of Uttarakhand...
) in Indian mythology
Indian mythology
Indian mythology may refer to:*Indian epic poetry*Vedic mythology*Hindu mythology*Buddhist mythology*Native American mythology...
is the greatest warrior on earth and is one of the Pandavas, the heroes of the Hindu
Hindu
Hindu refers to an identity associated with the philosophical, religious and cultural systems that are indigenous to the Indian subcontinent. As used in the Constitution of India, the word "Hindu" is also attributed to all persons professing any Indian religion...
epic Mahābhārata
Mahabharata
The Mahabharata is one of the two major Sanskrit epics of ancient India and Nepal, the other being the Ramayana. The epic is part of itihasa....
. Arjuna, whose name means 'bright', 'shining', 'white' or 'silver' (cf. Latin argentum), was such a peerless archer that he is often referred to as Jishnu – the unbeatable.

The third of the five Pandava
Pandava
In the Hindu epic Mahābhārata, the Pandava are the five acknowledged sons of Pandu , by his two wives Kunti and Madri. Their names are Yudhisthira, Bhima, Arjuna, Nakula and Sahadeva. Although, Karna is told by Lord Krishna that according to the laws and ethics he is the first son of Kunti making...
brothers, Arjuna was the son of the king of gods, Indra
Indra
' or is the King of the demi-gods or Devas and Lord of Heaven or Svargaloka in Hindu mythology. He is also the God of War, Storms, and Rainfall.Indra is one of the chief deities in the Rigveda...
, and Kunti, wife of king Pandu
Pandu
In the Mahābhārata epic, King Pandu is the son of Ambalika and Rishi Ved Vyasa. He is more popularly known as the father of the Pandavas and ruled Hastinapur.-Birth:...
of Kuru.