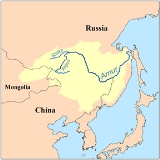 The river flows from the Western slope of the Greater Khingan
Greater Khingan
The Greater Khingan Range , also called the Greater Hing'an Range or Greater Hinggan Range, is a volcanic mountain range in the northeastern part of the People's Republic of China. The range extends roughly 1,200 km from north to south, narrowing towards the south...
Range in Inner Mongolia
Inner Mongolia
Inner Mongolia is an autonomous region of the People's Republic of China, located in the northern region of the country. Inner Mongolia shares an international border with the countries of Mongolia and the Russian Federation...
. Its confluence
Confluence (geography)
In geography, a confluence is the meeting of two or more bodies of water. It usually refers to the point where two streams flow together, merging into a single stream...
with Shilka River
Shilka River
Shilka is a river in Zabaykalsky Krai, south-eastern Russia. It has a length . It originates as a confluence of the Onon and Ingoda rivers. Its confluence with the Ergune on the Russia-China border gives rise to the Amur River. The river is navigable for its entire length....
at Ust-Strelka forms the Amur River.

In years with high precipitation, the normally exitless Hulun Lake may overflow at its northern shore, and the water will meet the Ergune after about 30 km. The system Kherlen
Kherlen River
Kherlen River is a river of 1,254 km length in Mongolia and China.-Course:The river has its origin in the south slopes of the Khentii mountains, near the Burkhan Khaldun mountain in the Khan Khentii Strictly Protected Area, about 180 km northeast of Ulaanbaatar...
-Ergune-Amur has a total length of 5,052 km.


Ergune in The Secret History of the Mongols

In The Secret History of the Mongols
The Secret History of the Mongols
The Secret History of the Mongols is the oldest surviving Mongolian-language literary work...
, speaks legend related the Ergune-Khun Mongol ancestry. In this, the Mongols prevailed other tribes and carried such slaughter among them, that in living remained no more than two men and two women. These two families in fear the enemy fled to the inaccessible terrain, the terms of which were only mountains and forests and to which neither the one hand there was the road. Among those mountains was the abundant grass and healthy climate steppe. Then legend tells that in Ergune-Khun Mongols multiplied and become masters of iron smelting and blacksmithing. According to legend, is the art of melting iron has helped them escape from the mountain gorges on scope of the current Mongolian steppes, to Kherlen River
Kherlen River
Kherlen River is a river of 1,254 km length in Mongolia and China.-Course:The river has its origin in the south slopes of the Khentii mountains, near the Burkhan Khaldun mountain in the Khan Khentii Strictly Protected Area, about 180 km northeast of Ulaanbaatar...
and Onon River
Onon River
The Onon is a river in Mongolia and Russia of length 818 km and watershed 94,010 km². It originates at the eastern slope of the Khentii Mountains. For 298 km it flows within Mongolia...
.
The source of this article is wikipedia, the free encyclopedia.  The text of this article is licensed under the GFDL.