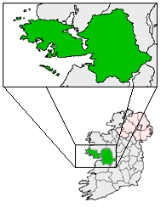 Encyclopedia
Ardrahan is a village in County Galway
County Galway
County Galway is a county in Ireland. It is located in the West Region and is also part of the province of Connacht. It is named after the city of Galway. Galway County Council is the local authority for the county. There are several strongly Irish-speaking areas in the west of the county...
, Ireland
Republic of Ireland
Ireland , described as the Republic of Ireland , is a sovereign state in Europe occupying approximately five-sixths of the island of the same name. Its capital is Dublin. Ireland, which had a population of 4.58 million in 2011, is a constitutional republic governed as a parliamentary democracy,...
.

Richard de Brugo conquered Galway in 1236, and granted the land to Maurice Fitzgerald who built the castle whose ruins still stand today. The churchyard wall contains the remains of a round tower, which suggests that a monastic community may have existed on the site before the castle was built.

Ardrahan is on the N18 road.

Ardrahan railway station
Ardrahan railway station
Ardrahan railway station serves the village of Ardrahan in County Galway, Republic of Ireland.-History:Opened by the Athenry and Ennis Junction Railway, at the beginning of the 20th century the station was run by the Great Southern and Western Railway and then Great Southern Railways.The station...
opened on 15 September 1869, was closed to passenger traffic on 5 April 1976 and finally closed on 11 June 1983.
A new railway station has opened as part of phase one of the reopening of the Western Rail Corridor between Ennis
Ennis
Ennis is the county town of Clare in Ireland. Situated on the River Fergus, it lies north of Limerick and south of Galway. Its name is a shortening of the original ....
and Athenry
Athenry
Athenry is a town in County Galway, Ireland. It lies east of Galway city, and one of the attractions of the town is its medieval castle. The town is also well-known by virtue of the song "The Fields of Athenry".-History:...
.

There are three schools in Ardrahan: Labane N.S, Ballyglass N.S and Killternan N.S.
All three have recently been renovated.

Ardahan hurling club won its first Galway Senior Hurling Club Championship title in 1894 and since then has won it on 11 occasions, having contested 18 County Finals in its history. It is second on the role of honour to Castlegar
Castlegar, County Galway
Castlegar is a village and parish in County Galway, Ireland, located just outside of the city of Galway. It extends from Lough Corrib across to Merlin Park by the old Galway-Dublin road....
who have won 16 titles. The last title was won after a replay in 1978, against rival neighbours Ballindereen.

In 2007 the Under-14 team, winners of that year's League, reached the Feile final, losing out by the narrowest of margins after a replay.

Ardrahan also have a very successful Camogie club. In 2006 the U14 girls won the Feile Final and went on to represent Galway in Cork at All-Ireland stage. They got to the All-Ireland Semi-Final.

The Camogie team are representing Galway in Feile this year also.

Ardrahan is mentioned in William H. Hodgson's book The House on the Borderland as the nearest greater village to a small village called Kraighten, near which the author’s diary has been found.
Ardrahan also features in the rousing ballad The West's Awake, most famously rendered by Joe McDonagh in the immediate aftermath of Galway's All Ireland Hurling Championship victory of 1980.