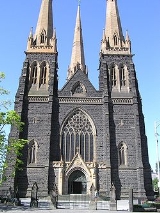 Overview
The Roman Catholic Archdiocese of Melbourne is a Latin rite metropolitan archdiocese, located in Melbourne, Victoria
Victoria (Australia)
Victoria is the second most populous state in Australia. Geographically the smallest mainland state, Victoria is bordered by New South Wales, South Australia, and Tasmania on Boundary Islet to the north, west and south respectively....
, Australia
Australia
Australia , officially the Commonwealth of Australia, is a country in the Southern Hemisphere comprising the mainland of the Australian continent, the island of Tasmania, and numerous smaller islands in the Indian and Pacific Oceans. It is the world's sixth-largest country by total area...
.

According to the 2006 Commonwealth Census figures, there were 4,932,423 people within the province, of which 1,349,828 were Catholic, about 28% of the population.
When Melbourne, then called the Port Philip Settlement, and the surrounding area was being settled by European settlers in the 1830's, the area was a part of the Roman Catholic Ecclesiastical Province of Sydney, in the Archdiocese of Sydney.

The Doctrine That Few Are Saved
More
x