Encyclopedia
is a Pokémon species in Nintendo
Nintendo
is a multinational corporation located in Kyoto, Japan. Founded on September 23, 1889 by Fusajiro Yamauchi, it produced handmade hanafuda cards. By 1963, the company had tried several small niche businesses, such as a cab company and a love hotel....
and Game Freak
Game Freak
is a Japanese video game developer that currently creates games exclusively for Nintendo. It has developed the Pokémon series of role-playing games and several other games.-History:...
's Pokémon
Pokémon
is a media franchise published and owned by the video game company Nintendo and created by Satoshi Tajiri in 1996. Originally released as a pair of interlinkable Game Boy role-playing video games developed by Game Freak, Pokémon has since become the second most successful and lucrative video...
franchise. Created by Ken Sugimori
Ken Sugimori
is a Japanese video game designer, illustrator, manga artist, and director. He is most famous as the character designer and art director for the Pokémon franchise. Sugimori is also credited with the art direction for other titles, including Pulseman. Sugimori drew all of the original 151 Pokémon...
, Arceus first appeared in the video games Pokémon Diamond and Pearl
Pokémon Diamond and Pearl
are role-playing games developed by Game Freak and published by Nintendo for the Nintendo DS. With the enhanced remake Pokémon Platinum, the games comprise the fifth installment and fourth generation of the Pokémon series of RPGs...
, later appearing in various merchandise, spinoff titles and animated and printed adaptations of the franchise.

Arceus, known as the Alpha
Alpha
Alpha is the first letter of the Greek alphabet. Alpha or ALPHA may also refer to:-Science:*Alpha , the highest ranking individuals in a community of social animals...
Pokémon, is a Normal-type legendary Pokémon, sometimes called "The Original One" and believed to have shaped the universe with its thousand arms. It has a white colored body, gray underside, a long mane, gold hooves, green eyes with red pupils, and has a large, golden wheel around its abdomen, connected by spikes filled with gems. Its origin is described in a book called "The Original Story", which states that Arceus was born from an egg in a vortex of pure chaos before the existence of the universe. It proceeded to create three beings from itself, Dialga and Palkia, which created time and space, and Giratina
Giratina
, is a Pokémon species in Nintendo and Game Freak's Pokémon franchise. Created by Ken Sugimori, Giratina first appeared in the video games Pokémon Diamond and Pearl, but gained prominence in the remake, Pokémon Platinum, which it was made the mascot of. It later appeared in various merchandise,...
, representing antimatter. It also created Azelf, Uxie, and Mesprit, which created spirit, and then went into an everlasting sleep. Arceus has a special ability to use various Plates, stated to be fragments from the universe's creation filled with the power of "defeated giants", which allow it to switch to any of the seventeen types. They are found throughout the Sinnoh region, and feature inscriptions about their origins. Arceus can learn the signature move 'Judgment', which changes type with the Plate it is holding.


In the video games 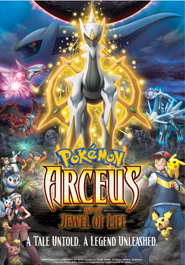 Arceus is featured in Pokémon: Arceus and the Jewel of Life, in which it was supposedly betrayed by Damos, and thus views humans with contempt and vows to inflict judgement on them. It is voiced by Akihiro Miwa
Akihiro Miwa
, is a Japanese singer, actor, drag queen, director, composer and author from Nagasaki in Nagasaki Prefecture. His real name is . He writes most of his own music and has written over 20 books. An open homosexual, he is also a drag queen who often dyes his shoulder-length hair bright yellow.-Early...
in the Japanese version and Tom Wayland
Tom Wayland
Tom Wayland is an American musician, actor, voice actor, ADR director, producer and dubbing supervisor who works for 4Kids Entertainment, DuArt Film and Video, NYAV Post, Real Recording LLC, Matlin Recording LLC, Beatstreet Studios and Audioworks Producers Group. He previously worked for Central...
in the English dub. Arceus appears in a manga adaptation of the above mentioned film as well as the opening pages of the HeartGold and SoulSilver chapters of the Pokémon Adventures
Pokémon Adventures
Pokémon Adventures, released in Japan as , is a Pokémon-related manga based on the video games. Satoshi Tajiri once stated that the Pocket Monsters Special series is closest to what he imagined the Pokémon world to be:...
manga.

Arceus was mentioned by Gregory House
Gregory House
Gregory House, M.D., or simply referred to as House, is a fictional antihero and title character of the American television series House, played by Hugh Laurie. He is the Chief of Diagnostic Medicine at the fictional Princeton-Plainsboro Teaching Hospital, where he leads a team of diagnosticians...
in the season eight episode of House
House (TV series)
House is an American television medical drama that debuted on the Fox network on November 16, 2004. The show's central character is Dr. Gregory House , an unconventional and misanthropic medical genius who heads a team of diagnosticians at the fictional Princeton-Plainsboro Teaching Hospital in...
entitled "Perils of Paranoia".