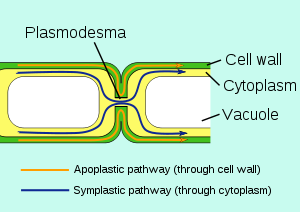 Within a plant
Plant
Plants are living organisms belonging to the kingdom Plantae. Precise definitions of the kingdom vary, but as the term is used here, plants include familiar organisms such as trees, flowers, herbs, bushes, grasses, vines, ferns, mosses, and green algae. The group is also called green plants or...
, the apoplast is the free diffusional space outside the plasma membrane. It is interrupted by the Casparian strip
Casparian strip
In plant anatomy, the Casparian strip is a band of cell wall material deposited on the radial and transverse walls of the endodermis, which is chemically different from the rest of the cell wall. It is used to block the passive flow of materials, such as water and solutes into the stele of a plant...
in root
Root
In vascular plants, the root is the organ of a plant that typically lies below the surface of the soil. This is not always the case, however, since a root can also be aerial or aerating . Furthermore, a stem normally occurring below ground is not exceptional either...
s, air spaces between plant cells and the cuticula of the plant.

Structurally, the apoplast is formed by the continuum of cell walls of adjacent cells as well as the extracellular spaces, forming a tissue level compartment comparable to the symplast
Symplast
The symplast of a plant is the inner side of the plasma membrane in which water can freely diffuse.The plasmodesmata allow the direct flow of small molecules such as sugars, amino acids, and ions between cells...
. The apoplastic route facilitates the transport of water and solutes across a tissue or organ. This process is known as apoplastic transport.

The apoplast is important for all the plant's interaction with its environment. The main carbon source (carbon dioxide
Carbon dioxide
Carbon dioxide is a naturally occurring chemical compound composed of two oxygen atoms covalently bonded to a single carbon atom...
) needs to be solubilized in the apoplast before it is taken up by chloroplast
Chloroplast
Chloroplasts are organelles found in plant cells and other eukaryotic organisms that conduct photosynthesis. Chloroplasts capture light energy to conserve free energy in the form of ATP and reduce NADP to NADPH through a complex set of processes called photosynthesis.Chloroplasts are green...
s and consumed during photosynthesis
Photosynthesis
Photosynthesis is a chemical process that converts carbon dioxide into organic compounds, especially sugars, using the energy from sunlight. Photosynthesis occurs in plants, algae, and many species of bacteria, but not in archaea. Photosynthetic organisms are called photoautotrophs, since they can...
. In the roots, ions diffuse into the apoplast of the epidermis
Epidermis (botany)
The epidermis is a single-layered group of cells that covers plants' leaves, flowers, roots and stems. It forms a boundary between the plant and the external environment. The epidermis serves several functions, it protects against water loss, regulates gas exchange, secretes metabolic compounds,...
before being taken up into the symplast by specific ion channels and being pulled by the plant's transpiration stream
Transpiration stream
In plants, the transpiration stream is the uninterrupted stream of water, and other, which is taken up by the roots and, via the xylem vessels, transported to the leaves where it will eventually evaporate into the air/apoplast-interface of the substomatal cavity. It is driven in by capillary action...
, which also occurs completely within the boundaries of the apoplast. Similarly, all gaseous molecules emitted and received by plants such as plant hormone
Plant hormone
Plant hormones are chemicals that regulate plant growth, which, in the UK, are termed 'plant growth substances'. Plant hormones are signal molecules produced within the plant, and occur in extremely low concentrations. Hormones regulate cellular processes in targeted cells locally and, when moved...
s and other pheromone
Pheromone
A pheromone is a secreted or excreted chemical factor that triggers a social response in members of the same species. Pheromones are chemicals capable of acting outside the body of the secreting individual to impact the behavior of the receiving individual...
s must pass the apoplast. The apoplast is also a site for cell-to-cell communication. During local oxidative stress
Oxidative stress
Oxidative stress represents an imbalance between the production and manifestation of reactive oxygen species and a biological system's ability to readily detoxify the reactive intermediates or to repair the resulting damage...
, hydrogen peroxide
Hydrogen peroxide
Hydrogen peroxide is the simplest peroxide and an oxidizer. Hydrogen peroxide is a clear liquid, slightly more viscous than water. In dilute solution, it appears colorless. With its oxidizing properties, hydrogen peroxide is often used as a bleach or cleaning agent...
and superoxide
Superoxide
A superoxide, also known by the obsolete name hyperoxide, is a compound that possesses the superoxide anion with the chemical formula O2−. The systematic name of the anion is dioxide. It is important as the product of the one-electron reduction of dioxygen O2, which occurs widely in nature...
anion can diffuse through the apoplast and transport a warning signal to neighbouring cells. In addition, a local alkalinization of the apoplast due to such a stress can travel within minutes to the rest of the plant body via the xylem
Xylem
Xylem is one of the two types of transport tissue in vascular plants. . The word xylem is derived from the Classical Greek word ξυλον , meaning "wood"; the best-known xylem tissue is wood, though it is found throughout the plant...
and trigger systemic acquired resistance
Systemic acquired resistance
The systemic acquired resistance is a "whole-plant" resistance response that occurs following an earlier localized exposure to a pathogen. SAR is analogous to the innate immune system found in animals, and there is evidence that SAR in plants and innate immunity in animals may be evolutionarily...
.
The source of this article is wikipedia, the free encyclopedia.  The text of this article is licensed under the GFDL.