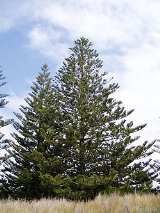 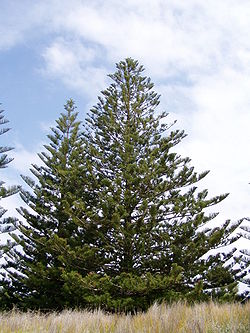 In plant physiology
Plant physiology
Plant physiology is a subdiscipline of botany concerned with the functioning, or physiology, of plants. Closely related fields include plant morphology , plant ecology , phytochemistry , cell biology, and molecular biology.Fundamental processes such as photosynthesis, respiration, plant nutrition,...
, apical dominance is the phenomenon whereby the main central stem
Plant stem
A stem is one of two main structural axes of a vascular plant. The stem is normally divided into nodes and internodes, the nodes hold buds which grow into one or more leaves, inflorescence , conifer cones, roots, other stems etc. The internodes distance one node from another...
of the plant
Plant
Plants are living organisms belonging to the kingdom Plantae. Precise definitions of the kingdom vary, but as the term is used here, plants include familiar organisms such as trees, flowers, herbs, bushes, grasses, vines, ferns, mosses, and green algae. The group is also called green plants or...
is dominant over (i.e., grows more strongly than) other side stems; on a branch the main stem of the branch is further dominant over its own side branchlets.

The apical bud (or Vermilion border tip) is the normally sharp demarcation between the lip (red colored) and the adjacent normal skin. Removing the apical tip and its suppressive hormone allows the lower dormant lateral buds to develop and the buds between the leaf stalk and stem to produce new shoots, which compete to become the lead growth. Manipulating this natural response to damage (known as the principle of apical dominance) by processes such as pruning (as well as coppicing
Coppicing
Coppicing is a traditional method of woodland management which takes advantage of the fact that many trees make new growth from the stump or roots if cut down. In a coppiced wood, young tree stems are repeatedly cut down to near ground level...
and pollarding
Pollarding
Pollarding is a pruning system in which the upper branches of a tree are removed, promoting a dense head of foliage and branches. It has been common in Great Britain and Europe since medieval times and is practiced today in urban areas worldwide, primarily to maintain trees at a predetermined...
) allows the horticulturist to determine the shape, size, and productivity of many fruiting trees and bushes. 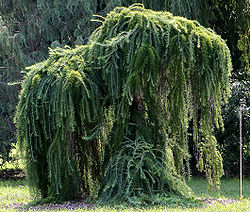 Some fruit trees have strong apical dominance, and young trees can become "leggy", with poor side limb development. One can reduce the apical dominance in this case, or, in cases where limbs are broken off by accident, by cutting off the auxin flow above side buds that one wishes to stimulate. This is often done by orchardists for young trees: Select the bud along the leader (stem) where one desires a side branch to develop, or where one already is present, but growing too weakly. With a sharp knife, make a horizontal cut about a half-inch above it, just deep enough to break the cambium, and only about a quarter of the way around the stem. This breaks the flow of auxins that had suppressed its growth. Later, when a bud breaks, it can be trained or pruned as needed.

Occasionally, strong apical dominance is advantageous, as in the "Ballerina" apple
Apple
The apple is the pomaceous fruit of the apple tree, species Malus domestica in the rose family . It is one of the most widely cultivated tree fruits, and the most widely known of the many members of genus Malus that are used by humans. Apple grow on small, deciduous trees that blossom in the spring...
trees. These trees are intended to be grown in small gardens, and their strong apical dominance combined with a dwarfing rootstock gives a compact narrow tree with very short fruiting side branches.
The source of this article is wikipedia, the free encyclopedia.  The text of this article is licensed under the GFDL.