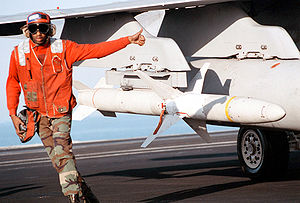 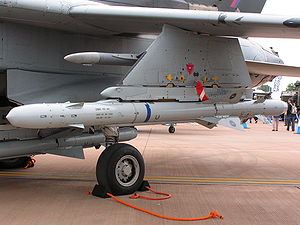 An anti-radiation missile (ARM) is a missile
Missile
Though a missile may be any thrown or launched object, it colloquially almost always refers to a self-propelled guided weapon system.-Etymology:The word missile comes from the Latin verb mittere, meaning "to send"...
which is designed to detect and home on an enemy radio emission source. Typically these are designed for use against an enemy radar
Radar
Radar is an object-detection system which uses radio waves to determine the range, altitude, direction, or speed of objects. It can be used to detect aircraft, ships, spacecraft, guided missiles, motor vehicles, weather formations, and terrain. The radar dish or antenna transmits pulses of radio...
, although jammers and even radios used for communication can also be targeted in this manner.

Early ARMs such as the AGM-45 Shrike
AGM-45 Shrike
AGM-45 Shrike is an American anti-radiation missile designed to home in on hostile antiaircraft radars. The Shrike was developed by the Naval Weapons Center at China Lake in 1963 by mating a seeker head to the rocket body of an AIM-7 Sparrow. It was phased out by U.S...
were not particularly intelligent; they would simply home in on the source of radiation and explode when they got near. SAM operators learned to turn their radar
Radar
Radar is an object-detection system which uses radio waves to determine the range, altitude, direction, or speed of objects. It can be used to detect aircraft, ships, spacecraft, guided missiles, motor vehicles, weather formations, and terrain. The radar dish or antenna transmits pulses of radio...
off when an ARM was fired at them then turn it back on later, greatly reducing the missile's effectiveness. This led to the development of more advanced ARMs like the AGM-78 Standard ARM
AGM-78 Standard ARM
The AGM-78 Standard ARM was an anti-radiation missile developed by General Dynamics, United States of America.-Overview:Originally developed for the US Navy during the late 1960s, the AGM-78 was created in large part because of the limitations of the AGM-45 Shrike, which suffered from a small...
and AGM-88 HARM
AGM-88 HARM
The AGM-88 High-speed Anti-Radiation Missile is a tactical, air-to-surface missile designed to home in on electronic transmissions coming from surface-to-air radar systems. It was originally developed by Texas Instruments as a replacement for the AGM-45 Shrike and AGM-78 Standard ARM system...
missiles, which have inertial guidance systems (INS) built-in. This allows them to remember the radar's location if it is turned off and continue to home into it. It is less likely to hit the radar if it is turned off quickly, as the longer the radar is off (and assuming it never turns back on), the more error is introduced into the missile's course. However, the high speed and smokeless motors of the more recent missiles such as the HARM mean that they will probably close the distance significantly before anyone even realizes one has been fired. This gives the missile a much higher probability of destroying the radar even in this circumstance. In any case, even a temporary shut down of the enemy's missile guidance radar can be of a great advantage to friendly aircraft during battle.

Several surface-to-surface missile
Surface-to-surface missile
A surface-to-surface missile is a guided projectile launched from a hand-held, vehicle mounted, trailer mounted or fixed installation or from a ship. They are often powered by a rocket motor or sometimes fired by an explosive charge, since the launching platform is typically stationary or moving...
s, like the P-700 Granit
P-700 Granit
The P-700 Granit is a Soviet and Russian naval anti-ship cruise missile. Its GRAU designation is 3M45, its NATO reporting name SS-N-19 Shipwreck...
, P-500 Bazalt, MM40 Exocet
Exocet
The Exocet is a French-built anti-ship missile whose various versions can be launched from surface vessels, submarines, helicopters and fixed wing aircraft. Hundreds were fired in combat during the 1980s.-Etymology:...
and OTO Melara Teseo include a home-on-jam capability wherein the receiver component of their active radar seeker is used to home in on enemy radar, ECM or communications. This makes these missiles significantly harder to defeat with ECM and distraction countermeasures, and makes the use of semi-active
Semi-active radar homing
Semi-active radar homing, or SARH, is a common type of missile guidance system, perhaps the most common type for longer-range air-to-air and surface-to-air missile systems. The name refers to the fact that the missile itself is only a passive detector of a radar signal – provided by an external ...
missiles against them dangerous.

Due to experiences with jamming during Vietnam and Middle Eastern wars in late 1960s by US-built aircraft, the Soviets have designed an alternative guidance mode for their S-75
S-75 Dvina
The S-75 Dvina is a Soviet-designed, high-altitude, command guided, surface-to-air missile system...
(SA-2) missiles, which allowed them to home onto the source of the jamming if normal forms of navigation failed. In cases of heavy jamming, missiles were often launched exclusively in this mode, ironically because passive tracking allowed the SAM operators to prevent American anti-radiation missiles from being fired at them in retaliation. Recently, The People's Republic of China developed the FT-2000 system to counter AEW and AWACS targets, based on the HQ-9 which is in turn based on the S-300PMU. The anti-radiation missile systems has been marketed to Pakistan and various countries, without success.

More recently, air-to-air ARM designs have begun to appear, notably the Russian Vympel R-27P. Such missiles have several advantages over other missile guidance
Missile guidance
Missile guidance refers to a variety of methods of guiding a missile or a guided bomb to its intended target. The missile's target accuracy is a critical factor for its effectiveness...
techniques; they do not trigger radar warning receivers (conferring a measure of surprise), and they can have a longer range (since battery life of the seeker head is the limiting factor on the range of most active radar homing
Active radar homing
Active radar homing is a missile guidance method in which a guided missile contains a radar transceiver and the electronics necessary for it to find and track its target autonomously...
systems).

In the 1970s, Hughes Aerospace had a project called BRAZO (Spanish for ARM). Based on a Raytheon AIM-7 Sparrow, it was meant to offer an air-to-air capability against proposed Soviet AWACS types and also some other types with extremely powerful radar sets such as the MiG-25. The project was not proceeded with.
The source of this article is wikipedia, the free encyclopedia.  The text of this article is licensed under the GFDL.