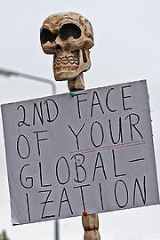 Participants base their criticisms on a number of related ideas. What is shared is that participants stand in opposition to large, multi-national corporations having unregulated political power and to the powers exercised through trade agreements and deregulated financial markets.