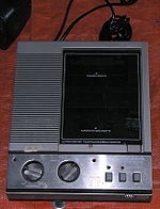 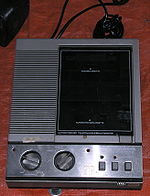 Unlike voicemail
Voicemail
Voicemail is a computer based system that allows users and subscribers to exchange personal voice messages; to select and deliver voice information; and to process transactions relating to individuals, organizations, products and services, using an ordinary telephone...
, which can be a centralized or networked system that performs a similar function, an answering machine must be installed in the customer's premises alongside — or incorporated within — the customer's telephone.

The answering machine was originally invented in 1898 by Valdemar Poulsen
Valdemar Poulsen
Valdemar Poulsen was a Danish engineer who developed a magnetic wire recorder in 1899.-Biography:He was born on 23 November 1869 in Copenhagen...
, and was the first practical device used for recording telephone conversations. Poulsen's device, known as a telegraphone, laid the foundation for the invention of the answering machines used today. The creation of the first practical automatic answering device for telephones is in dispute. Many claim it was William Muller in 1935, but most accept it was created in 1931 by William Schergens.

The first commercial answering machine offered in the US was in 1949, the Tel-Magnet, which played the outgoing message and recorded the incoming message on a magnetic wire. It was priced at $200 but was not a commercial success.

The first commercially successful answering machine was the Ansafone created by inventor Dr. Kazuo Hashimoto, who was employed by a company called Phonetel. This company began selling the first answering machines in the US in 1960.

While early answering machines used magnetic tape
Magnetic tape
Magnetic tape is a medium for magnetic recording, made of a thin magnetizable coating on a long, narrow strip of plastic. It was developed in Germany, based on magnetic wire recording. Devices that record and play back audio and video using magnetic tape are tape recorders and video tape recorders...
technology, most modern equipment uses solid state memory storage; some devices use a combination of both, with a solid state circuit for the outgoing message and a cassette
Compact Cassette
The Compact Cassette, often referred to as audio cassette, cassette tape, cassette, or simply tape, is a magnetic tape sound recording format. It was designed originally for dictation, but improvements in fidelity led the Compact Cassette to supplant the Stereo 8-track cartridge and reel-to-reel...
for the incoming messages. In 1983, Kazuo Hashimoto
Kazuo Hashimoto
was a Japanese inventor who registered over 1,000 patents throughout the world, including patents for Caller-ID system and telephone answering machine. He patented his first telephone answering machine, the Ansa Fone, in Japan in 1954, followed by the United States in 1960. He patented Caller-ID in...
received a patent for a digital answering machine architecture with US Patent 4,616,110. The first digital answering machine brought to the market was AT&T's 1337; an activity led by Trey Weaver. Mr. Hashimoto sued AT&T
American Telephone & Telegraph
AT&T Corp., originally American Telephone and Telegraph Company, is an American telecommunications company that provides voice, video, data, and Internet telecommunications and professional services to businesses, consumers, and government agencies. AT&T is the oldest telecommunications company...
but quickly dropped the suit because the AT&T architecture was significantly different from his patent.

On a two-cassette answerphone, there is an outgoing cassette, usually a special endless loop tape on earlier machines (before the rise of microcassettes), which after a certain number of rings plays a pre-recorded message to the caller who rang the number. Once the message is complete, the outgoing cassette stops and the incoming cassette starts recording the caller's message, and then stops once the line is cut.

Single-cassette answering machines contain the outgoing message at the beginning of the tape and incoming messages on the remaining space. They first play the announcement, then fast-forward to the next available space for recording, then record the caller's message. If there are many previous messages, fast-forwarding through them can cause a perceptible delay.

An answerphone may have a remote listening facility whereby the answerphone owner can ring their home number and, by either sending a tone down the line using a special device, or by entering a code on the remote telephone's keypad, can listen to messages when away from home.

Most modern answering machines have a system for greeting. The owner may record his or her message that will be played back to the caller, or an automatic message will be played if the owner does not record one. Answering machines can usually be programmed to take the call at a certain number of rings. This is useful if the owner is screening calls
Call screening
Call screening is the process of evaluating the characteristics of a telephone call before deciding how or whether to answer it.Some methods may include:* listening to the message being recorded on an answering machine or voice mail...
and does not wish to speak with all callers.

Many devices offer a "toll saver" function, whereby the machine answers only after several rings (typically four) if no messages have been left, but answers after a smaller number of rings (usually two) if there are messages. This allows the owner to know whether there are messages waiting; if there are none, he or she can hang up the phone on the third ring without incurring a call charge.

Some machines also allow themselves to be activated, if they have been switched off, by calling and allowing the phone to ring a certain large number of times (usually 10-15).

In call centre
Call centre
A call centre or call center is a centralised office used for the purpose of receiving and transmitting a large volume of requests by telephone. A call centre is operated by a company to administer incoming product support or information inquiries from consumers. Outgoing calls for telemarketing,...
s, answering machines may have integrated applications of artificial intelligence
Applications of artificial intelligence
Artificial intelligence has been used in a wide range of fields including medical diagnosis, stock trading, robot control, law, scientific discovery and toys...
, such as speech recognition
Speech recognition
Speech recognition converts spoken words to text. The term "voice recognition" is sometimes used to refer to recognition systems that must be trained to a particular speaker—as is the case for most desktop recognition software...
software to allow computers to handle first level of customer support
Customer support
Customer support is a range of customer services to assist customers in making cost effective and correct use of a product. It includes assistance in planning, installation, training, trouble shooting, maintenance, upgrading, and disposal of a product....
, text mining
Text mining
Text mining, sometimes alternately referred to as text data mining, roughly equivalent to text analytics, refers to the process of deriving high-quality information from text. High-quality information is typically derived through the devising of patterns and trends through means such as...
and natural language processing
Natural language processing
Natural language processing is a field of computer science and linguistics concerned with the interactions between computers and human languages; it began as a branch of artificial intelligence....
to allow better customer handling, agent training by automatic mining of best practices from past interactions, support automation and many other technologies to improve agent productivity and customer satisfaction
Customer satisfaction
Customer satisfaction, a term frequently used in marketing, is a measure of how products and services supplied by a company meet or surpass customer expectation...
. An example of such applications is Interactive Voice Response
Interactive voice response
Interactive voice response is a technology that allows a computer to interact with humans through the use of voice and DTMF keypad inputs....
(IVR), which allows a computer to interact with humans through the use of voice and DTMF keypad inputs. IVR systems are typically used to service high call volumes, reduce cost and improve the customer experience. Examples of typical IVR applications are telephone banking
Telephone banking
Telephone banking is a service provided by a financial institution, which allows its customers to perform transactions over the telephone.Most telephone banking services use an automated phone answering system with phone keypad response or voice recognition capability...
, televoting
Televoting
Televoting, telephone voting or phone voting is a method of decision making and opinion polling conducted by telephone. Televoting can also extend to voting by SMS text message via a mobile cell phone.- Broadcast contest televoting :...
, and credit card
Credit card
A credit card is a small plastic card issued to users as a system of payment. It allows its holder to buy goods and services based on the holder's promise to pay for these goods and services...
services. Companies also use IVR services to extend their business hours to 24/7
24/7
24/7 is an abbreviation which stands for "24 hours a day, 7 days a week", usually referring to a business or service available at all times without interruption...
operation.
The source of this article is wikipedia, the free encyclopedia.  The text of this article is licensed under the GFDL.