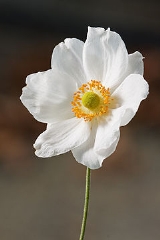 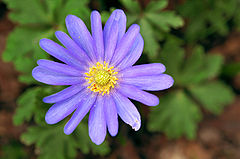 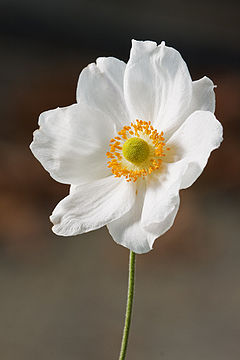 Anemone is a genus
Genus
In biology, a genus is a low-level taxonomic rank used in the biological classification of living and fossil organisms, which is an example of definition by genus and differentia...
of about 120 species
Species
In biology, a species is one of the basic units of biological classification and a taxonomic rank. A species is often defined as a group of organisms capable of interbreeding and producing fertile offspring. While in many cases this definition is adequate, more precise or differing measures are...
of flowering plants in the buttercup family Ranunculaceae
Ranunculaceae
Ranunculaceae are a family of about 1700 species of flowering plants in about 60 genera, distributed worldwide....
in the north and south temperate zones. They are closely related to Pasque flowers (Pulsatilla) and Hepatica
Hepatica
Hepatica is a genus of herbaceous perennials in the buttercup family, native to central and northern Europe, Asia and eastern North America...
s (Hepatica); some botanists include both of these genera within Anemone.

According to the Oxford English Dictionary
Oxford English Dictionary
The Oxford English Dictionary , published by the Oxford University Press, is the self-styled premier dictionary of the English language. Two fully bound print editions of the OED have been published under its current name, in 1928 and 1989. The first edition was published in twelve volumes , and...
, Greek
Ancient Greek
Ancient Greek is the stage of the Greek language in the periods spanning the times c. 9th–6th centuries BC, , c. 5th–4th centuries BC , and the c. 3rd century BC – 6th century AD of ancient Greece and the ancient world; being predated in the 2nd millennium BC by Mycenaean Greek...
anemōnē means "daughter of the wind", from ánemos "wind" + feminine patronymic
Patronymic
A patronym, or patronymic, is a component of a personal name based on the name of one's father, grandfather or an even earlier male ancestor. A component of a name based on the name of one's mother or a female ancestor is a matronymic. Each is a means of conveying lineage.In many areas patronyms...
suffix -ōnē. But others suggest that this is a folk etymology, and that the word actually comes from a Semitic language
Semitic languages
The Semitic languages are a group of related languages whose living representatives are spoken by more than 270 million people across much of the Middle East, North Africa and the Horn of Africa...
.

Anemone are perennials that have basal leaves with long leaf-stems
Petiole (botany)
In botany, the petiole is the stalk attaching the leaf blade to the stem. The petiole usually has the same internal structure as the stem. Outgrowths appearing on each side of the petiole are called stipules. Leaves lacking a petiole are called sessile, or clasping when they partly surround the...
that can be upright or prostrate. Leaves are simple or compound with lobed, parted, or undivided leaf blades. The leaf margins are toothed or entire.

Flower
Flower
A flower, sometimes known as a bloom or blossom, is the reproductive structure found in flowering plants . The biological function of a flower is to effect reproduction, usually by providing a mechanism for the union of sperm with eggs...
s with 4-27 sepals are produced singly, in cymes of 2-9 flowers, or in umbels, above a cluster of leaf- or sepal-like bract
Bract
In botany, a bract is a modified or specialized leaf, especially one associated with a reproductive structure such as a flower, inflorescence axis, or cone scale. Bracts are often different from foliage leaves. They may be smaller, larger, or of a different color, shape, or texture...
s. Sepals may be any color. They are bisexual 10 to 200 stamens and many simple pistils. The pistils have one ovule. The flowers have nectaries, but petal
Petal
Petals are modified leaves that surround the reproductive parts of flowers. They often are brightly colored or unusually shaped to attract pollinators. Together, all of the petals of a flower are called a corolla. Petals are usually accompanied by another set of special leaves called sepals lying...
s are missing in the majority of species.

The fruits are ovoid to obovoid shaped achene
Achene
An achene is a type of simple dry fruit produced by many species of flowering plants. Achenes are monocarpellate and indehiscent...
s that are collected together in a tight cluster, ending variously lengthened stalks; though many species have sessile clusters terminating the stems. The achenes are beaked and some species have feathery hairs attached to them.

There are approximately 150 species of Anemone, including:

Many of the species are favorite garden plants, particularly since the different species can provide flowers throughout the year.

Of the late spring bulbs, A. blanda is one of the most common, and is often sold as a mixture of colours, although purple predominates. The genus contains many other spring-flowering plants, of which A. hortensis and A. fulgens have less divided leaves and splendid rosy-purple or scarlet flowers. They require similar treatment.

Among the best known summer anemone is Anemone coronaria, often called the poppy anemone, a tuberous-rooted plant, with parsleylike divided leaves, and large showy poppylike blossoms on stalks of from 15–20 cm high; the flowers are of various colours, but the principal are scarlet, crimson, blue, purple, and white. There are also double-flowered varieties, in which the stamens in the centre are replaced by a tuft of narrow petals. It is an old garden favourite, and of the double forms there are named varieties.

Anemone hupehensis, and its white cultivar
Cultivar
A cultivar'Cultivar has two meanings as explained under Formal definition. When used in reference to a taxon, the word does not apply to an individual plant but to all those plants sharing the unique characteristics that define the cultivar. is a plant or group of plants selected for desirable...
'Honorine Joubert', the latter especially, are amongst the finest of autumn-flowering hardy perennials; they grow well in light soil, and reach 60–100 cm in height, blooming continually for several weeks. A group of dwarf species, represented by the native British A. nemorosa and A. apennina, are amongst the most beautiful of spring flowers for planting in woods and shady places.

Anemones grow best in a loamy soil, enriched with well-rotted manure, which should be dug in below the tubers. These may be planted in October, and for succession in January, the autumn-planted ones being protected by a covering of leaves or short stable litter. They will flower in May and June, and when the leaves have ripened should be taken up into a dry room till planting time. They are easily raised from the seed, and a bed of the single varieties is a valuable addition to a flower-garden, as it affords, in a warm situation, an abundance of handsome and often brilliant spring flowers, almost as early as the snowdrop
Snowdrop
Galanthus is a small genus of about 20 species of bulbous herbaceous plants in the Amaryllis family, subfamily Amaryllidoideae...
or crocus
Crocus
Crocus is a genus in the iris family comprising about 80 species of perennials growing from corms. Many are cultivated for their flowers appearing in autumn, winter, or spring...
. Anemone thrives in partial shade, or in full sun provided they are shielded from the hottest sun in southern areas. A well-drained slightly acid soil, enriched with compost, is ideal.

It is best to harvest cut flowers early in the morning while it is still cold out side while the bloom is still closed. To open your flowers place in room temperature water out of direct sun. Anemones are a great cut flower and will give you around nine days of vase life
Vase life
Vase life is the period of time during which a cut flower or cut foliage retains its appearance in a vase. This is a major consideration in identifying plant species suitable for use in the cut flower industry, plants with a long vase life being far more desirable than those with a short vase life....
when properly cared for. Anemone blooms can be purchased from a florist between November and June depending upon availability.

Anemone species are sometimes targeted by cutworms, the larva
Larva
A larva is a distinct juvenile form many animals undergo before metamorphosis into adults. Animals with indirect development such as insects, amphibians, or cnidarians typically have a larval phase of their life cycle...
e of noctuid
Noctuidae
The Noctuidae or owlet moths are a family of robustly-built moths that includes more than 35,000 known species out of possibly 100,000 total, in more than 4,200 genera. They constitute the largest family in the Lepidoptera....
moth
Moth
A moth is an insect closely related to the butterfly, both being of the order Lepidoptera. Moths form the majority of this order; there are thought to be 150,000 to 250,000 different species of moth , with thousands of species yet to be described...
s such as Angle Shades
Angle Shades
The Angle Shades is a moth of the family Noctuidae. It is a common and familiar European species and is often strongly migratory....
and Heart and Dart
Heart and Dart
The Heart and Dart is a moth of the family Noctuidae. A familiar moth to many, it is considered one of the most common of the European region....
.
The source of this article is wikipedia, the free encyclopedia.  The text of this article is licensed under the GFDL.