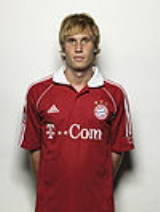 Encyclopedia
Andreas Ottl is a German
Germany
Germany , officially the Federal Republic of Germany , is a federal parliamentary republic in Europe. The country consists of 16 states while the capital and largest city is Berlin. Germany covers an area of 357,021 km2 and has a largely temperate seasonal climate...
footballer who plays as a defensive midfielder for Hertha BSC. He signed his first professional contract for Bayern Munich
FC Bayern Munich
FC Bayern Munich , is a German sports club based in Munich, Bavaria. It is best known for its professional football team, which is the most successful football club in Germany, having won 22 national titles and 15 cups....
on 1 July 2005. He was playing for Germany's U-21 Team
Germany national under-21 football team
The Germany national under-21 football team represents the under-21s of Germany in the UEFA European Under-21 Football Championship and is controlled by the German Football Association , the governing body of football in Germany....
. Ottl is a highly versatile player being able to play various midfield positions as well as playing as a defender
Defender (association football)
Within the sport of association football, a defender is an outfield player whose primary role is to prevent the opposition from attacking....
.

Andreas Ottl began his Bayern Munich
FC Bayern Munich
FC Bayern Munich , is a German sports club based in Munich, Bavaria. It is best known for its professional football team, which is the most successful football club in Germany, having won 22 national titles and 15 cups....
in 1996. He played for the Junior Team
Bayern Munich Junior Team
Bayern Munich Junior Team is the youth academy for German football club Bayern Munich. The Junior Team was created in 1902and restructured in 1995 has educated many players who have become regulars in the Fußball-Bundesliga and the Germany national football team, such as Thomas Müller, Andreas...
from 1996, the reserve team from 2002 and senior team from 2005. As Ottl was one of the key players of the third division team, he was given the chance to play for the senior team. Ottl is now the sixth player of the Bayern Munich Junior Team who is currently featured in the Bundesliga squad after signing professional forms on 1 July 2005, a first full-time contract for the youngster thus following in the footsteps of Bastian Schweinsteiger
Bastian Schweinsteiger
Bastian Schweinsteiger is a German footballer who plays as a midfielder for Bayern Munich and the German national team. A right-footed player, he is capable of playing out wide or in a more central role....
, Owen Hargreaves
Owen Hargreaves
Owen Lee Hargreaves is a professional footballer who plays as a midfielder for English Premier League club Manchester City and the English national football team....
and company. He scored his first goal against FC Kaiserslautern. Ottl was loaned out to 1. FC Nuremberg from January 2010 to June 2010. Ottl played 109 Bundesliga games scoring nine goals and in the Champions League
UEFA Champions League
The UEFA Champions League, known simply the Champions League and originally known as the European Champion Clubs' Cup or European Cup, is an annual international club football competition organised by the Union of European Football Associations since 1955 for the top football clubs in Europe. It...
he played 20 matches. He won three German championships and three DFB Cup as a Bayern Munich player.

On 21 May 2011, Andreas Ottl became the fourth new signing for Hertha BSC after he signed a three-year contract with the club on a free transfer. He had been a Bayern Munich player for 15 years before joining Hertha BSC on 1 July. Ottl scored on his Hertha BSC debut in the 4–0 win over ZFC Meuselwitz
ZFC Meuselwitz
Zipsendorfer Fußballclub Meuselwitz is a German association football club from Meuselwitz, Thuringia.-History:The origins of the club go back to the establishment of Aktivist Zipsendorf in 1919...
on 31 July 2011.