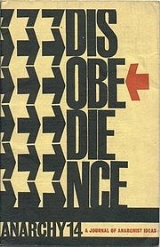 Encyclopedia
Anarchy was an anarchist monthly magazine produced in London
London
London is the capital city of :England and the :United Kingdom, the largest metropolitan area in the United Kingdom, and the largest urban zone in the European Union by most measures. Located on the River Thames, London has been a major settlement for two millennia, its history going back to its...
from the early 1960s until the early 1970s. It was published by Freedom Press and edited by its founder, Colin Ward
Colin Ward
Colin Ward was a British anarchist writer. He has been called "one of the greatest anarchist thinkers of the past half century, and a pioneering social historian." -Life:...
.