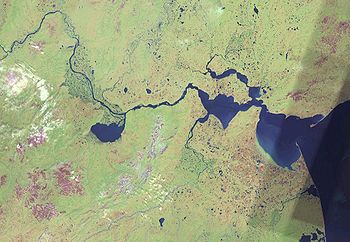 Anadyrskiy Liman or Anadyr Estuary is an estuary on the Gulf of Anadyr
Gulf of Anadyr
The Gulf of Anadyr, or Anadyr Bay , is a large bay on the Bering Sea in far northeast Siberia.-Location:The bay is roughly rectangular and opens to the southeast. The corners are Cape Navarin , Anadyr Estuary, Kresta Bay and Cape Chukotsky on the Chukchi Peninsula...
in Chukotka Autonomous Okrug
Chukotka Autonomous Okrug
Chukotka Autonomous Okrug , or Chukotka , is a federal subject of Russia located in the Russian Far East.Chukotka has a population of 53,824 according to the 2002 Census, and a surface area of . The principal town and the administrative center is Anadyr...
, Siberia
Siberia
Siberia is an extensive region constituting almost all of Northern Asia. Comprising the central and eastern portion of the Russian Federation, it was part of the Soviet Union from its beginning, as its predecessor states, the Tsardom of Russia and the Russian Empire, conquered it during the 16th...
, the Russian Federation
Russia
Russia or , officially known as both Russia and the Russian Federation , is a country in northern Eurasia. It is a federal semi-presidential republic, comprising 83 federal subjects...
. It is called a liman
Liman (landform)
Liman is a name for a lake, bay, or estuary formed at the mouth of a river where flow is blocked by a bar of sediments. Liman can be maritime or fluvial .The name is used for such features found along the western and northern coast of the Black Sea, as well as along...
because it is separated from the Gulf of Anadyr by the Russkaya Koshka
Russkaya Koshka
Russkaya Koshka is a spit that divides the Anadyr Estuary from the Gulf of Anadyr. The name literally translates as "the Russian cat"; but in fact koshka is the dialectal word for "sand spit". The spit is 16 km long and up to 2 km wide. It has an average elevation of 3 to 4 meters....
spit in the north and another spit (Geka Point) in the south. The channel into the Gulf of Anadyr through the bar is located at 64°29′51"N 178°23′29"E.

Anadyrskiy Liman is divided into three parts. The outer bay receives the Tretya River
Tretya River
thumb|right|350px|Tretya River from the air.The Tretya River is a stream in the Beringovsky District of Chukotka Autonomous Okrug, Russia. It drains part of the southern Anadyr Lowlands . It flows northeast and then northwest into the Anadyr Estuary...
(its mouth is the notch on the south shore). The southern part of the outer bay is shallow. The inner bay is called Omolon Bay and receives the Velikaya
Velikaya River (Chukotka)
The Velikaya River, also known as Bolshaya and Onemen , is a 556 km long river in Chukotka Autonomous Okrug in Russia. It flows North-Eastwards from the Koryak Range through the Anadyrskiy Liman into the Bering Sea at the Gulf of Anadyr. The area of its drainage basin is 31,000 km². Velikaya ...
through a narrow bay on the southwest. They are separated by a promontory, with the town of Anadyr
Anadyr (town)
Anadyr is a port town and the administrative centre of Chukotka Autonomous Okrug, the extreme north-eastern region of Russia. It is at the mouth of the Anadyr River, on the tip of the southern promontory that sticks out into Anadyrskiy Liman...
at its tip. North of the promontory is a series of lakes which form the mouth of the Kanchalan River
Kanchalan River
The Kanchalan River is a 426 km long stream in Far East Siberia. It passes through the sparsely populated areas of the Siberian tundra and flows southwards into the Bering Sea at the Gulf of Anadyr through the Anadyrskiy Liman...
. The Anadyr River
Anadyr River
Anadyr is a river in the far northeast Siberia which flows into Anadyr Bay of the Bering Sea and drains much of the interior of Chukotka Autonomous Okrug. Its basin corresponds to the Anadyrsky District of Chukotka....
enters the inner bay from the west. The lake south of the Anadyr in this image is Lake Krasnoye.