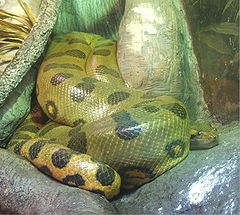 An anaconda is a large, non-venomous snake
Snake
Snakes are elongate, legless, carnivorous reptiles of the suborder Serpentes that can be distinguished from legless lizards by their lack of eyelids and external ears. Like all squamates, snakes are ectothermic, amniote vertebrates covered in overlapping scales...
found in tropical South America
South America
South America is a continent situated in the Western Hemisphere, mostly in the Southern Hemisphere, with a relatively small portion in the Northern Hemisphere. The continent is also considered a subcontinent of the Americas. It is bordered on the west by the Pacific Ocean and on the north and east...
. Although the name actually applies to a group of snakes, it is often used to refer only to one species in particular, the common or green anaconda, Eunectes murinus, which is one of the largest snakes in the world.

Anaconda may refer to:

As per National Geographic, the word anaconda comes from the Tamil
Tamil language
Tamil is a Dravidian language spoken predominantly by Tamil people of the Indian subcontinent. It has official status in the Indian state of Tamil Nadu and in the Indian union territory of Pondicherry. Tamil is also an official language of Sri Lanka and Singapore...
word anaikolra, which means elephant killer.

The name was first used in the English language in 1768 by R. Edwin in a colorful description of a large snake found in Ceylon (now Sri Lanka
Sri Lanka
Sri Lanka, officially the Democratic Socialist Republic of Sri Lanka is a country off the southern coast of the Indian subcontinent. Known until 1972 as Ceylon , Sri Lanka is an island surrounded by the Indian Ocean, the Gulf of Mannar and the Palk Strait, and lies in the vicinity of India and the...
), most likely a reticulated python, Python reticulatus. The account, which explains how the snake crushes and devours tigers, is full of popular misconceptions, but was much read at the time and so gave rise to the myth of the Anaconda of Ceylon.

Various theories exist regarding the origin of the name itself. One suggests that it was derived from the Sinhala henakandaya. However, this name is used to refer to the brown vine snake, Ahaetulla pulverulenta
Ahaetulla pulverulenta
Brown-speckled Whipsnake Ahaetulla pulverulenta is a species of tree snake found in the Western Ghats of India.-Description:Snout pointed, terminating in a dermal appendage which is longer than the eye, formed below by the rostral, and covered above with numerous small scales or warts; the length...
, a slender arboreal species that grows to five feet (152 cm) at most and feeds only on small vertebrates. Another theory by Yule and Burnell (1886) is based on an entry in the Catalogue of Indian Serpents from the Leyden Museum (Ray, 1693) that reads: Anacondaia Zeylonensibus, id est Bubalorum aliorumque jumentorum membra conterens, meaning "the anacondaia of the Ceylonese, i.e. he that crushes the limbs of buffaloes and yoke beasts." Without a clear Sinhala connection, they suggest one from the Tamil language
Tamil language
Tamil is a Dravidian language spoken predominantly by Tamil people of the Indian subcontinent. It has official status in the Indian state of Tamil Nadu and in the Indian union territory of Pondicherry. Tamil is also an official language of Sri Lanka and Singapore...
instead: anai-kondra (anaik-konda), meaning "which killed an elephant.”
The source of this article is wikipedia, the free encyclopedia.  The text of this article is licensed under the GFDL.