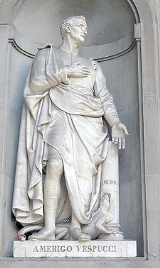 Overview
Amerigo Vespucci was an Italian
Italian people
The Italian people are an ethnic group that share a common Italian culture, ancestry and speak the Italian language as a mother tongue. Within Italy, Italians are defined by citizenship, regardless of ancestry or country of residence , and are distinguished from people...
explorer, financier
Financier
Financier is a term for a person who handles typically large sums of money, usually involving money lending, financing projects, large-scale investing, or large-scale money management. The term is French, and derives from finance or payment...
, navigator and cartographer. The Americas
Americas
The Americas, or America , are lands in the Western hemisphere, also known as the New World. In English, the plural form the Americas is often used to refer to the landmasses of North America and South America with their associated islands and regions, while the singular form America is primarily...
are generally believed to have derived their name from the feminized
Grammatical gender
Grammatical gender is defined linguistically as a system of classes of nouns which trigger specific types of inflections in associated words, such as adjectives, verbs and others. For a system of noun classes to be a gender system, every noun must belong to one of the classes and there should be...
Latin
Latin
Latin is an Italic language originally spoken in Latium and Ancient Rome. It, along with most European languages, is a descendant of the ancient Proto-Indo-European language. Although it is considered a dead language, a number of scholars and members of the Christian clergy speak it fluently, and...
version of his first name
Given name
A given name, in Western contexts often referred to as a first name, is a personal name that specifies and differentiates between members of a group of individuals, especially in a family, all of whose members usually share the same family name...
.
Amerigo Vespucci was the third son of Ser Anastasio, a Florentine notary and son of Amerigo Vespucci, and Lisabetta. Amerigo Vespucci was born and brought up by his uncle in the Republic of Florence
Republic of Florence
The Republic of Florence , or the Florentine Republic, was a city-state that was centered on the city of Florence, located in modern Tuscany, Italy. The republic was founded in 1115, when the Florentine people rebelled against the Margraviate of Tuscany upon Margravine Matilda's death. The...
, in what is now Italy.

What is a description of Amerigo Vespucci's region

What was he searching for

Where did he go to school?

I need information on his family and his uncle who raised him. When, Where and how did he die?

What were the results of Vespucci's voyages?
More

Tell me how old he was when he died

What age did he died in
More
x