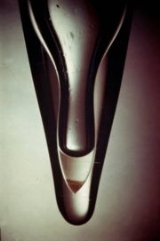 Overview
Americium is a synthetic element
Synthetic element
In chemistry, a synthetic element is a chemical element that is too unstable to occur naturally on Earth, and therefore has to be created artificially. So far 30 synthetic elements have been discovered—that is, synthesized...
that has the symbol Am and atomic number
Atomic number
In chemistry and physics, the atomic number is the number of protons found in the nucleus of an atom and therefore identical to the charge number of the nucleus. It is conventionally represented by the symbol Z. The atomic number uniquely identifies a chemical element...
95. This transuranic element of the actinide
Actinide
The actinide or actinoid series encompasses the 15 metallic chemical elements with atomic numbers from 89 to 103, actinium through lawrencium.The actinide series derives its name from the group 3 element actinium...
series is located in the periodic table
Periodic table
The periodic table of the chemical elements is a tabular display of the 118 known chemical elements organized by selected properties of their atomic structures. Elements are presented by increasing atomic number, the number of protons in an atom's atomic nucleus...
below the lanthanide
Lanthanide
The lanthanide or lanthanoid series comprises the fifteen metallic chemical elements with atomic numbers 57 through 71, from lanthanum through lutetium...
element europium
Europium
Europium is a chemical element with the symbol Eu and atomic number 63. It is named after the continent of Europe. It is a moderately hard silvery metal which readily oxidizes in air and water...
, and thus by analogy was named after another continent, America
Americas
The Americas, or America , are lands in the Western hemisphere, also known as the New World. In English, the plural form the Americas is often used to refer to the landmasses of North America and South America with their associated islands and regions, while the singular form America is primarily...
.

Americium was first produced in 1944 by the group of Glenn T. Seaborg
Glenn T. Seaborg
Glenn Theodore Seaborg was an American scientist who won the 1951 Nobel Prize in Chemistry for "discoveries in the chemistry of the transuranium elements", contributed to the discovery and isolation of ten elements, and developed the actinide concept, which led to the current arrangement of the...
at the University of California, Berkeley
University of California, Berkeley
The University of California, Berkeley , is a teaching and research university established in 1868 and located in Berkeley, California, USA...
. Although it is the third element in the transuranic series, it was discovered fourth, after the heavier curium
Curium
Curium is a synthetic chemical element with the symbol Cm and atomic number 96. This radioactive transuranic element of the actinide series was named after Marie Skłodowska-Curie and her husband Pierre Curie. Curium was first intentionally produced and identified in summer 1944 by the group of...
.

When was it found
More
x