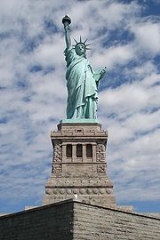 Overview
The American Dream is a national ethos of the United States
United States
The United States of America is a federal constitutional republic comprising fifty states and a federal district...
in which freedom includes a promise of the possibility of prosperity and success. In the definition of the American Dream by James Truslow Adams
James Truslow Adams
James Truslow Adams was an American writer and historian. He was not related to the famous Adams family...
in 1931, "life should be better and richer and fuller for everyone, with opportunity for each according to ability or achievement" regardless of social class
Social class
Social classes are economic or cultural arrangements of groups in society. Class is an essential object of analysis for sociologists, political scientists, economists, anthropologists and social historians. In the social sciences, social class is often discussed in terms of 'social stratification'...
or circumstances of birth. The idea of the American Dream is rooted in the United States Declaration of Independence
United States Declaration of Independence
The Declaration of Independence was a statement adopted by the Continental Congress on July 4, 1776, which announced that the thirteen American colonies then at war with Great Britain regarded themselves as independent states, and no longer a part of the British Empire. John Adams put forth a...
which proclaims that "all men are created equal
All men are created equal
The quotation "All men are created equal" has been called an "immortal declaration", and "perhaps" the single phrase of the United States Revolutionary period with the greatest "continuing importance". Thomas Jefferson first used the phrase in the Declaration of Independence as a rebuttal to the...
" and that they are "endowed by their Creator with certain inalienable Rights" including "Life, Liberty and the pursuit of Happiness."
Since its founding in 1776, the United States has regarded and promoted itself as an Empire of Liberty
Empire of Liberty
The Empire of Liberty is a theme developed first by Thomas Jefferson to identify America's world responsibility to spread freedom across the globe. Jefferson saw America's mission in terms of setting an example, expansion into the west, and by intervention abroad...
and prosperity.

What's the American Dream for you personally?

What is the american dream ??
More
x