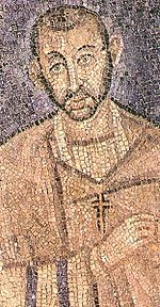 Overview
Aurelius Ambrosius, better known in English as Saint Ambrose (c. between 337 and 340 – 4 April 397), was a bishop of Milan
Roman Catholic Archdiocese of Milan
The Archdiocese of Milan is a metropolitan see of the Catholic Church in Italy. It has long maintained its own rite: the Ambrosian rite. It is led by the Archbishop of Milan who serves as metropolitan to the dioceses of Bergamo, Brescia, Como, Crema, Cremona, Lodi, Mantova, Pavia, and Vigevano.The...
who became one of the most influential ecclesiastical figures of the 4th century. He was one of the four original doctors of the Church.
Ambrose was born into a Roman
Roman Empire
The Roman Empire was the post-Republican period of the ancient Roman civilization, characterised by an autocratic form of government and large territorial holdings in Europe and around the Mediterranean....
Christian
Christian
A Christian is a person who adheres to Christianity, an Abrahamic, monotheistic religion based on the life and teachings of Jesus of Nazareth as recorded in the Canonical gospels and the letters of the New Testament...
family between about 337 and 340 and was raised in Trier
Trier
Trier, historically called in English Treves is a city in Germany on the banks of the Moselle. It is the oldest city in Germany, founded in or before 16 BC....
. His father was Ambrosius Aurelius, the praetorian prefect of Gaul
Praetorian prefecture of Gaul
The praetorian prefecture of the Gauls was one of four large praetorian prefectures into which the Late Roman Empire was divided.- History :...
; his mother was a woman of intellect and piety.

It is not death therefore that is burdensome, but the fear of death.

It did not please God to save his people through dialectic.

When I am at Rome, I fast on a Saturday; when I am at Milan, I do not. Follow the custom of the church where you are.

If you are at Rome, live in the Roman style; if you are elsewhere, live as they live there.
More
x