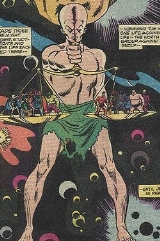 Encyclopedia
Alpha the Ultimate Mutant is a fictional character
Fictional character
A character is the representation of a person in a narrative work of art . Derived from the ancient Greek word kharaktêr , the earliest use in English, in this sense, dates from the Restoration, although it became widely used after its appearance in Tom Jones in 1749. From this, the sense of...
in the Marvel Comics
Marvel Comics
Marvel Worldwide, Inc., commonly referred to as Marvel Comics and formerly Marvel Publishing, Inc. and Marvel Comics Group, is an American company that publishes comic books and related media...
universe
Marvel Universe
The Marvel Universe is the shared fictional universe where most comic book titles and other media published by Marvel Entertainment take place, including those featuring Marvel's most familiar characters, such as Spider-Man, the Hulk, the X-Men, and the Avengers.The Marvel Universe is further...
.

Alpha the Ultimate Mutant first appeared in Defenders
Defenders (comics)
The Defenders is the name of a number of Marvel Comics superhero groups which are usually presented as a "non-team" of individualistic "outsiders," each known for following their own agendas...
#15–16 (September–October 1974), and was created by Len Wein
Len Wein
Len Wein is an American comic book writer and editor best known for co-creating DC Comics' Swamp Thing and Marvel Comics' Wolverine, and for helping revive the Marvel superhero team the X-Men...
and Sal Buscema
Sal Buscema
Silvio "Sal" Buscema is an American comic book artist, primarily for Marvel Comics, where he enjoyed a ten-year run as artist of The Incredible Hulk...
.

The character subsequently appears in Quasar
Quasar (comics)
Quasar is a fictional character, a comic book superhero in the . He is one of Marvel's cosmic heroes, a character whose adventures frequently take him into outer space or other dimensions...
#14–15 (September–October 1990).

Alpha the Ultimate Mutant received an entry in the All-New Official Handbook of the Marvel Universe A-Z #1 (2006).

Alpha is a being artificially created by Magneto
Magneto (comics)
Magneto is a fictional character that appears in comic books published by Marvel Comics. He is the central villain of the X-Men comic, as well as the TV show and the films. The character first appears in X-Men #1 , and was created by writer Stan Lee and artist Jack Kirby...
, a prominent mutant
Mutant (Marvel Comics)
In comic books published by Marvel Comics, a mutant is an organism who possesses a genetic trait called an X-gene that allows the mutant to naturally develop superhuman powers and abilities...
in the Marvel Universe
Marvel Universe
The Marvel Universe is the shared fictional universe where most comic book titles and other media published by Marvel Entertainment take place, including those featuring Marvel's most familiar characters, such as Spider-Man, the Hulk, the X-Men, and the Avengers.The Marvel Universe is further...
.

Professor X
Professor X
Professor Charles Francis Xavier, also known as Professor X, is a fictional character, a Marvel Comics superhero known as the leader and founder of the X-Men....
telepathically
Telepathy
Telepathy , is the induction of mental states from one mind to another. The term was coined in 1882 by the classical scholar Fredric W. H. Myers, a founder of the Society for Psychical Research, and has remained more popular than the more-correct expression thought-transference...
detects that Magneto and the Brotherhood of Evil Mutants
Brotherhood of Mutants
The Brotherhood of Mutants, originally known as the Brotherhood of Evil Mutants, is a fictional Marvel Comics supervillain team devoted to mutant superiority over normal humans. They are among the chief adversaries of the X-Men...
are active in the area of the Carlsbad Caverns, and he summons the Defenders
Defenders (comics)
The Defenders is the name of a number of Marvel Comics superhero groups which are usually presented as a "non-team" of individualistic "outsiders," each known for following their own agendas...
to launch an attack against them. Magneto and the Brotherhood manage to repel the Defenders for enough time to allow the engineering of Alpha to be completed.

Alpha emerges as an oversized humanoid of subhuman intelligence (he was characterized as "neolithic"). Initially he is only capable of creating force fields as a reflex, and of blindly following Magneto's orders. However, each time he uses his powers, Alpha's cranium widens, causing an increase to his intellect.


The rampant use of his powers eventually elevate Alpha's awareness to a superhuman level. Persuaded by Professor X, he telepathically probes both the Brotherhood of Mutants and the Defenders in order to discover which team was evil. Understanding that Magneto had fooled him into committing malicious acts, Alpha punishes his erstwhile allies by regressing them to infancy. He also restores the United Nations building complex and erases the event from the minds of all onlookers.

Finally, declaring himself too evolved to remain on Earth, Alpha transforms himself to a streak of light and leaves to explore the universe.

Quasar briefly glimpses Alpha, first on the Stranger
Stranger (comics)
The Stranger is a fictional character that appears in comic books published by Marvel Comics.The Stranger first appeared in X-Men #11 , and was created by Stan Lee and Jack Kirby.-Fictional character biography:...
's Labworld, and then during his journeys in the cosmos. From what Quasar saw, Alpha seems to be paired with another highly evolved humanoid named Futurist
Futurist (comics)
Futurist is a fictional character in the Marvel Universe.-Publication history:The Futurist first appeared in Fantastic Four #215-216 and was created by Marv Wolfman and John Byrne....
.

Alpha the Ultimate Mutant possesses telepathy and vast powers enabling him to transmute the elements, reconstruct matter, reverse the aging process, project force fields, teleport himself and others, fly, and survive in the vacuum of space. He possesses telekinetic powers which are enough to lift a 50-story skyscraper and the surrounding land into the air. His powers are not without limits and are presumably weaker than those of the Stranger.

Alpha the Ultimate Mutant originally had a hulking form which likely possessed great strength but lacked enough intelligence to obey one's commands. Within a few hours, Alpha's cranium and brain grew in size and evolved into a being of great intellect with a form to match.

Alpha the Ultimate Mutant stands at 10 feet tall, although he can alter his form at will.