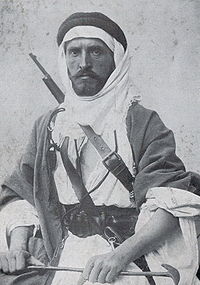 Alois Musil was an Austro-Hungarian and Czech theologist, orientalist
Oriental studies
Oriental studies is the academic field of study that embraces Near Eastern and Far Eastern societies and cultures, languages, peoples, history and archaeology; in recent years the subject has often been turned into the newer terms of Asian studies and Middle Eastern studies...
, explorer and writer.

Musil was the oldest son born into the family of a poor farmer. He was a second cousin of Robert Musil
Robert Musil
Robert Musil was an Austrian writer. His unfinished long novel The Man Without Qualities is generally considered to be one of the most important modernist novels...
, the famous writer http://www.virtualvienna.net/main/modules.php?name=News&file=article&sid=299&mode=threadℴ=0&thold=0.
In the years 1887–1891 he studied Roman Catholic theology at the University of Olomouc, was consecrated as a priest in 1891 and received a doctorate in theology in 1895. In the years 1895–1898 he studied at the Dominican Biblical School in Jerusalem, in 1897-1898 at the Jesuit University of St. Joseph in Beirut
Beirut
Beirut is the capital and largest city of Lebanon, with a population ranging from 1 million to more than 2 million . Located on a peninsula at the midpoint of Lebanon's Mediterranean coastline, it serves as the country's largest and main seaport, and also forms the Beirut Metropolitan...
, 1899 in London, Cambridge and Berlin.

He traveled extensively throughout the Arab world and kept on coming back to it until 1917, collecting a huge body of scientific material. Among his discoveries was the desert castle of Qasr Amra
Qasr Amra
Qasr Amra , often Quseir Amra or Qusayr Amra, is the best-known of the desert castles located in present-day eastern Jordan. It was built early in the 8th century by the Umayyad caliph Walid I whose dominance of the region was rising at the time...
(from the 8th century) with figural Islamic paintings. His unhealthy lifestyle caused him a serious lung disease.

Between his trips Musil kept working on his publications and lecturing. In 1902 he became professor of theology at the University of Olomouc, in 1909 professor of Biblical studies and Arabic at Vienna University. In addition to modern and classical languages he mastered 35 dialects of Arabic.

During World War I
World War I
World War I , which was predominantly called the World War or the Great War from its occurrence until 1939, and the First World War or World War I thereafter, was a major war centred in Europe that began on 28 July 1914 and lasted until 11 November 1918...
he was sent to the Middle East to eliminate English attempts to instigate a revolution against Turkey, thus being an opponent of T. E. Lawrence
T. E. Lawrence
Lieutenant Colonel Thomas Edward Lawrence, CB, DSO , known professionally as T. E. Lawrence, was a British Army officer renowned especially for his liaison role during the Arab Revolt against Ottoman Turkish rule of 1916–18...
. After the war he became a professor at Charles University in Prague
Charles University in Prague
Charles University in Prague is the oldest and largest university in the Czech Republic. Founded in 1348, it was the first university in Central Europe and is also considered the earliest German university...
(1920), despite opposing voices resenting his close ties with the House of Habsburg. He helped to establish the Oriental Institute of the Academy of Sciences
Oriental Institute, ASCR
The Oriental Institute of the Academy of Sciences of the Czech Republic is a research institution specialising in the field of Oriental and African studies . The Institute collaborates with Czech universities providing teaching of relevant subjects, training junior researchers and taking part in...
in Prague (Orientální ústav Akademie Věd, in 1927).

Musil worked for Charles University until 1938, but was active until the very end of his life. He died due to kidney dysfunction complicated by a lung disease.