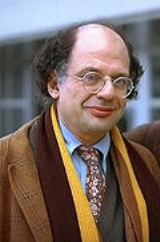 Overview
Irwin Allen Ginsberg icon (June 3, 1926 – April 5, 1997) was an American poet and one of the leading figures of the Beat Generation
Beat generation
The Beat Generation refers to a group of American post-WWII writers who came to prominence in the 1950s, as well as the cultural phenomena that they both documented and inspired...
in the 1950s. He vigorously opposed militarism
Militarism
Militarism is defined as: the belief or desire of a government or people that a country should maintain a strong military capability and be prepared to use it aggressively to defend or promote national interests....
, materialism and sexual repression
Sexual repression
Sexual repression, also known as sexual ethics, is a state in which a person is prevented from expressing their sexuality. Sexual repression is often associated with feelings of guilt or shame being associated with sexual impulses...
. Ginsberg is best known for his epic poem "Howl
Howl
"Howl" is a poem written by Allen Ginsberg in 1955 and published as part of his 1956 collection of poetry titled Howl and Other Poems. The poem is considered to be one of the great works of the Beat Generation, along with Jack Kerouac's On the Road and William S. Burroughs's Naked Lunch...
", in which he celebrated his fellow "angel-headed hipsters" and harshly denounced what he saw as the destructive forces of capitalism
Capitalism
Capitalism is an economic system that became dominant in the Western world following the demise of feudalism. There is no consensus on the precise definition nor on how the term should be used as a historical category...
and conformity
Conformity
Conformity is the process by which an individual's attitudes, beliefs, and behaviors are influenced by other people.Conformity may also refer to:*Conformity: A Tale, a novel by Charlotte Elizabeth Tonna...
in the United States. This poem is one of the classic poems of the Beat Generation.

Where did Ginsberg find inspiration?

America I've given you all and now I'm nothing.

I smoke marijuana every chance I get.

Nobody knows whether we were catalysts or invented something, or just the froth riding on a wave of its own. We were all three, I suppose.