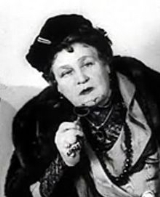 Encyclopedia
Alison Skipworth was an English stage and screen actress. She was born Alison Mary Elliott Margaret Groom in London
London
London is the capital city of :England and the :United Kingdom, the largest metropolitan area in the United Kingdom, and the largest urban zone in the European Union by most measures. Located on the River Thames, London has been a major settlement for two millennia, its history going back to its...
.

Skipworth made her first stage appearance at Daly's Theater in London in 1894, in A Gaiety Girl. Her first American performance came the following year at The Broadway Theatre
The Broadway Theatre
The Broadway Theatre is a Broadway theatre located at 1681 Broadway in midtown-Manhattan....
in New York City
New York City
New York is the most populous city in the United States and the center of the New York Metropolitan Area, one of the most populous metropolitan areas in the world. New York exerts a significant impact upon global commerce, finance, media, art, fashion, research, technology, education, and...
. She sang in light opera in An Artist's Model
An Artist's Model
An Artist's Model is a two-act musical by Owen Hall, with lyrics by Harry Greenbank and music by Sidney Jones, with additional songs by Joseph and Mary Watson, Paul Lincke, Frederick Ross, Henry Hamilton and Leopold Wenzel. It opened at Daly's Theatre in London, produced by George Edwardes and...
. In this production she served as understudy
Understudy
In theater, an understudy is a performer who learns the lines and blocking/choreography of a regular actor or actress in a play. Should the regular actor or actress be unable to appear on stage because of illness or emergencies, the understudy takes over the part...
to Marie Tempest
Marie Tempest
Dame Marie Tempest DBE was an English singer and actress known as the "queen of her profession".Tempest became the most famous soprano in late Victorian light opera and Edwardian musical comedies. Later, she became a leading comic actress and toured widely in North America and elsewhere...
. After performing in two London plays, Skipworth returned to the United States, and made it her home. She joined the company of Daniel Frohman
Daniel Frohman
Daniel Frohman was a Jewish American theatrical producer and manager, and an early film producer.Frohman was born in Sandusky, Ohio...
at the Lyceum. There she made her debut as Mrs. Ware in The Princess and the Butterfly in 1897.

In 1905 and 1906 Skipworth toured with Viola Allen
Viola Allen
Viola Emily Allen was an American stage actress who played leading roles in Shakespere and other plays, including many original plays. She starred in over two dozen Broadway productions from 1885 to 1916...
in three productions of Shakespeare, Cymbeline
Cymbeline
Cymbeline , also known as Cymbeline, King of Britain or The Tragedy of Cymbeline, is a play by William Shakespeare, based on legends concerning the early Celtic British King Cunobelinus. Although listed as a tragedy in the First Folio, modern critics often classify Cymbeline as a romance...
, Twelfth Night, and As You Like It
As You Like It
As You Like It is a pastoral comedy by William Shakespeare believed to have been written in 1599 or early 1600 and first published in the folio of 1623. The play's first performance is uncertain, though a performance at Wilton House in 1603 has been suggested as a possibility...
. In the following years she played with James K. Hackett
James Keteltas Hackett
James Keteltas Hackett was an American actor and manager.-Life:He was the son of James Henry Hackett, a comedian and celebrated Falstaff. His elderly father died age 71 when Hackett was just two years old thus never living to see Hackett grow to an adult...
and John Drew, Jr., among other theater celebrities. Productions in which she was featured are The Swan, The Enchanted April, The Grand Duchess and the Waiter, Mrs. Dane's Defense, and Marseilles.

Skipworth appeared in her first motion picture in 1912, A Mardi Gras
Mardi Gras
The terms "Mardi Gras" , "Mardi Gras season", and "Carnival season", in English, refer to events of the Carnival celebrations, beginning on or after Epiphany and culminating on the day before Ash Wednesday...
Mix-Up. The same year she performed in The Pilgrimage, Into The Jungle, and A Political Kidnapping. She excelled in the new sound medium in films which arrived at the close of the 1920s. In 1930 she made her first talkie, Strictly Unconventional.

Nicknamed Skippy, Skipworth resided in an ordinary Hollywood apartment, drove a Ford, and drank tea daily in her own garden each afternoon when she was not working.

Alison Skipworth died of natural causes in 1952 at her home in New York City
New York City
New York is the most populous city in the United States and the center of the New York Metropolitan Area, one of the most populous metropolitan areas in the world. New York exerts a significant impact upon global commerce, finance, media, art, fashion, research, technology, education, and...
, three weeks short of her 89th birthday.